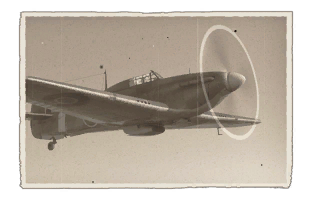 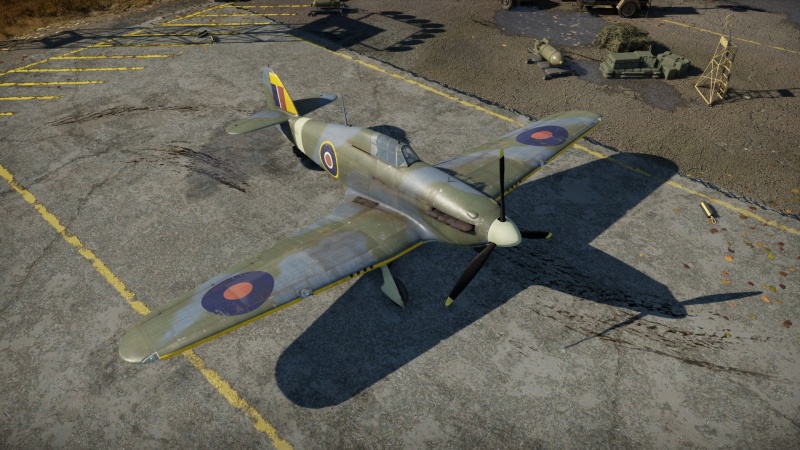 The Sea Hurricane Mk IB is a rank II British naval fighter with a battle rating of 2.0 (AB/RB/SB). It was introduced in Update 1.49 "Weapons of Victory".

As the name implies, this is a carrier based version of the Hurricane. The Mk I/L is the closest counterpart, however several key differences are present. First off, this version can operate from carriers. This grants a massive improvement in versatility, as you can launch from both airfields and carriers. In addition, this variant features reinforced landing gear in order to survive hard carrier landings. However, the extra weight of the landing gear is also the Sea Hurricane's biggest flaw. In Arcade, this makes minimal difference to performance, but Realistic and Simulator are a different story. Climb rate, turning ability, and minimum take-off speed are all noticeably worse. That doesn't mean this is a bad aircraft though. It just takes a pilot with the knowledge of these facts and how to counter them to succeed with the plane. Boom and zoom tactics can be used to greater effect than the Hurricane Mk I/L thanks to improved dive acceleration from the extra mass. The only problem is getting up there. Still, this is a very good aircraft when used properly.

As a naval plane, it comes equipped with arrestor gear.

The Sea Hurricane Mk IB is armed with:

The Hurricane is one of the first monoplane fighters in the British tech tree. As such it will face a mix of biplanes and monoplanes with a different playstyle required for each.

Against biplanes, the Hurricane plays similarly to a heavy fighter. The large number of guns allows you to down anyone in your crosshairs quickly even if you don't have the best aim. Do not try to dogfight biplanes. While it is possible to win a dogfight against biplanes, it will bleed all of your plane's energy forcing you to continue to turnfight any enemies that decided to join the fight even if it is not in your best interest. You are better off BnZing biplanes. They might be able to tickle your rear as you extend away due to their quick turn time and your relatively slow speed but the Hurricane is durable enough to survive some MG fire.

Against monoplanes, the Hurricane must be played in the complete opposite fashion. Your plane will likely be slower and climb far worse than your opponent however your turn rate will likely be better, so try to force them into a turnfight. Monoplanes also generally carry heavier armament so your durability advantage is negated.

Overall the Hurricane is a novice-friendly plane with high firepower and predictable flight characteristics that can be taken to the next level with careful energy management.

The Hawker Sea Hurricane Mk IB was the first carrier-capable Hurricane; the previous Mk IA Sea Hurricane was designed only for catapult assisted takeoff, with no means of recovery back onto the ship. The Mk IB featured catapult spools and an arrestor hook. Starting in July of 1941, the Sea Hurricane Mk IB operated from HMS Furious and starting in October 1941 they operated from Merchant aircraft carriers (cargo ships modified with a flight deck). On 31 July 1941, Sea Hurricanes of 880 Squadron, operating from HMS Furious, shot down a Do 18 flying boat - the first aerial victory of the aircraft. From testing, the Fleet Air Arm (FAA) preferred de Havilland propellers to the Rotol propellers. This was because the heavier Rotol propeller could cause the plane to dip forward and the propeller would hit the carrier deck, while the lighter de Havilland propellers could avoid this issue.