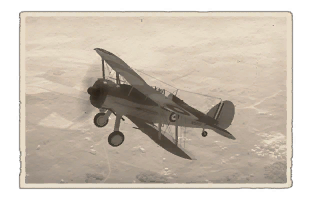 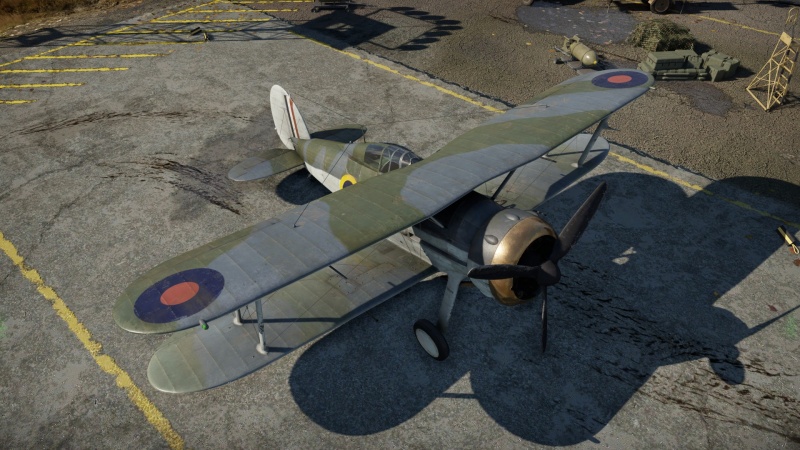 The Gladiator Mk II is a rank I British fighter with a battle rating of 1.7 (AB) and 1.3 (RB/SB). It has been in the game since the start of the Open Beta Test prior to Update 1.27.

The Gladiator Mk II is one of the first British tech tree fighters that can be researched (the other two being the Hurricane Mk I/L and the Sea Gladiator Mk I), and once researched leads into the famous Spitfire fighter line.

At rank I with a battle rating of 1.7 (AB) and 1.3 (RB/SB), this plane will typically be one of the first fighters a new player will research. However, the Gladiator, like its sea-based cousin, may be difficult to seek success in, especially in Realistic Battles mode. Within Realistic Battles, when up-tiering comes into play, it will have to deal with not only biplane adversaries such as the CR.42, F3F and the very manoeuvrable Ki-10, but also more advanced fighters such as the P-40E, Bf 109s, I-16s, and Ki-43s. All these plane types have several varying advantages against the Gladiator, which can make early grinding a bit unbearable for some players.

The Gladiator has four 7.7 mm (.303) Browning machine guns with a total of 2,000 rounds on hand. As with most other 7.7 mm guns the default rounds for the Browning's can be a bit weak in stopping power, but when equipped with tracer belts the four guns on this plane can be a deadly force to be reckoned with, as they can trigger fires and do a considerable amount of damage as a result.

The Gladiator Mk II behaves very well in the sky, it got a decent acceleration to compared single set of wings fighters, but for a Biplane it got a excellent acceleration. manoeuvrability like many other Biplanes of War Thunder it's an excellent turnfighter and avoid bursts with, making it a plane to avoid trying to engage with at close combat. For a biplane it got an excellent speed to get close to the other biplanes but can also keep up with other fighter types can have problem with the acceleration to keep up with certain fighters. Its most important characteristics is being able to turn and keep up with other biplanes, being able to handle up to 11G and -5G make it a good plane to make tight turns without having to be concerned about the G force overload.

The Gladiator Mk II does not have any particular armour on the plane itself, making the pilot exposed to being hit by bullet can be fatal and instantly knocked unconscious. The survivability of the aircraft over all is decent when in its own BR and not facing any cannons other than most 7,62mm and 7,92mm Machine guns. But it's still best to avoid being hit as much as possible in the Gladiator Mk II since it does not have much armour its survivability can be questioned at the damage it can take before going down.

The Gladiator Mk II is armed with:

One of the greatest claims to fame of the Gloster Gladiator was the Siege of Malta, which was, at the time, controlled by Great Britain. Because of the high value of Malta (it is only about 400 miles south of Italy, and on the map, it is an island in the middle of the Mediterranean), the IAF (Italian Air Force) using mainly SM.79 Sparviero bombers began bombing Malta into submission starting June 11, 1940. Due to the remote location of Malta and the fact that the British forces had to cover the Suez Canal, there were very few fighters available to defend against the IAF - so few that, as legend has it, there were only 3 Gloster Gladiators available: Faith, Hope, and Charity. In reality, there were at least 6 Gladiators, and after the first few weeks of the Siege, 4 Hurricanes en route to North Africa were pressed into service. Amazingly, against 40 - 50 bombers in the initial raids, the resistance was fierce enough to force the Italians to send a fighter escort of MC.200 Saetta fighters. By the end of 1940, Malta was nowhere near defeated, and quite, on the contrary, the RAF claimed an impressive 45 kills. However, the antiquated Gladiators were retired, being replaced by more effective Hurricane IIAs and Spitfires.