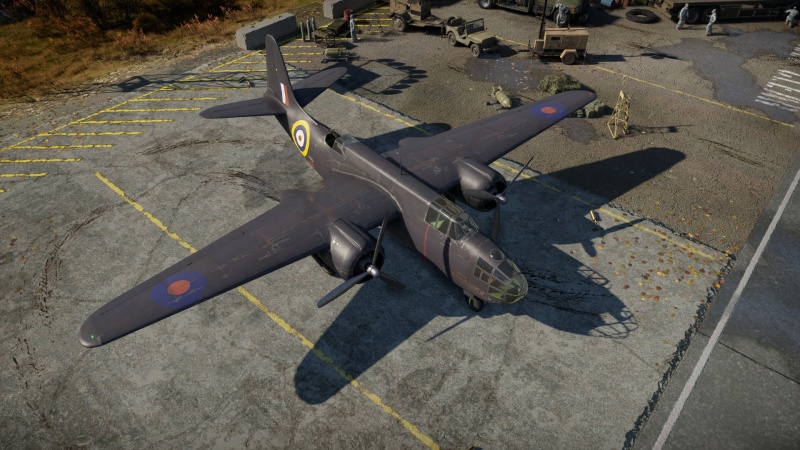 The ▄Havoc Mk I is a premium rank I British bomber with a battle rating of 2.0 (AB/RB) and 2.3 (SB). It has been in the game since the start of the Open Beta Test prior to Update 1.27. The Havoc Mk I is an excellent all-round bomber for its BR. The combination of speed, agility, and a forward-facing armament of 4 x .303 Brownings coupled with 4 x 500 lb bombs makes the Havoc a very versatile platform. Its speed allows the bomber to quickly enter and exit the combat area, run down other bombers or, act as a heavy fighter. The aircraft is capable of flying on a single engine, giving it a higher chance of surviving an engagement and making it back to base. In general, the Havoc has a sturdy airframe, capable of tanking large volumes of rifle-calibre machine gun fire (the most common weapon around its BR). The defensive armament of 2 separate .303 Vickers K machine guns is sufficient.

The relatively high speed of the Havoc gives it plenty of options during a battle, at the start of the battle the player can engage in different valid tactics, such as hunting bombers, bombing ground targets or intercepting climbing fighters. A general advice is to keep altitude, bomb ground targets and then search for enemies to engage. The 4 x .303 Brownings can make short work of any fighter at its BR.

In general, the Havoc Mk I will face slower but more manoeuvrable opponents, especially when they are still climbing to altitude, the player can exploit this by booming and zooming the climbing fighters giving a tactical advantage to its own team. Do not engage in turnfights with enemy fighters.

The most notable enemies for the Havoc Mk I are fast (climbing) fighters such as the Ki-44, MiG-3, He 100, Bf 109 E/F, and heavily armed interceptors such as the Bf 110 C, Pe-3, Yak-2 KABB etc. The fighters can generally keep pace with the Havoc while the interceptors' heavy armament can make short work of your airframe. The best way to engage these opponents is to:

Slower and more manoeuvrable enemies are generally easy to avoid by flying away (use a slight dive). You will however have a hard time engaging them as they can easily avoid your shots.

In 1936 the Douglas Aircraft Company began work on a new ground attack aircraft for the United States Army Air Corps. After liaising with the USAAC to discuss the exact requirements, it became clear that a twin engine design would be necessary for the payload and firepower required. Designed with an unconventional tricycle undercarriage and a modular nose section to allow a quicker change between the bomber or attack role, the new Model 7B first flew in October 1938. However, even after the success of the highly manoeuvrable prototype, the USAAC stated that they had no interest in the Model 7B so Douglas began to investigate their options of selling the aircraft on the export market. France was the first company to order the new DB-7 (Douglas Bomber); but after France was defeated by Germany in 1940, arrangements were made to ship the remainder of France's order to Britain. The DB7 initially entered service with the RAF as the Boston Mk I and was used as a multi-engine conversion trainer.

The British Air Ministry was impressed with the new aircraft, and continued orders from Douglas. Another variant of the aircraft was given the name Havoc Mk I and was fitted with an Airborne Interception radar, additional armour and nose mounted Browning 0.303 inch machine guns to be used as a night fighter. The navigator's cockpit and the nose glazing remained intact. The aircraft was painted matt black and flame damping exhaust systems were installed in an attempt to add an element of night camouflage. A basic set of second flying controls were also added to the gunner's position, as it was impossible to access the pilot during flight and, in the event of an emergency, the gunner could at least attempt to fly the aircraft to a landing if the pilot was incapacitated. A further modification of this was the Havoc Mk I (Intruder) which had four 0.303 inch machine guns fitted beneath the bomb aimer's position.