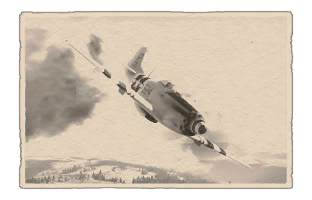 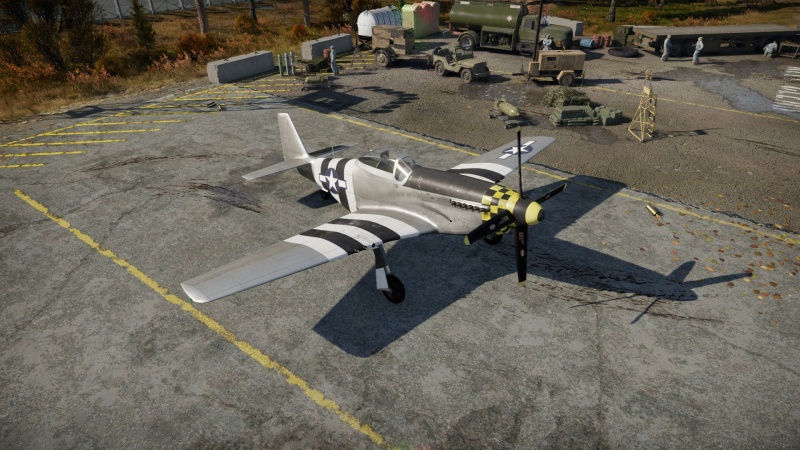 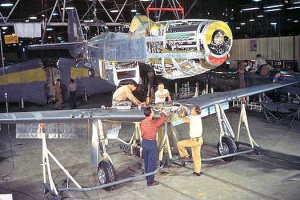 P-51D on the Inglewood assembly line, the fully "semi-monocoque" fuselage lowered on the one piece wing. From -> "Structures of aircraft" article

The stock Mustang has fairly poor performance. Acceleration and climb rate is terrible. This can be rectified by grinding down the performance modifications. The "Offensive 12.7 mm" should be researched immediately for ammo flexibility such as the "Stealth" belt. Avoid researching ground attack modules until you research performance mods first, that includes the very important "G-Suit", as it greatly increases high-speed g-tolerance.

For the D-5 Mustang to work properly as a fighter/interceptor, it needs to maintain its speed to catch enemy aircraft off-guard or to get away when the odds start to look grim. Immediately after spawning, this aircraft should begin its climb to higher altitudes where it can then capitalize on its potential energy, however, side-climbing is recommended otherwise the Mustang will end up in the middle of two layers, lower and slower aircraft which don't climb well and those like the Spitfire, J2M or Bf 109 which will easily out-climb the P-51. Side climbing affords the calculating pilot the opportunity to reach a good altitude from which targets can then be selected and taken out. Here, options will include bomber hunting and Boom & Zooming. Keeping the aircraft's airspeed around 400 km/h (248 mph) will allow the pilot to play more on the offensive than running on the defensive.

Again, while this aircraft becomes difficult to handle when flying slow, it is important to refrain from taking this fighter to the stall point unless you are specifically dragging an enemy fighter into a rope-a-dope or other stall-tactic fighting style. The Mustang does not have a very strong rudder (avoid hammerheads or wing-overs), however, when working into a stall manoeuvre, before the aircraft's energy if fully depleted, perform a Split-S manoeuvre and let gravity help the engine get the fighter into a raging dive. Another option with stall-tactics is to work with a wingman, where one aircraft dupes an enemy to follow up in a climb as energy bleeds off, at that point, a wingman with plenty of energy can dive and take out the climbing enemy when they are reaching their apex and are going to be at their slowest, making for an easy target. Wing mates can alternate roles to ensure a continual supply of enemy aircraft to attack.

While this version of the Mustang is not outfitted with 20 mm cannons, having six 12.7 mm M2 Browning heavy machine guns can still result in devastating damage inflicted on the enemy. There are several options of ammunition which can be outfitted with this aircraft and they all have their purpose, however, utilising the "Tracer" belt can be truly effective. The tracer belt is composed entirely of the extremely effective M20 API-T rounds which when concentrated on a bombers engine or fuel tank can produce some spectacular shows of colour as flames erupt out of the defending aircraft. One thing the pilot must keep track of is the amount of ammunition left after firing because two of the six guns have more ammunition than the other four; at one point damage output will decrease, however, the decrease in weight from the firing of the rounds will increase the aircraft's performance until the reload timer resupplies the aircraft or the pilot returns to base for a reload. Alternatively, for an even more effective method of downing enemy aircraft, use the "Stealth" belt.

The P-51D-5 has many strengths and weaknesses compared to other aircraft in which it will face, the key is to know these limitations and to know which ones you can push and be successful and others which will leave you an easy enemy target. The key point to remember is speed is key, staying around 400 km/h (248 mph) will keep many options open to either run or attack and can be the deciding factor when facing an aircraft with superior qualities and still come out the victor and be credited with the title "rank does not matter."

The MEC controls on this plane are incredibly simple. Put out both radiators to 100%, and keep it like that for the whole game, as your engine will never overheat. Due to the position of the radiators, it gives a small amount of jet thrust to counteract the little drag it creates.