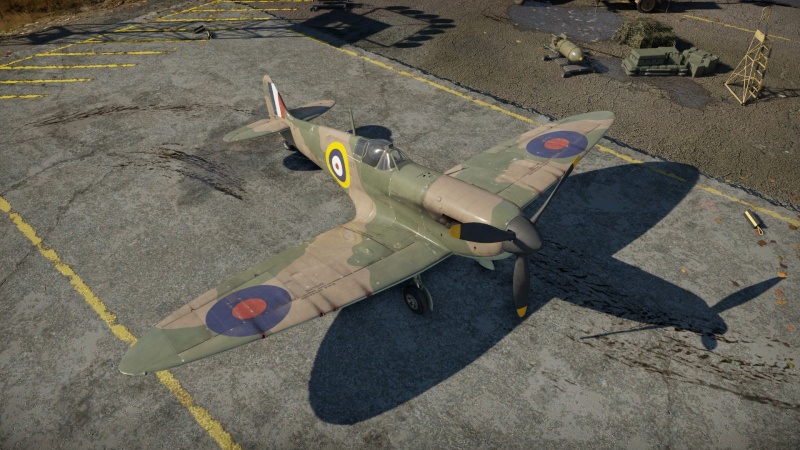 The Spitfire Mk Ia is one of the first monoplane fighter designs in the British tree, alongside the Hurricanes. The Spitfire is distinctive with its sleek and thin elliptical wing design, a characteristic seen in most future Spitfire variants. The wing on the Spitfire is a Type A, which contained four .303 machine guns per wing for a total of eight machine guns.

Its default paint coat consists of a green and tan two-tone colouring, with a white undercoat. The Spitfire Mk Ia possess the Royal Air Force Type A.1 roundel on the fuselage with a yellow outer ring, followed by blue, white, and then a red centre. On the wings, the Type B roundels are painted with a simple blue outer ring and a red centre. The red, white, blue fin flap exists on the tail vertical stabilizer.

The Spitfire Mk Ia has an excellent climb rate and a high top speed of 460 km/h when flying in a straight line. The plane has a decently high wing-rip speed, which should not come into play in controlled dives.

It also possesses a very quick turning ability, although in some situations this can mean that manoeuvring energy retention is worse than one might expect. Roll rate is good at low speeds, but suffers about ~300 km/h.

In general, the Spitfire performs best at low and medium altitudes: below 4,500 m. Above this altitude, engine power and manoeuvrability suffer.

The Spitfire Mk Ia is armed with:

It is recommended to climb at the start of the match, using the Spitfire Mk Ia's excellent climb rate. This can be done efficiently in two ways depending on the preference of the pilot. If you want to get to high altitudes quickly without having covered much distance you can start off with a 26 degree climb until around 4 km (circa 13,000 ft), after which the nose of the aircraft can be lowered down to a 20 degree climb. If you want to get to a higher altitude at a more moderate tempo and cover more distance, the preference is then to climb steadily the entire way up at 20 degrees. The advantage of the first strategy is that you are going to be the highest altitude fighter in the game. The advantage of the second strategy is that you will be ahead of your bases and at the altitude of enemy bombers so that you can take easy head-on passes at them. In those situations, the bombers can be easy kills (if you fail a head-on against a bomber it is not recommended to turn around and attempt to finish off the bomber as the tail, ventral, dorsal and beam gunners would then have the advantage of you flying into their bullets).

The Spitfire is fast, with a top speed of around 600 km/h, although in a straight line it normally only reaches around 460 km/h (which can be higher if you're using MEC). For its BR, the Spitfire Mk Ia's speed is above average overall, being able to reliably outrun aircraft that can outturn it and outturn aircraft that can outrun it. Utilizing its great climb rate, you can dive on faster, heavier aircraft to prevent then from extending away.

The Spitfire is disadvantaged in head-ons due to the lack of armament in the center of the plane, which means you will have to rely on your convergence settings. In a Spitfire, it is highly recommended to initiate turnfight-only engagements. It is possible to fake a head-on (by pulling away once your enemy starts firing) if you're forced to do so by an enemy plane, but it is highly recommended to never commit to a head-on engagement with a dedicated monoplane fighter. A skilled opponent will try to energy fight you, which can catch a Spitfire pilot by suprise. You can lose your energy faster than you realize, and when you do, you've most likely been baited and can be an easy target for the enemy.

The Spitfire has a relatively good ammo count. The 4-digit ammo can will most likely not be deceiving, since there are 8 guns on the aircraft, making around 400 rpg. It is recommended to use the guns at around 400 m to have the most devastating effect. If aimed correctly, your enemy is going to have a bad day. The guns can also be used to attack light or unarmoured ground targets, usually with Stealth or Omnipurpose belts, but dedicated gun-platforms with additional suspended armaments like the Hurricane Mk I/L and Hellcat can perform the job more efficiently than the Spitfire.

When in a fight with an enemy plane which is not Japanese, it is recommended to entice them into a turnfight by waiting until they get close enough and then veering into them, forcing a turning fight.

The Spitfire Mk Ia is a plane known for its manoeuvrability. It is faster than Japanese planes, so if attacked by one, a Rolling Scissors technique or straight dash can be used to evade them. If in a good position, Boom & Zoom can be used: repeatedly strafing and then proceeding to either climb high and energy trap it, or extending away maintaining as much energy as possible. 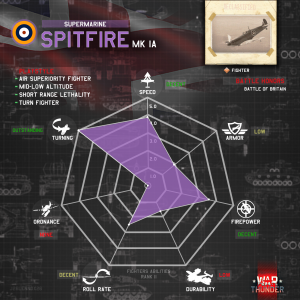 Fighter abilities of the Spitfire Mk.Ia

Despite the British Air Ministry's preference for biplane fighters in the early 1930s, Supermarine designer RJ Mitchell began work on an all-metal construction, single-engine, single-seat monoplane fighter with an enclosed cockpit and retractable landing gear. The Spitfire (Prototype K5054) made its first flight on March 5th 1936, and after demonstrating superb handling qualities, was ordered into mass production for the RAF. The first Spitfires entered service with No.19 Squadron at RAF Duxford in August 1938.

Initially, the Mk I variant was equipped with type A wings and four wing-mounted Colt-Browning Mk II .303 (7.7mm) machine guns, although this was soon increased to eight. Further upgrades included the use of a Rolls-Royce Merlin III engine instead of the original 1,030 HP Merlin II; the original two blade fixed pitch wooden propeller was also replaced with a metal, variable pitch three bladed propeller of either Rotol or De Havilland design. A bulged canopy, bullet proof windscreen, armour plating and hydraulics to operate the gear and flaps were also introduced, partly as a result of the combat experience gained by Hurricane squadrons during the Battle of France.

The first Spitfires had a basic targeting system consisting of a ringed sight, but by July of 1939 a more sophisticated collimator sight, the GM2 Mk II, began to be used; machines already in service were retrofitted with the new sights.

In 1940, 30 aircraft were delivered to front line service for Operational Trials with the new Type B wing; the Spitfire Mk IB was armed with two 20 mm Hispano cannon and four 0.303 Browning machine guns, and the older eight gun fighters were re-designated the Mk IA. However, the drum feed for the 20 mm cannon proved to be very unreliable and prone to jamming, so the Mk IB was withdrawn from service.

At the time of its introduction, right through the Battle of Britain in the summer of 1940, the Spitfire Mk I was considered by many to be the greatest fighter aircraft in the world. By the time the Spitfire Mk II began to replace it, 1,566 Mk Is had been built.

The Spitfire Mk.1A was the iconic British aircraft of the Battle of Britain. Leading Spitfire aces of this battle were: [5]