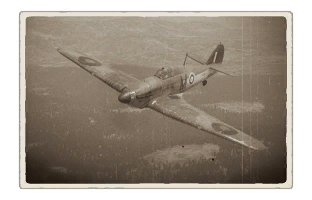 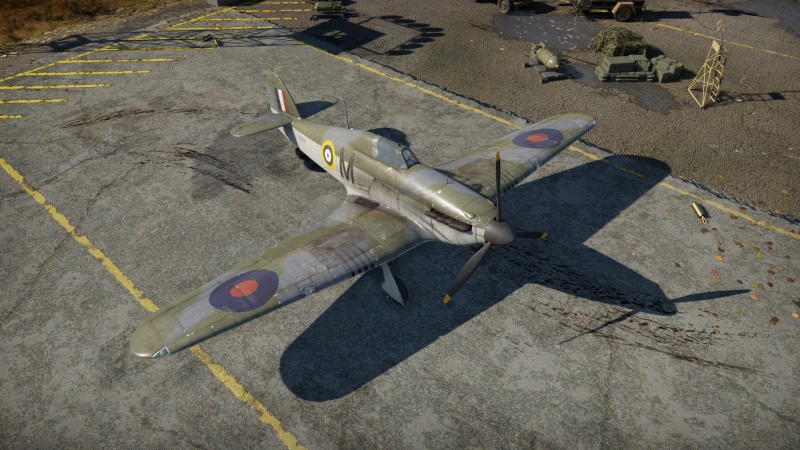 The Hurricane Mk.I/L FAA M is a bit more sluggish in movement and turning than its brethren the Spitfire (Family) but is not an plane to take lightly because its not as agile as the Spitfire (Family) it's still a very manoeuvrable plane and a good dogfighter, having a top speed of 550km/h makes it not the fastest fighter of its BR, but combined with its manoeuvrability makes it a plane to be wary of when facing it in combat. Its manoeuvrability and Speed is not the greatest, it can feel a bit sluggish at low speed and can lock up quite easily at high speed, but when it's at an average speed it can perform very well for a plane, it can hold its own against enemies. Its Strength is that it can get up to a decently speed and it can turn very well compared to other some of the other nations fighters.

The Hurricane Mk.I/L FAA M is armed with:

The strong, sturdy wings on the Hurricane make for an excellent gun platform for pilots. So whilst it may lack the punch of cannons or heavier machine guns, you will find the Hurricane's agility and ability to put accurate fire on targets to be in your favour. The standard "Hawker" style wide track landing gear present on most, if not all of their monoplane fighters is, of course, found on the Hurricane Mk I/L FAA M as well, making this aircraft much more appealing to newer players when landing due to its stability.

In combat the Hurricane Mk I/L FAA M allows pilots to engage almost any aircraft comfortably. Many of the fighters you will face do not have the agility to outmanoeuvre the Hurricane, which will only be surpassed by any biplanes or Japanese fighters you may face. Lone fighter-bombers, attackers, heavy fighters and bombers should also present little threat to the Hurricane as its 8 machine guns provide a dense spread of fire at a fast rate, whilst the rigidity and durability of the airframe will cope with the return fire of the opposing aircrafts' gunners.

The rate of fire and the subsequent lack of ammo are an important issue to keep in mind. It is easy to deplete the entire ammo with a long burst. Trigger discipline is the key here! Furthermore, the Hurricane's heavy weight, due to its old-fashioned tube chassis (unlike the more modern Spitfire with its nutshell chassis design), results in good vertical energy retention, allowing the plane to perform Boom & Zoom manoeuvres with great success. Utilise them as the standard form of fighting in both modes, as unlike in Arcade, regaining energy and speed after a turn fight takes rather long, leaving you vulnerable to fighters who didn't join the conflict earlier.

Countering the Hurricane almost completely depends on what kind of plane you are flying. If you see a Hurricane there are three things to remember: It is extremely good at turning, very durable and it has 8 machine guns, which despite their small calibre are extremely deadly. It will be able to place you in its crosshairs very quickly and saturate you with rounds. The Hurricane Mk I/L FAA M is not without its weaknesses, however. It isn't particularly fast, doesn't dive very well and performs poorly at high altitude.

When countering the Hurricane, you must take these strengths and weaknesses into account and also your own. If your plane is faster than the Hurricane but does not turn as well, you should boom and zoom, diving on the Hurricane from altitude and strafing it as you speed by. In a successful attempt, you will destroy the Hurricane in one pass. However, if you miss or only cause minor damage you may need to make another pass. In no situation should you try to turn fight the Hurricane at this stage. You will bleed energy and it will easily out turn and destroy you. Instead, you should use the speed gained in the dive to climb away, leaving the Hurricane behind. When you have achieved an appropriate altitude and speed you can then turn back and make another pass. This kind of manoeuvre takes patience but is worth it when it comes to fighting the Hurricane. Impatience will only get you out-paced by the Hurricane and shot down. If you want to have a higher success rate with boom and zoom tactics, it is good to choose a well-armed plane. Something with cannons or high calibre machine guns should suffice. Planes like the Bf 109 E-3, MiG-3-34, LaGG-3-8, P-36G and even attackers like the IL-2 (1941) are effective at boom and zoom tactics on the Hurricane.