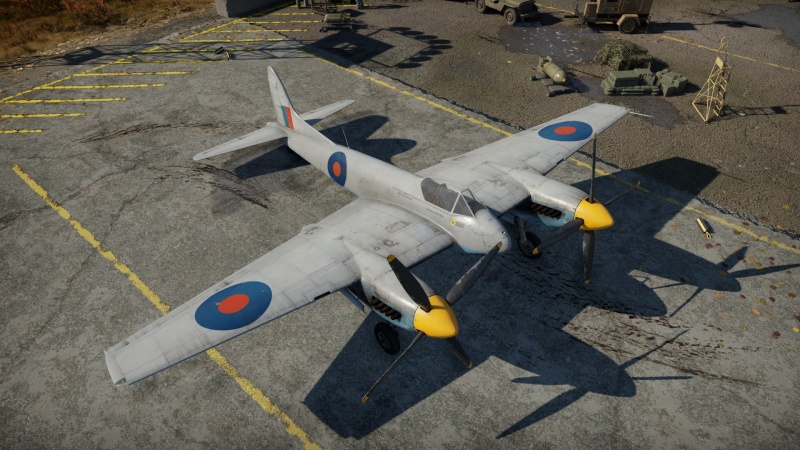 Your intended role of the Hornet decides which upgrades you go for first. When going for a ground attacker, focus on the payload modules and cannon upgrades, with survivability modules coming next due to needing to lower the extra weight the payloads add.

Fighter: The Hornet does very well in a dogfighting situation for a heavy fighter. It can use its powerful quad Hispano Mk.Vs to shred any fighter which falls within its gun sights. The incredible top speed and acceleration/climb rate allow it to gain and maintain energy advantages over most of its competition. From there the Hornet can pick and choose when to attack. Since you cannot fall back on manoeuvrability to shake enemy fighters from your six, playing the Hornet requires good situational awareness and a general understanding of the enemies' top speed, climb rate, and energy, as you must prevent enemy fighters from catching you if you want to stay alive. Never assume you can outmanoeuvre an enemy plane, so always rely on speed and altitude to stay alive. While flying the Hornet can often require periods of extending/increasing your energy advantage before re-engaging, it is important to stay aggressive. Support your teammates whenever you can (clearing enemies from their six, dragging enemies away so they can focus on a single enemy, etc.) or you may soon find yourself alone versus multiple enemy fighters, a situation even the powerful Hornet can struggle in. The Hornet's ability to swoop in, make a high-speed guns pass, then extend away safely vs everything with a propeller can make it a valuable addition to any team. Even if it can't get guns on target, the enemy has to dodge the Hornet and this provides opportunities for more nimble allies to secure easy kills.

However, one should take note that most single-engined fighters (and even some medium bombers) will turn circles around the Hornet, so turn-fighting should be avoided whenever possible. Use the Hornet's high speed, climb rate, and energy retention to stay safe from enemy guns until opportunities to attack present themselves, because the Hornet will not be winning many turnfights. Pretty much any plane with forward-facing guns can cut inside the Hornet's turning radius at most speeds, so never enter 1-circle turnfights. The Hornet can however, win prolonged rate fights vs other poor turners with significantly less engine power (such as Do 335s), as the massive amount of power it generates allows it to maintain speed throughout turns even with the combat/takeoff flaps deployed. This is generally not the best way to fly the hornet, even when the rare opportunity to turnfight presents itself, as a low and slow Hornet is extremely vulnerable to anything that finds it.

Ground Attacker: When upgraded, the Hornet can load 4 AP or RP-3 rockets and two 1,000 lb bombs. This, combined with the performance of the Hornet and power of the Hispanos allow it to be an amazing ground attacker that can shred any ground target in sight. The AP rockets are your best bet when it comes to ground attack, as they are more accurate than the RP-3s, fly faster, impact harder and penetrate more armour. However, when destroying light targets, the RP-3s are better due to the increased explosive filler.