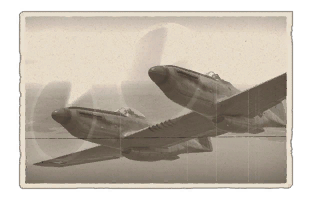 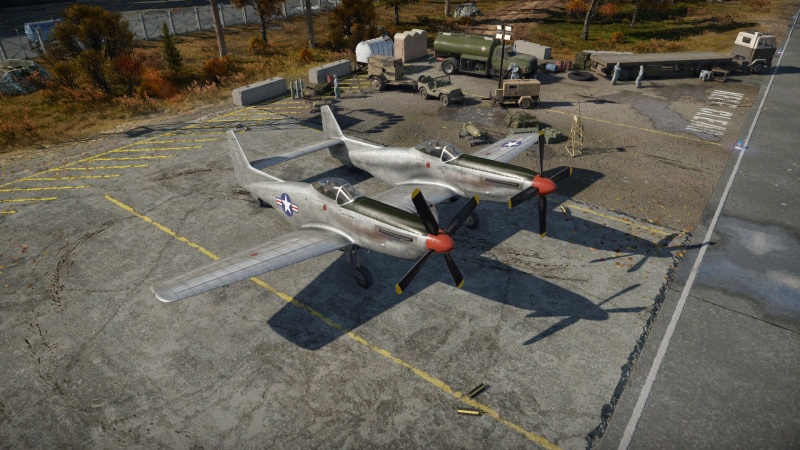 The most distinctive feature about the F-82E "Twin Mustang" is that it literally is two P-51 Mustangs conjoined together into a single aircraft. The F-82E excels as a high-altitude bomber-killer or bomber escort. The F-82E's main assets are its destructive firepower (with the gun pod) combined with massive ammo count, its good climbing speed and its amazing escape speed.

The Twin Mustang has nearly two of everything: two fuselages, two engines, two tails, and two pilots. The last of which makes the Twin Mustang more survivable than most other fighter aircraft as each can work independently if the other is incapacitated.

Built with the intended purpose as a long-range escort for B-29 Superfortress heavy bombers, the fuel capacity in the Twin Mustang is much higher than its contemporaries. This means you will almost never run out of fuel, but you may also burn longer if the fuel tanks are ignited by enemy fire.

Unlike the preceding American aircraft, the Twin Mustang no longer features outer wing-mounted armament but instead are now centre-mounted between the fuselages, so gun convergence is not a huge issue. When using tracer bullets and shooting continuously, it is possible to adjust aim effectively from more than 1.5 km away. In head-ons, this means your opponent will usually be destroyed or crippled well before he gets his own target indicator. With bombers, it means one serious burst from 0.7-1.0 km will deliver a critical, and a full-second burst from less than 0.7 km should cut any bomber into several pieces.

The F-82E can be outfitted with the following ordnance:

While its respectable payload of bombs, machine guns, and rockets make it an effective ground attacker, it is very vulnerable in that role unless all the enemy's fighters have all been neutralized.

Start play by climbing above 5,000 m while always maintaining a speed above 290 km/h. If this brings you in range of enemy fighters before you have achieved a height advantage simply turn away and let them seek other targets. Once you have achieved 5,000 m altitude with airspeed above 300 km/h you are virtually invulnerable since you will always have the option of running away with or without diving. You can seek and destroy bombers. Any fighter foolish enough to go after you should be dealt with head-on starting from more than 1.2 km away to ensure time to adjust and kill with your machine guns. If this is not an option or if you are being engaged by a pair of fighters, or if your initial pass fails to kill, keep running. Very few planes have the ability to follow you and your frame is sturdy enough to withstand the occasional long-distance hit.

As a rule, never let your airspeed drop below 300 km/h; do not go near ground level if there is more than one enemy fighter in the vicinity unless your airspeed is above 500 km/h, and never engage in furballs.

Remember, do not attempt to engage smaller and nimbler fighters, as most of the times you will overshoot and completely miss due to the poor handling.

Boom and Zoom is not an ideal strategy with the F-82. At about 650 km/h you will experience extreme control stiffening. The F-82 excels in the destruction of bombers and other aircraft in head-ons.

In late 1943, North American aviation designers proposed a design project: a new long-range fighter designated the P-82 (NA-120). One two-seat machine was to be created from two P-51D aircraft. The fuselage, one wing (left or right) and the vertical empennage were taken from the production fighter. The fuselages were connected with a new central wing section and a rectangular tailplane. The result was a strong and rigid frame without a central nacelle.

F-82G night fighters participated in the Korean War. On 27 June 1950, the crew of an F-82G from the 68th Fighter Squadron (68 FS) shot down a North Korean plane. It was the first air victory in the Korean War and the first victory of the newly formed USAF.