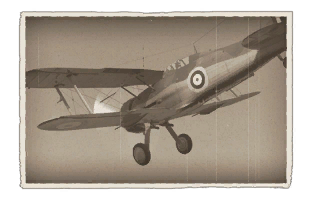 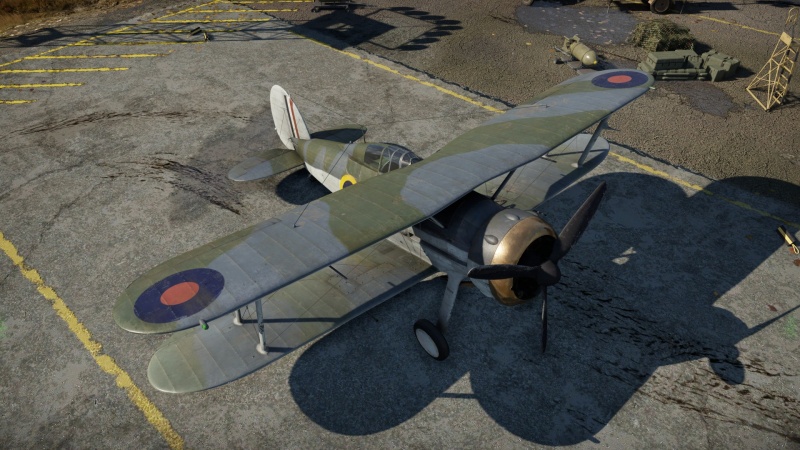 The Sea Gladiator Mk I is the last of the Fleet Air Arm biplane naval fighters and, as the name suggests, is a naval modification of the regular Gladiator seen in the RAF tech tree. As a result, its handling characteristics are very similar to said plane type.

The Sea Gladiator Mk I has very similar performance to the Gladiator Mk II; they are effectively the same aircraft, only the Sea Gladiator has a tail hook, so is slightly heavier and slightly less aerodynamic. This means it has good speed an acceleration for a biplane, and like most other biplanes is far better at turning than the monoplanes it faces; it is also one of a limited number of biplanes with flaps, which are hard to break off and can be used to further improve turning performance.

There is no armour protection on this aircraft, and all modules are focused at the front of the plane. 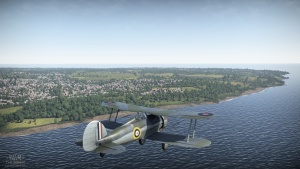 Before engaging a fight, it is better to have an altitude advantage first. When approaching the fight try to figure out which is your teammate and which is the enemy, to avoid going for a second pass, as the energy retention of the Gladiator is rather slow. Also pick your target carefully. For easier aiming, you want to go for those unmanoeuvrable twin engine aircraft like Ju 88 or Ki-45, or bombers if there are any. Given the bad forward and sideways visibility of the Gladiator, these are the best options as they are quite slow and sluggish, and are a bigger target to hit. However getting hits on them doesn't mean good damage, so you must be patient. When dealing with fighters, it is way harder to aim. The elevator control of the Gladiator is quite sensitive, giving it good manoeuvrability, but at the same time, bad handling. The Gladiator will respond in a very fast turn upon moving your stick/mouse by a little bit, which makes tracking nimble planes quite hard. But once you get used to it, try to lure every enemy into a turnfight, as that is where the Gladiator shines. Quite a bit of bullets are required to effectively damage the enemy so you must be patient. If you find an enemy at your six, utilise your great turning ability and simply do tight turns, most monoplanes won't be able to cut inside your turn and they might disengage. However with biplanes you will need some defensive manoeuvres like barrel rolls. 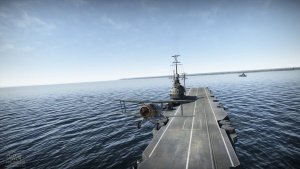 The Gloster Sea Gladiator was, as the name suggests, a naval modification of the Gladiator biplane fighter in use by the Royal Air Force (RAF). Ninety-eight Sea Gladiators were completed: 38 "interim" airframes modified from the existing Gladiator Mk II production line (serial numbers N2265 – N2302), and 60 purpose-built airframes (serial numbers N5500 – N5549 and N5565 – N5574); differences from the Gladiator Mk IIs in service with the RAF included the planes being fitted with catapult attachment points and a tail hook, the airframe being strengthened to withstand carrier landings, and a dinghy lifeboat being made mountable to the underbelly of the plane. As with the Gladiator Mk II it was based off, the Sea Gladiator was powered by a nine-cylinder Bristol Mercury VIIA radial engine rated at 840 hp and mated to a three-blade Fairey metal fixed pitch propeller, and armed with four 7.7 mm (.303) Browning machine guns. 54 Sea Gladiators were still in service with the Fleet Air Arm by the time Britain declared war on Germany in September 1939.

Sea Gladiators saw service in the Atlantic aboard Royal Navy carriers, and in the Mediterranean theatre during the Siege of Malta.

Sea Gladiator Mk I - Great Britain - TERROR on the High Seas! - Jengar
The Shooting Range #40 - Pages of History section at 05:13 discusses the Gladiator.