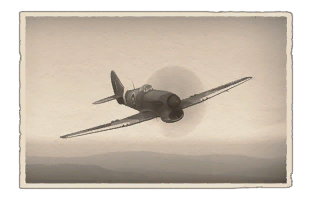 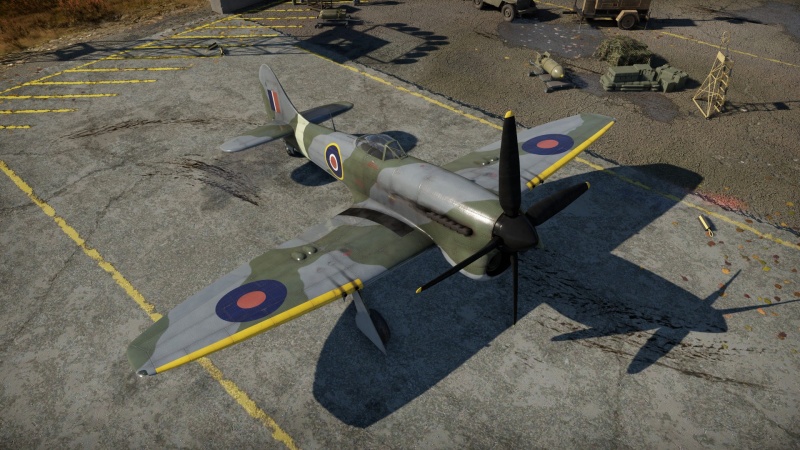 The Tempest Mk.V has a fairly average level of survivability compared to most single engine fighters. In terms of armour, the pilot is protected by 16.9 mm of steel in their seat, and 44.5 mm of bulletproof glass at the front of the cockpit. This armour will protect the pilot against machine gun and some cannon rounds from the direct front and rear, but is fairly weak and does not cover all angles. The Napier Sabre 2 24 cylinder engine is somewhat robust, and should continue to function for some time after being hit with a few rounds. The plane will continue to fly after taking some hits to the fuselage, wings, or tail, but with increasingly dramatic reductions in manoeuvrability as more damage is taken. Especially hits to the wings dis-balance the plane, and make turning especially difficult. Overall the plane should not be expected to survive long against enemies with substantial levels of firepower (such as the MG-151 cannon).

The Tempest Mk V can be outfitted with the following ordnance:

Climb with your team as high as you can muster (<4,000 m) and proceed to feast on anything the Spitfires above drop from their clouds. Speed is life and should never be wasted. Maintaining its velocity is the way of the Tempest in realistic battles.

The Tempest Mk. V excels at low to medium altitude battles, performing both as a Boom'n'Zoomer, ground attacker or energy fighter. To efficiently utilise its full engine power, do not get above 6,000 m or 19,000 ft, as the engine power drops significantly beyond that point. However, due to the supercharged engine, it outperforms aircraft like the Fw 190 D-9 by far at high altitudes (over 7,600 m or 25,000 ft) but gets obliterated by Ta 152Hs and some Bf 109 models, such as the K-4s and G-10s. To counter the BF109K-4, pilot Pierre Clostermann was quoted as saying:

"Tempest V. Messerschmitts: I kept on reminding my pilots to keep their speed above 300 mph, for Bf 109s could turn better than we could at low speed, and you had to watch out for the 30 mm cannon in their propeller - it didn't give you a second chance. The best technique was to do a spiral dive, work up to a speed of 450 mph, do a straight climb and then start all over again. The Bf 109s on the other hand, knowing that we dived faster than they did, tried to get us up to 16,000 feet, where our Tempests were heavy and our engines sluggish."

In Arcade battles, stick with WEP on and Boom & Zoom tactics. On realistic you can try the above strategy, but you may find that due to mouse aim some adaptations must be implemented. Don't lose sight of your attacker and be on guard for when his cannon fires. As soon as you see the barrel flash, you have about 0.7 seconds to take your plane out of the way, depending on the distance. At that point, you can throw off his aim by performing a low Yo-Yo to gain more speed and proceed to zoom away if you're below 3,000 m or 10,000 ft, because at this altitude your engine should provide enough power for you to outrun the BF109K-4 or G-10. However, you may find that the Tempest Mk.V is a cinder brick because you accelerate stupidly fast diving straight to the ground. When in trouble at high heights, dive like there is no tomorrow.

As a CAS fighter

Carrying payload vastly superior to that of Spitfires, and performing much better than the Hornet Mk.III when it comes to dogfights, the Tempest Mk V is a good pick for close air support in mixed ground battles. Its 2 x 1,000 lb bombs are enough to take out any tank within a 5 m radius, and the airframe is capable of pulling out of high-speed dives. It also has access to 8 y RP-3 rockets; while they may struggle to penetrate heavier tanks even from the side, a hit on the top of the turret will often knock out the target.

The 20 mm Hispano Mk.V's ground targets belt lacks power to penetrate medium and heavy tanks' turrets even when fired directly from above, but these guns are accurate enough to shoot engine decks from a fair distance, which often knocks out the engine and/or sets the fuel tanks on fire, even with just a few shots.

Eventually, once all ordnance has been expended, you can play an air superiority role by relying or your speed.