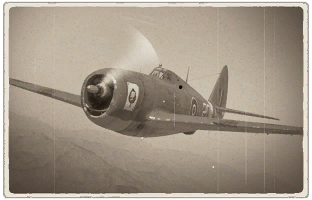 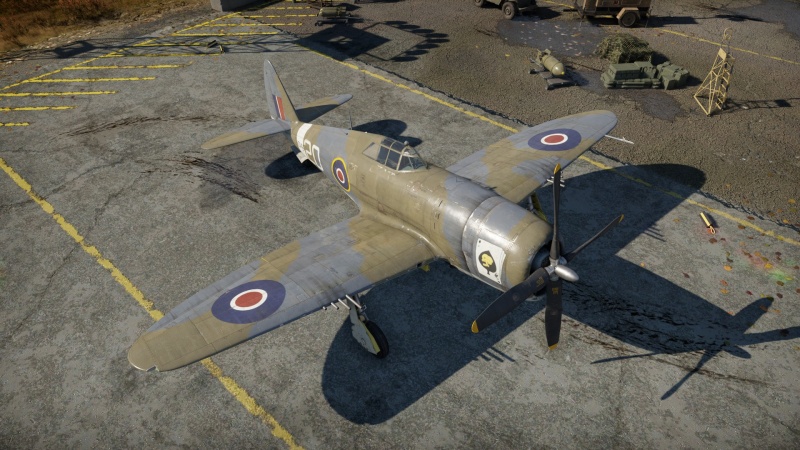 The ▄Thunderbolt Mk.1 is a premium rank III British fighter with a battle rating of 3.7 (AB/RB/SB). It was introduced in Update "Raining Fire".

In Arcade Battles, the P-47 can be pushed to its limits. Climb rate, turn rate, and responsiveness are all dramatically increased. Still, tactics used in RB also apply very well in Arcade- this fighter is great for practising Boom & Zoom in Arcade due to the impressive climb rate in this mode. However, the skill will not be built nearly as well in this mode, as rolling scissors and "skidding" manoeuvres will not really be needed.

In Simulator/Enduring Confrontation, bulkier planes that suffer in AB & RB shine and that, of course, includes the P-47. Sitting at BR 3.7, the lowest BR for rank 3 EC, it can respawn infinitely which makes it a great learning platform for new EC players. In Sim, the P-47 has great control handling, fast speed, and a wide range of additional armaments of bombs and rockets, plus the original 8 x .50 cal, meaning it is an excellent multi-role aircraft. However, compared to the later Jugs with the all-clear bubble canopy, the razorback P-47 has worse visibility. The front has quite some frames around the gunsight, but they are thin which is good news. The sides are overall unaffected. The rearview, however, is greatly obstructed by the razorback, preventing the pilot from seeing what's on the tail which can be fatal sometimes.

The P-47 can perform base-bombing, ground-pounding, bomber intercepting and traditional BnZ fighting. Sim is different from realistic, so discard the habit of bringing the least fuel. Bring at least 30 minutes of fuel, although it decreases the plane's performance a bit, it prevents constant refuelling which saves time for patrolling and fighting.

For base bombing, choose the maximum setup of 1 x 500 lbs and 2 x 1,000 lbs to maximise the damage. The fastest way to get to a base is to remain at tree-top level upon taking off. This way there is no need to climb so the P-47 can pick up quite some speed like that, even with the full bombload. It is also harder to be seen since the P-47's dark colour will blend in with the ground for some maps. When approaching the base, check its position with the minimap to ensure it's the right target. When the base fills up the gunsight, pull up to around 500 m and then dive at the base at a rather shallow angle. When the gunsight slices past the furthest edge of the base, release all the bombs, bank to the direction of the nearest friendly airfield, descend back to tree-top level and fly back. If you are lucky, you might even catch some enemy bombers that just took off from a nearby airfield. They will be some nice RP for you. Overall, base bombing is the safest way to get rewards but not the most efficient.

For ground-pounding, you can choose to take the full bombload if you want. Use the bombs to take out pillboxes and tanks. The aiming method for bombs is pretty similar to base bombing, but there are differences for the 500 lb and 1,000 lb, as their drop are different and you want to adapt the aim to be more precise because now the targets are much smaller. Dive at a shallow angle to approach the target, try to get as close as possible but avoid crashing into the ground. When the gunsight slices through and just above the target, drop the 1,000 lbs. When the target is at the centre of the gunsight and fills up around 1/3 of it, release the 500 lb. The 8 MGs are perfect for destroying trucks, AA guns and artilleries as they have plenty of ammo. However, constantly watch your surrounding, especially your high 6 o'clock for any incoming enemies.

You want to be more careful when hunting bombers, since with the Sim control (whether it be mouse joystick or a real stick) the plane will manoeuvre much more gently, making itself a great target for the bomber's gunners. Do not follow behind a bomber's 6 o'clock unless you are sure that its tail gunners are unconscious. Chasing behind a bomber makes yourself pretty much stationary for the tail gunners, and you will be showered with bullets. The big radial engine of the P-47 will usually get damaged. Instead, before launching an attack, get an altitude advantage over the bomber by flying around 2 km above it. The bomber should only fill up about 1/6 of your gunsight. The best position for an attack is at the bomber's high 6 so you can adjust the lead much easier. Dive at the bomber, but not directly at it, try to predict where you two will crash by imagining yourself as a missile, that's where you should aim at (deflection shooting). To maximise the damage it is better to aim for their wings and engines, as the fuselage usually soaks up quite some bullets. Only fire when the bomber passes in front of your guns. This short window might seems inadequate to do anything, but the 8 MG on the P-47 are actually quite destructive, as sometimes it only takes one bullet to set the target aflame.

As for dogfighting, because almost all aerial battles in Sim occurs at below 3,000 m, the P-47 can easily climb to this altitude and gather up lots of speed before engaging a battle. The tactic is similar to the RB one above. If, unfortunately, you find yourself being chased at your 6 and you don't know how to do any defensive manoeuvres, do a large, smooth turn towards the nearest friendly airfield to avoid bleeding too much speed. Then shallow-dive towards your airfield. The P-47 can quite easily outrun opponents like the A6M or Bf 109 E but struggles to outrun Bf 109 F/G, Fw 190 A or other P-47. Another way of disengaging is to do a sudden split-S to dodge under the chaser. Average Sim players will now try and see where you went, if not immediately losing track of you. You can then run for your airfield or shallow climb for another attack. 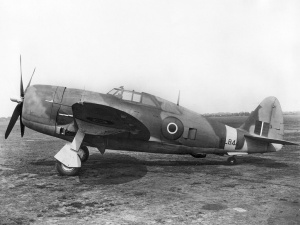 A wartime photograph of a "razorback" RAF Thunderbolt Mk. I in British service.

The United Kingdom became the second-largest user of the P-47 Thunderbolt, which had already become an icon of the Allied air forces. During the course of the Second World War, the country eventually acquires a total of 830 Thunderbolts Mk. I and Mk. II aircraft, based on the American P-47D. These aircraft served in the Eastern theatre between 1944 and 1946, gaining a reputation for being a highly durable bomber escort and ground-attack fighter[1].

The Thunderbolt Mk I started entering service with the RAF in 1944, far later than it's American counterparts. Though initially disliked by RAF pilots due to its massive size (almost three times as heavy as the Spitfire Mk. IX), the aircraft soon became popular with pilots due to its ruggedness. The P-47 was appropriately nicknamed 'Jug', due to it's similar appearance to a milk jug[4].

As the British Thunderbolt was unneeded in the European theatre, the aircraft was diverted to fight over the skies of East Asia. The Thunderbolt's ruggedness, long-range and impressive low-altitude performance made it an ideal replacement for the RAF Hurricanes that were stationed in Burma at the time[1]. The aircraft soon gained a reputation for being a highly effective ground-attacker, wreaking havoc against Japanese convoys. The aircraft also served as a high-altitude bomber escort, accompanying RAF B-24 Liberators on their bombing runs[1].

Following the end of the war, most RAF Thunderbolt squadrons retired their old aircraft and converted to the newer, faster Hawker Tempest. However, some units were sent to Batavia (present-day Jakarta) in an attempt to reintroduce Dutch colonial rule[1]. These aircraft were used extensively in ground-attack roles, dropping bombs against the Indonesian guerillas. The last RAF P-47 Squadron retired their 'Jugs' in 1946[2], ending the P-47's service life with the Royal Air Force.