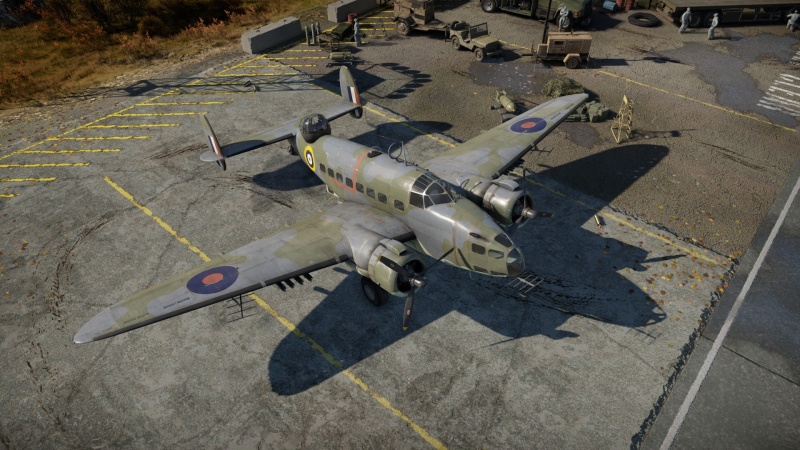 Fast for its battle rating, the Hudson Mk V is a very versatile bomber, able to turn with some single-engine fighters and outrun any it may face.

The Hudson excels in ground attacking with its respectable payload of bombs, rockets and dual-mounted 7.7 mm - meaning it has a lot of firepower to throw at the ground units. It can also be used as a designated bomber, having a load big enough to take out one base and damage another. However in RB, you may find the Hudson to be best for bomber hunting and keeping the enemy fighters down as its fairly fast and manoeuvrable. To take on bombers, it is advisable to position yourself in front of or below an enemy bomber (wherever their firepower is weak) as the Hudson has no armour to protect the pilot. You can then light them up with the dual-mounted Browning 7.7s on the dorsal turret, which has a full 360° field of view and good elevation. Use AP belts to compensate for the relatively low calibre of the armament.

The Hudson is a hard target to take out, with three rear facing MG's being enough to take on most of what it will find at its BR. The Hudson's airframe is also able to withstand a fair amount of punishment. It also outperforms many aircraft it will face such as the early Bf 109s at high altitude, being able to even outrun some fighters at its BR with its cruising speed of over 350 km/h. Despite a lack of armour for the gunners, they seem to rarely get taken out - but it is advisable to keep fighters at bay from a fairly long range with your gunners as once they get close they can inflict serious damage. The Hudson almost never recover from engine fires either, which are almost always caused by fighters close on your tail - another incentive to keep them back.

The Hudson Mk V is a British designation for a variant of the Lockheed Hudson, an American-built light bomber and maritime reconnaissance aircraft of the Second World War. The aircraft was a military conversion of the Lockheed Super Electra civilian airliner, and is one of few civilian aircraft to be successfully converted into military aircraft. Great Britain purchased a total of 309 Hudson Mk Vs; these aircraft were used successfully as anti-submarine aircraft by the Royal Air Force (RAF) as well as the Royal Canadian Air Force (RCAF).

In 1937, Lockheed began advertising a conversion of their Model 14 Super Electra civilian airliner as a light bomber and maritime patrol aircraft: this immediately attracted the attention of the British Purchasing Commission, which sought to acquire the Hudson as a supplement to their existing Avro Anson maritime patrol aircraft. As a result, the British placed an order for 200 Hudson Mk I aircraft in 1938; the Mk Vs were acquired later on, and were essentially Hudson Mk IIIs fitted with new 1,200 hp Pratt & Whitney Twin Wasp radial engines.

In total, 2,150 Hudsons would be used by the British Commonwealth through both direct purchase and lend-lease. These aircraft would serve extensively as maritime patrol aircraft under the RAF and RCAF, scoring numerous kills against German submarines. Additionally, Hudsons were used to provide air cover during the Dunkirk evacuations. Following the cessation of hostilities at the end of WWII, many Hudsons were returned to civilian service, as transport aircraft, trainers and airliners. A total of 2,941 Hudsons were built for all air forces.