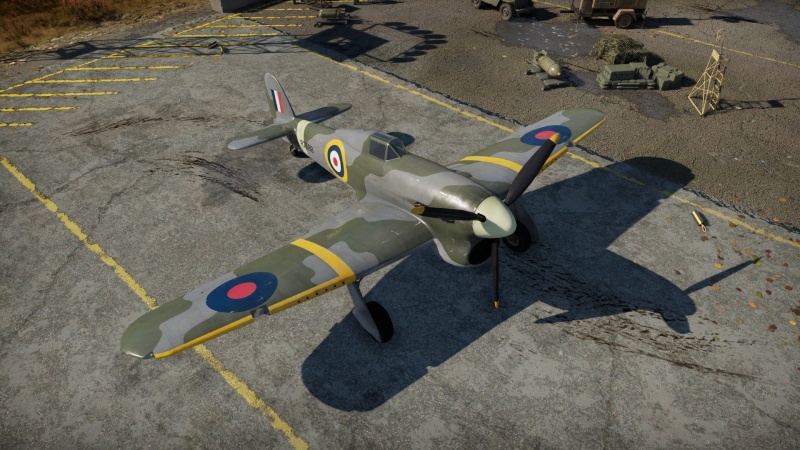 The Typhoon Mk Ia is a rank II British fighter with a battle rating of 2.7 (AB/SB) and 3.0 (RB). It has been in the game since the start of the Open Beta Test prior to Update 1.27.

The Typhoon Mk Ia is a great fighter for the rank it is at. The first thing that a pilot will notice with the Typhoon Mk Ia is that it is insanely fast for its battle rating, so diving at a five to ten-degree angle, if the Typhoon is being attacked or if its attack failed, is a solid choice if the plane has the altitude. However, if playing in Arcade battles with this plane, the diving tactic may not work since the Arcade battle maps are quite small.

Despite its thick wings, the Typhoon is surprisingly good at turning. It can reliably out-turn Fw 190s and other boom and zoom oriented fighters.

Of the rank I upgrades, only Offensive 7 mm is of noticeable effect to allow for belt choice for the 7.7 mm armaments. The next level's Compressor should be the first choice, with Airframe and the HSBC mk.2 as unattractive choices. Having the option of a last-ditch ground attack with the bombs may save the occasional game though. For rank III: Engine, New 7 mm MGs and Wings repair in that order, just having the ability to perform long, accurate burst fire (against bombers) makes the armament upgrade worthwhile. The last level is Engine Injection. The remaining modules can be chosen for research by personal preference.

The Typhoon Mk Ia 's signature 12 x 0.303 calibre machine guns means quite a lot of gun for a plane, though the drawback to the gun amount is that they are all rifle-calibre and such the Typhoon's firepower is drawn from the mass amount of bullets that can be laid out. The large amounts of bullet fired works as with the right belt, the Typhoon has a large chance to set fires with the high amount of incendiary in the machine gun belts; for this reason, it is plausible to switch to tracer, as 100% of the tracer belt contains incendiary. Be warned: the tracer rounds are much less powerful than the regular ones, so keep that in mind.

Another plausible idea when flying the Typhoon Mk Ia is to uninstall the New 7.7 mm machine guns modification once it has been unlocked. This will increase the weapon's spread and turn the plane into a flying shotgun, but also increase the chance of gun jamming. To reduce the risk of this, boom and extend with this plane and keep firing bursts disciplined, only firing once within 500 m with a convergence of 400 m to make the best use of the rather weak 7.7 mm machine guns.

In regards to air arcade battles, it is advised to use Boom & Zoom tactics, as the aircraft's high power (for battle rating 2.7) and wing loading allows for high speed passes on lower flying planes. With the Typhoon's engine providing 2,000 WEP horsepower, there is a lot of energy for a player to use against their opponents.

When encountering fighters, avoid turn-fights most of the time as this aircraft simply doesn't turn well except against the Fw 190 and most American planes, with the exceptions being the F4F-3, the F4F-4, and the F6F-5. Do rudder turn in 1-v-1s and use the combat flaps; against Arcade players, the Typhoon will win the majority of the time, as Arcade people generally don't know the rudder-turn trick.

Set gun convergence at or in excess of 400 m, as 500 m seems to work the best for Boom and Zoom. Do note that due to the fact that in Arcade wing-rip is a non-element, the Typhoon can dive down in excess of 3 km to chew up enemy planes going for ground targets, then climb back to altitude with the remaining prey none the wiser.

Play the Typhoon wisely, as none of these tips will be of any assistance if a pilot persists in flying straight into furballs

The biggest threat to the Typhoon in a downtier is the He 100 D-1 as it can match the Typhoon for top airspeed in level flight, however, the Typhoon can potentially accelerate and out-turn it, meaning that the Typhoon is not without hope.

In an uptier or midtier match there are many more threats: the Bf 109, which can shred the plane with its cannons, has a better climb rate and turn rate, and generally outperforms the Typhoon in all but speed; the Italian planes, which are generally powerful and require situational counters; and the Ki-44-II. The Ki-44-II is arguably the most dangerous of them, as its maximum speed nearly equals that of the Typhoon's at a similar altitude, its turning rate is better and its climbing rate exceeds the Typhoon's by at least one metre per second. Beating the Ki-44 requires discipline and good aim; do not turnfight, as the Typhoon cannot keep up with the lighter Japanese plane. Do note that the Typhoon performs better at high altitudes - in excess of 5,500 m or 18,000 ft. Do not engage in turning engagements except with Fw 190s.

If all else fails, run on the deck: the Typhoon can reach in excess of 550 km/h with WEP at 150 m (500 ft) in RB, 512 km/h without, and outspeeds almost every other plane at its battle rating. The Typhoon's WEP is exceptional and lasts far longer before overheating than most other planes in the game at every altitude. Her rate of cooling also sits in the top half of those planes in War Thunder - especially after the Rank II Spitfires got their engine rework.

Against a skilled pilot, the A6M2 and A6M3 are non-issues; they simply do not have the speed, climb rate, or toughness to compete. Do be aware that if these planes catch a Typhoon at low speed and low altitude, they will very easily destroy the Typhoon. If the Typhoon pilot is fortunate enough to possess some altitude, he will pitch down, run, then climb until the plane has the energy to re-engage.

The Hawker Typhoon was a single-seat, all-metal monoplane fighter, first designed as a high speed interceptor.