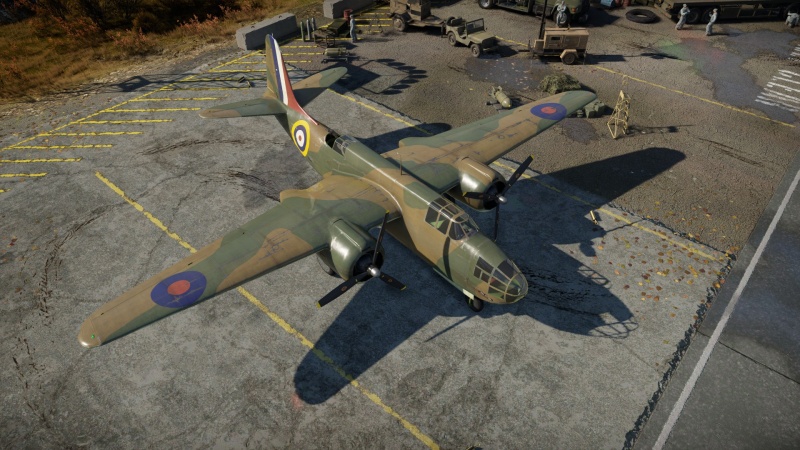 The ▄Boston Mk I is a premium gift rank II British bomber with a battle rating of 2.3 (AB/RB/SB). It has been in the game since the start of the Open Beta Test prior to Update 1.27. It was available for a limited time for the 2014 anniversary of the A-20 Havoc's first flight, later it appeared in the Warbonds shop as part of the trophy chest in September 2018 and currently is only available though the Marketplace.

The Boston Mk.1 is a very fast aircraft for its rank, this means that in a decent matchup it can often outrun most if not all the aircraft it faces in level flight. The Boston has got four 7.7 mm guns in the nose and two 7.7 mm in the top and bottom lower and upper of the rear fuselage.

Although the defensive armament may seem rather underwhelming, if it faces lower BR planes they can be more than adequate and can still be made to work against higher level planes. You should load a belt made up of either armour piercing or armour piercing incendiary rounds and aim for the engine of enemy plane(s) that are on your tail; this will likely do one of these things: 1) Destroy the enemy plane's engine 2) Set the enemy plane on fire 3) Knock out the plane's pilot (from shots that go astray).

The Boston flies fairly well on one engine.

The Boston Mk I (Great Britain) can be outfitted with the following ordnance:

The Boston is an incredibly fast bomber, being able to outrun everything it will face. The bomb load lacks a bit of punch as it carries the inferior British 500 pound bomb which has much less TNT. Decent defensive firepower means it can defend itself if it has to, but the best defense for the Boston is its cruising speed of 450 km/h to outrun any pursuers.

The Boston excels as a ground strike aircraft, dropping its payload on pillboxes and armoured targets and using its quadruple forward facing 7.7 mms to destroy artillery, AA or vehicles. It can also be used as a strike aircraft very effectively, diving on enemy fighters with its high top speed and damaging them before using the energy to gain altitude again. The 7.7s are unlikely to destroy enemy aircraft outright but can damage vital components like the engine, oil or coolant - forcing the enemy to return to base.

The Boston can take a fair amount of punishment, but it won't last in an extended firefight against enemy fighters on its tail. Being fairly manoeuvrable, evasive measures should be taken as you can't rely solely on the defensive armament to keep you safe - it should be used as a deterrent while you turn. It won't outturn a 109 or similar enemy aircraft, but it will maintain more speed in them, allowing you to get more distance between their guns and your tail. It should also outperform early German fighters at high altitude (above 3.5 km), where the Boston can be used as a bomber hunter.