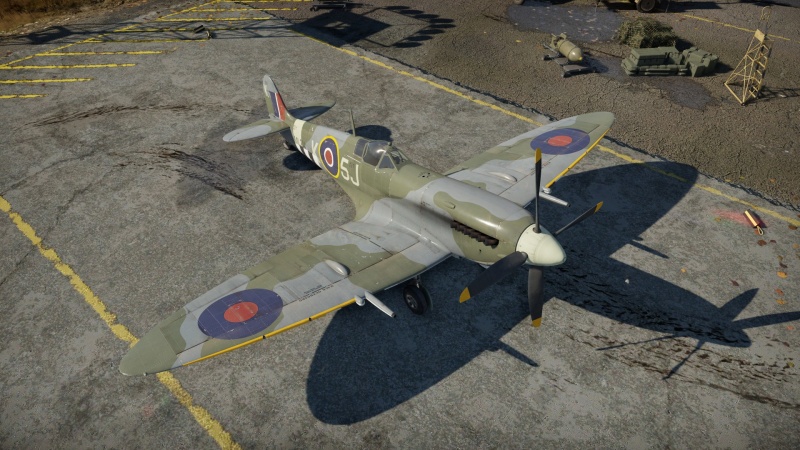 Plagis' Spitfire LF Mk IXc is a premium gift rank IV British fighter with a battle rating of 5.3 (AB), 5.7 (RB), and 5.0 (SB). It was introduced as a premium pack in Update 1.49 "Weapons of Victory" and was removed from the Gaijin store in May 2016. It has been made available again in the store for the 2020 "80th Anniversary of the Battle of Britain" event and the 2021 May sale. It has also been available in-game for Golden Eagles

The plane is painted after the camouflage scheme of the plane used by Southern Rhodesian pilot John Plagis of the No.126 Squadron, Royal Air Force.

Plagis' Spitfire LF Mk IXc can be outfitted with the following ordnance:

As for climbing, the optimal airspeed is 240 km/h, or use 20 degrees for a rush and 30 degrees to gain altitude fast. Do not dive over 700 km/h if this happens, pull up slowly. Wings will rip with positive G forces at 540 km/h after that make small turns. The aircraft can not handle negative G forces at all, only perform under 300 km/h recommended to roll over.