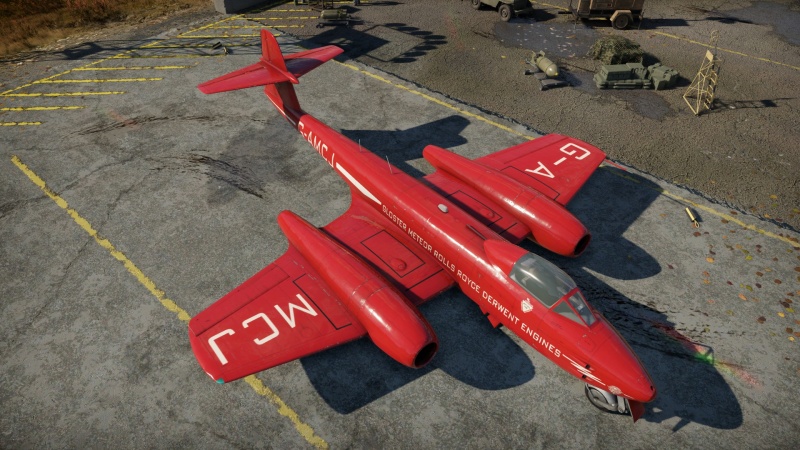 The Meteor F Mk.8 Reaper is a premium rank V British jet fighter with a battle rating of 7.7 (AB) and 8.0 (RB/SB). It was introduced in Update 1.85 "Supersonic" as a premium pack in the Gaijin store, but was discontinued after War Thunder's 7th Anniversary. It was later reintroduced as a premium purchasable for Golden Eagles

The Reaper is a dedicated ground-attack variant based on the 'standard' Meteor F Mk.8 (G.41K) fighter-bomber which did not progress beyond its prototype stage. Thanks to a number of modifications, it would have been capable of carrying twice the payload of the standard Meteor F.8. However, combat experience of the Meteor F.8 in Korea showed that the base type had reached its technical limitations and would have been outclassed in any future conflict; the appearance of more modern types such as the Hawker Hunter and Supermarine Swift - and equivalent foreign designs - led to a loss of interest in the type.

The Meteor Mk. 8 can play both as an energy fighter and a turn fighter. While not as manoeuvrable as a Vampire or a Venom, it can still outturn most of its opposition, but will bleed a lot of precious speed doing so. It's often better to energy trap your target, and save turnfights for emergencies or for times you're sure no third party would interfere.

The Meteor's control surfaces work best in the 400-700 km/h range, but they don't lock up too badly even at the red line. Below 300 km/h, it begins to really struggle, even with flaps out. The rudder is pretty weak, so you will often find yourself slipping to the side for a while after exiting a hard turn.

As any jet, Meteor does not take damage well. Any black wing segment or engine cowling will cut your level max speed to about 550 km/h - way too slow to continue fighting. It also can't return to base on one engine, unless you're already close, as there just isn't enough power to keep you flying level.

Finally, there is no optimal option for fuel load. 6 minutes of fuel is just about enough to take off, fight in a couple of engagements and return, which makes flying from and to the airfield a larger proportion of your game time. 20 minutes load, while more than enough to last you through the entire battle, is considerably heavier, making speed losses that much painful, and therefore it requires more conservative fighting style.

As a ground attacker:

Bombs: Reaper can carry 4 x 1,000 lb bombs, which is just one shy destroying an entire base on most maps. Since it has no air spawn, the best strategy for base bombing is flying close to the ground as fast as possible, sometimes even circling around the map to avoid interceptors. You will often still arrive after your team's attackers and bombers have had their run, at which point it's better to last hit whatever they left. If instead of bases you want to hit ground units, you can also take 500 lb bombs instead for better flight characteristics in exchange for more precision requirement.

Rockets: 24 RP-3 rockets can decimate ground units. However, 2/3 of them are wing-mounted, making them much harder to aim. This loadout adds a lot of drag too, so it's better to go for rockets once the sky is relatively clear.

The Hispano Mk.V's AP rounds can damage light pillboxes, so if you find no enemies to use your ammo on, you can always take out 5-6 pillboxes on your way back for a neat profit.

Initial studies of the GAF foresaw the modification of a standard F.8 airframe with new outer wing panels, fitted with 4 additional 20 mm Hispano cannons similar to the armament lay-out on the Meteor NF.11 night fighter variant, albeit with cropped wing tips similar to those on the standard F.8. This early design initially presented some problematic flight characteristics, mostly linked to the wing's reduced torsional stiffness caused by the wing gun bays: aileron reversal set in at speeds above 885 km/h (550 mph), which was considered unacceptable for a single-seater fighter-bomber. Work was done to rectify this, and eventually the reinforced wings allowed a maximum speed of 965 km/h (600 mph) while retaining the wing-mounted armament of four Hispano cannons with 160 rounds each.

By the time this issue had been rectified, priorities for the design had changed. Rather than focussing on an eight-gun fixed armament, priority was given to the ability to carry an increased payload; as a result, the wing-mounted fixed armament was suppressed, and instead the wing panels were redesigned and restressed to allow the carriage of an increased underwing armament. The stiffened wings and addition of spring tab ailerons increased the type's high-speed handling. Armament options for the redesigned GAF included either a single 1,000 lb GP bomb, or up to 8 unguided 60 lb RP-3 rocket projectiles on each side. So as not to affect the range of the GAF when she was carrying her underwing armament, provisions were made for 100 gal (imp) (454 litre) jettisonable tip-mounted fuel tanks. Additionally, hardpoint mountings were added to the fuselage where the belly-mounted fuel tank was usually fitted, which further increased the Reaper's carrying capacity. These could be used for either additional RP-3 rockets or up to two 1,000 lb bombs. Gloster also designed a belly-mounted pod was designed which could be carried in lieu of the usually-mounted belly tank, and which could carry an additional armament of either 2 x 20 mm Hispano or 2 x 30 mm ADEN cannons, each armed with 100 rounds per gun.

With the design finalised, Gloster financed the construction of a single prototype of the GAF/G.44, which by now had gained the nick-name of "Reaper". The prototype, construction number G5/1210, was registered with the civilian registration G-AMCJ on June 19th 1950, initially receiving Gloster's carmine red house colours, and was demonstrated as such at the 1950 Farnborough air show. As a prototype for the Reaper, she only lacked the airfield arrestor hook and rocket-assisted take-off gear (RATOG) planned for the serial production model.