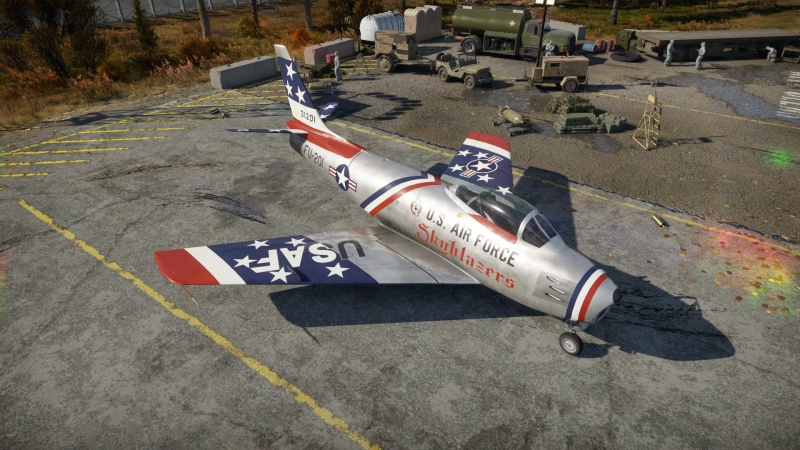 The F-86F-35 Sabre is a premium gift rank V American jet fighter with a battle rating of 7.3 (AB), 8.7 (RB), and 9.0 (SB). It was introduced as a premium pack in Update 1.85 "Supersonic" and was removed from the store after the 9th Anniversary Sale. It was briefly made available for purchase in the store during the 2022 "US Independence Day" mini-event. 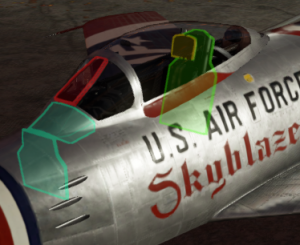 The F-86F-35 isn't very well protected, the armour may only stop small-calibre rounds and the engine and fuel tanks are exposed.

The F-86F-35's acceleration and top speed are excellent compared to its contemporaries. Along with this the F-86F-35's slats allow the plane to have an outstanding manoeuvrability. That said, one must beware of their speed as pulling high manoeuvres at high and max speed can put the plane under great stress which leads to the wings falling apart. The outstanding manoeuvrability comes at the cost of speed. Pulling hard turns will bleed your air speed. Try to climb up before engaging the enemy to ensure you have enough energy to get out of a sticky situation. Hopefully, there will be a chaotic fight underneath you where you would be able to pounce on low-energy fighters with your guns. One advantage the F-86 has over the jets of other nations is the large ammo count of its 6 x 50 cals (1,800) although it would be wise to hit most of your shots. Try staying above 500 km/h as any slower and you would lose a significant amount of energy in a pro-longed turn.

The F-86F-35 is equipped with an AN/APG-30 rangefinding radar, located in the nose of the aircraft. It will automatically detect other planes within the scanning area and display the range to the closest target. It is linked with a gyro gunsight and can help with aiming at close range.