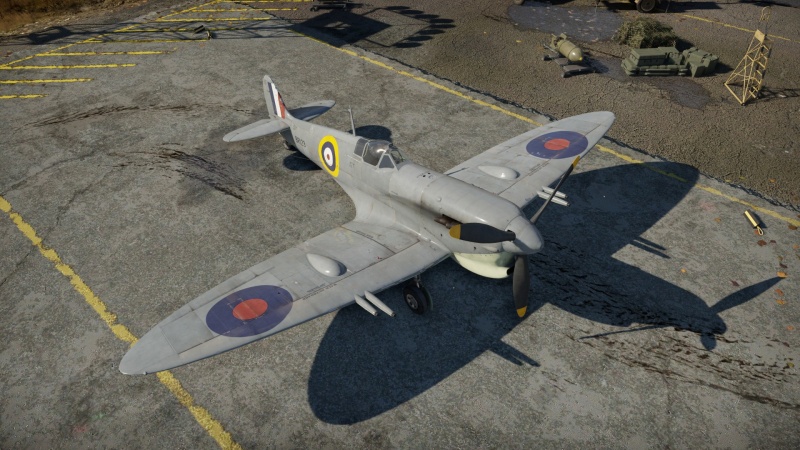 The Spitfire Mk Vc/trop is a rank III British fighter with a battle rating of 5.3 (AB) and 4.7 (RB/SB). It has been in the game since the start of the Open Beta Test prior to Update 1.27, originally under the name Spitfire Mk Vc, however this was changed in Update 1.77 "Advancing Storm" to the current name when non-tropical versions of Spitfire were introduced.

The Spitfire Vc/trop is a plane with two major advantages over its opposition: turn performance, engine performance below 3,000 m, and armament. The plane is blessed with a Merlin 45M engine that grants it phenomenal acceleration below that altitude compared to German opposition, as well as a hard-hitting armament of four Hispano Mark II cannons that gives it an exceptionally high burst mass of 5.17 kg/s- putting it on the same level as the Fw 190 A-5.

Due to its BR of 4.7 in realistic battles, the Vc/trop will be matched against planes such as the Bf 109 G-2/trop, which performs better in the vertical (climbing/diving), or the A6M5, which performs better in the horizontal (turning). In an uptier battle - which is an odd-to-regular occurrence depending on whether players are playing more of rank III or IV aircraft - this aircraft faces opposition such as the Fw 190 A-8, the Fw 190 C, the Bf 109 G-6 the A7M1 (NK9H), and even the Re.2005 serie 0.

While this aircraft faces tricky opposition, it is far from helpless as one might come to expect from an aircraft with the airframe of a BR 3.3 aircraft at a higher BR. If used correctly, this aircraft can easily ruin the day of any axis pilot.

The Spitfire Mk Vc/trop's engine performs best at low altitudes: between the 2,000 m and 3,500 m. At these low levels, the Spitfire has a competitive top speed, and a decent climb rate. Above this altitude, engine performance begins to suffer dramatically, as acceleration and climb rate decrease. The engine's power output can be maximized by using WEP, without which the plane lacks much of its performance. The Spitfire's acceleration in a dive is less than that of the Bf 109 and Fw 190.

Like all Spitfires, the Vc/trop has above-average manoeuvrability, including a good turn rate and competitive roll rate. It also has decent energy retention both in flat turns and vertical manoeuvres. Watch out though, Fw 190s still have better energy retention and roll rate than the Spitfire, and A6Ms can out-roll it on low speeds.

Pilots should invest heavily in the Weapons Maintenance skill of their crew in order to prevent guns from jamming as much. Pilots should only really need the first or second cannon upgrade. The 1943 cannons are useful to have, but not strictly necessary to perform well in this aircraft.

Priorities, in order, are:

The Spitfire Mk Vc/trop is armed with:

The Spitfire Mk. Vc/trop is armed with four Hispano Mk.II cannons with 120 rounds per gun. While this is double the cannon capacity of earlier Spitfires, such as the Spitfire Mk Vb/trop, it is still quite small, and unsuitable for firing long bursts at the enemy.

The Spitfire Mark Vc/trop, unlike the older Mk IIb variant, no longer has overwhelming edges in performance over its opposition. This aircraft is heavier than its predecessors, and has an engine that does better at an altitude range that is much lower than its predecessors. The Spitfire Mk Vc/trop flies best at altitudes between the 2,000 m and 3,500 m range and its engine starts to suffer above this altitude. This plane must be played radically differently in terms of when and where to pick fights. As usual, the 7 P's of Combat apply: Proper Perusal, Planning and Preparation Prevent Poor Performance.

With previous Spitfires, in order to use your plane most effectively, these were more or less suggestions. Flat-turning allowed you to take down enemies relatively consistently even without advanced knowledge. With this Spitfire, and arguably the Spitfire Mk Vb before it, it is absolutely essential to follow these. Without fulfilling these criteria, you will not be able to succeed with flying the Spitfire Vc/trop.

You need to know your opposition inside-out, but also your own plane's performance (Perusal). In order to fight, you need to plan your every move well and have a good idea of how you're going to start your match and at what point you're going to return to base (Planning). You need to know and be prepared to fight enemies that may have better performance than you in a turn, in the vertical, in a straight line, or all three (Preparation).

The ability of a pilot to fight using this plane is determined primarily by their skill and ability to pick their fights against their enemy wisely. Charging head-on into Axis teams, which usually will have an energy advantage over you, will result in the Spitfire's instant and explosive demise at the hands of Bf 109G-2s and C.205s eager to score an easy victory on an allied fighter at a lesser altitude and travelling at a lower speed while within their favoured altitude range (4,000-5,500 m).

Let's just mention that fighting bombers might be a very bad idea unless you are trying to take them from their side and have much speed.

One way to use this fighter to its best advantage is to use it as a "Vulture". Climb to 3,500 m and then proceed to roam around the map looking for aircraft low and slow, or for furballs where an enemy aircraft is pursuing a friendly. Dive on these people and "Bounce" them, shooting and entering a furball with them. These tactics will yield great success, provided that you are not chased yourself in turn.

One important thing to note is that this aircraft, especially while stock, cannot fire its weapons in long bursts. While stock, it will result in quick weapon jamming, and even when upgraded, its ammo capacity is absolutely abysmal. Furthermore, stock Hispanos Mk. II lack accuracy at bigger distances and when placed in wings, it gets even worse, so you shouldn't use them with aiming distances above 600 m. On low distances around 400-500 m with suitable aiming distance, enemy plane can be destroyed with just a single salvo (even without killing the pilot). Spitfire is also able to effectively fight tanks in ground RB. When attacking from above it is able to penetrate most medium tanks and SPGs with AP rounds but in such a situation you should use pretty low aiming distance of around 300 m.