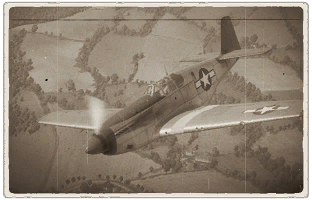 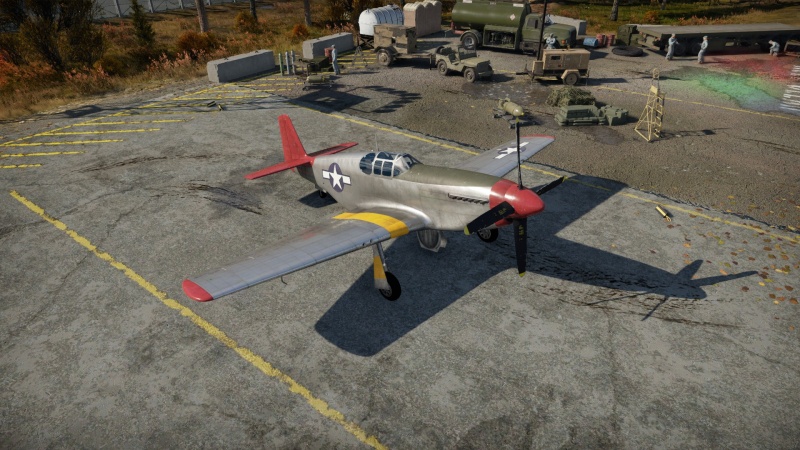 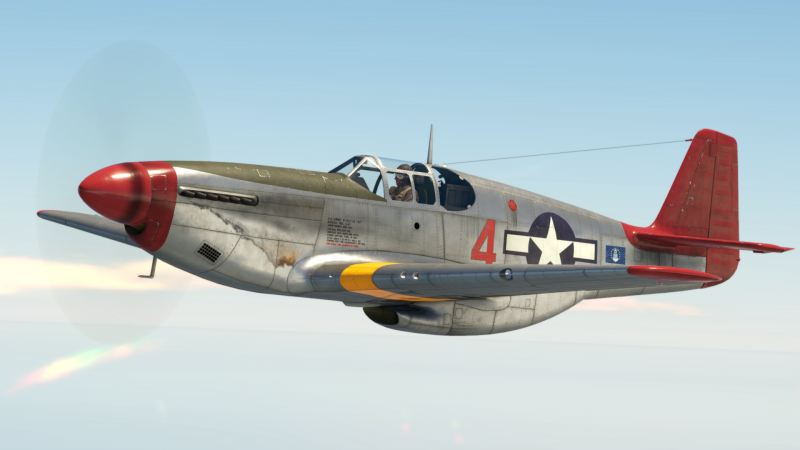 The P-51C and the essentially identical P-51B were the first production P-51 Mustang models equipped with the famous British Merlin engine, license-produced in the United States as the Packard V-1650. While not quite as famous as the later P-51D series with bubble canopies, these "razorback" Mustangs were produced in large numbers and served Allied forces well. The vehicle represented in War Thunder is by default painted in the livery of the 332nd Fighter Group, a distinguished all-African-American unit known as the "Red Tails."

The P-51C-10 handles similarly to comparable Merlin-engined Mustangs like the P-51D-5 and P-51D-20-NA and is slightly better than them in some respects. Its main weaknesses lie in its armament: four wing-mounted M2 Browning machine guns with late-war belts leave some to be desired, and the suspended ordnance is nothing special. Overall, it is still a competitive aircraft and offers a good learning opportunity for later USAF propeller fighters. Succeeding the P-51C is the P-47D-22 RE "Razorback" Thunderbolt, which trades general flight performance for better durability, more engine power at extreme altitudes, and most importantly, massively increased firepower.

Unlike its Rank II predecessors, the P-51 and A-36, this plane performs well not only at low altitudes but also above 3,000 m because of the new Merlin engine and two-stage supercharger instead of one in the Allison powered models. Level speed is exceptionally good at all altitudes compared to the opposition at similar battle ratings. In Realistic Battles, it can reach 610 km/h at sea level and 705 km/h at 7,300 m of altitude. Acceleration is also above average in level flight. The climb rate is good, especially when compared to the other American planes, and is noticeably better than the P-51D-5 and P-51D-20. At low altitude, it is slightly above 20 m/s and the plane can reach 6,000 m alt in about 7 minutes. Diving performance is great as usual, its elevator and other control surfaces do not lock up even at 700-800 km/h IAS and can pull 9G at that speed. Medium and high speed manoeuvrability is good enough to keep up with the Bf 109 G and similar fighters for a while, and the sustained turn rate has been improved over previous Mustangs. Horizontal energy retention is very good, vertical energy retention is good, but manoeuvring energy retention is somewhat below average (but only in RB because of how the instructor controls the plane). Low speed manoeuvrability is still mediocre. The main issue is its rudder, which can lock up above 300 km/h IAS, albeit not to the extent of the P-51D models since the "razorback" fuselage provides better directional stability. The roll rate is not exceptional, veering into poor territory at low speeds.

If using Manual Engine Controls, it is worth mentioning that the Meredith effect is modeled on Mustangs. The cooling system is designed to generate a slight thrust that partially compensates for the aerodynamic drag caused by the radiators. This means that opening up the radiators even to high percentages only causes little effect on energy retention and top speed while keeping the engine nice and cool on WEP settings. This is definitely convenient considering that many contemporary opponents like the Bf 109 F-4 will cook their engines if they run WEP for more than brief periods of time and tend to have draggy radiators.

When flying with full realistic controls, the plane requires some trimming, positive for the elevator (+ 5-7) and rudder or ailerons to the right (but only below 600 km/h IAS) if you want to keep the plane straight in the level flight, when turning the plane tends to roll to the right side. Stall characteristics are outstanding, and with the fuel set to 30 minutes, it stalls out only when the elevator deflection reaches 90%. However, it does have a high stalling speed at 175 km/h without flaps and 155 km/h with flaps.

As mentioned earlier, the P-51C-10's armament is not its strong suit. Four late-war M2 Brownings do not provide much burst mass, and the most reliable way of dispatching enemy aircraft is to set them on fire. For this purpose, the Tracer belt has pure M20 API-T rounds. Tougher targets like Fw 190s can shrug off quite a few incoming rounds. Attackers, twin-engined fighters, and bombers with defensive armament tend to be durable and are also challenging to approach and destroy. Focus on knocking out defensive gunners and igniting engines for best results, though these targets are more easily dealt with by friendly P-61 Black Widows and P-63 Kingcobras. The ammunition supply of ~300 rounds per gun is good, allowing for some spray-and-pray.

Since the guns are mounted in the wings, gun convergence should be considered. Anywhere between 400-600 m should work well, but note that more distant convergence settings will make close range shooting more difficult, especially considering the low volume of fire.

The P-51C-10 can be outfitted with the following ordnance:

The P-51C-10 has the same suspended ordnance as the A-36 Apache, minus the infamous gunpods. The only loadout worth taking is the twin 500 lb bombs. They drop as a pair and have enough power to take out a target or two if dropped with some precision, though they are certainly less impressive than the twin 1,000 lb bombs carried by later Mustangs with their reinforced hardpoints. Do not engage other fighters while carrying bombs, as they are mounted on the wings and contribute significant amounts of drag, weight, and inertia.

The P-51C-10 has outstanding performance compared to other planes that can meet in the same bracket (Enduring Confrontation 3, BR 3.7-4.7). Level speed is higher at all altitudes than the vast majority of things that it can face, so it can easily escape from anything when it finds itself in trouble. The climb rate is also very good and allows it to get to 3,000-5,000 m quickly. This plane, like all other Mustangs, does not overheat when the radiator is set to 90-100%, it also does not slow down the plane, so it can always cruise with enabled WEP, which is not limited, always engage other planes with tremendous speed advantage and make use of very good mid and high-speed manoeuvrability. The sustained climb rate is worse than that of the Bf 109 F-4 or G-2 by 2-4 m/s. Escaping from them by climbing away should be avoided, but it still allows the plane to get pretty quick to 3,000 to 5,000 m; also, the zoom climb is very good.

One issue that the plane has is quite disappointing armament. It takes some time to shoot down the enemy fighters. It is even worse against bombers and attackers with higher durability, but attacking with a speed advantage and surprising the enemy should solve it.

The other issue is the unsatisfactory turn rate at low speed, engaging other fighters in dogfight should be avoided (instantaneous turn rate is reasonable when the plane has lots of energy to spare), especially the Bf 109 F-4, G.55 or Yaks, and anything that can turn better than them, the speed advantage should be used instead to beat them.

The plane, when it is upgraded, can also be used as a starter plane in the higher bracket (Enduring Confrontation 4, BR 5.0-6.3), where it should not have any issues with beating tier 4 German, Japanese and Italian fighters, most of them that can be meet there have very similar performance and the P-51C is even better than the D-5 version in some ways.

The Rolls-Royce Merlin engine was successfully tested on a P-51 Mustang in late 1942, resulting in the production of P-51B Mustangs fitted with the Packard V-1650, a license-produced Merlin. North American Aviation's (NAA) plant in Inglewood, California, was maxing out production of the P-51B, so a new plant was opened up in Dallas, Texas, to increase production. The Mustangs produced in the Dallas plant were designated as the P-51C even though they were identical in all other regards to the P-51B. It was decided during the P-51B and C production run that the aircraft would no longer leave the factory with an olive drab paint, but would instead leave in the unpainted metal finish.

Deliveries of the P-51C to the US Army Air Force (USAAF) began in August 1943, much later than those of the P-51B due to the Dallas plant being in the construction process when the P-51B entered production at Inglewood. A total of 1,750 P-51C Mustangs were built by NAA during the war.

P-51B and C Mustangs began arriving in Europe in August and October of 1943, equipping fifteen fighter groups of the 8th and 9th Air Forces in England as well as the 15th Air Force in Italy. P-51C Mustangs, along with their P-51B brethren, were used by the USAAF 8th Air Force to escort B-17 Flying Fortress bombers on daylight raids across the English Channel: the long range of the P-51B/C Mustang made it ideal for that type of mission. The 9th Air Force used them in the fighter-bomber role. In addition to European operations, P-51C Mustangs were used in the China Burma India Theater (CBI). Even by the end of the war many of the P-51s still in service with the USAAF were of the P-51B and C models, not having been fully replaced by the P-51D and K models but instead only supplemented.