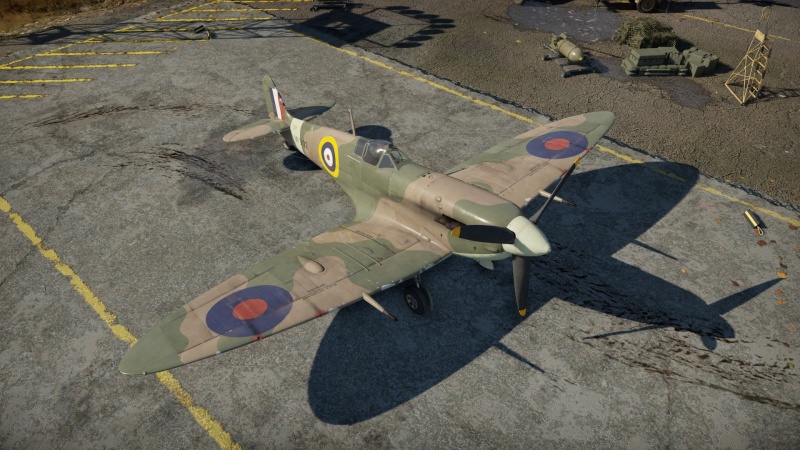 The Spitfire fills the turn-fighter class in the British line. It can perform many fighting tactics, such as energy fighting as well as turn-fighting. It has an impressive climb rate and turn time.

The Mk V variants of the Spitfire series do not have the upgraded Merlin 61 engine, but instead the Merlin 45 and thus may have poorer performance compared to the Spitfire F Mk IX. Its wings can sustain a lot of stress, keeping still at steep dives and tight turns. Its control surfaces are large which means it has considerable control even at higher speeds.

20 mm ground target belts are essential for dealing effective damage to enemy aircraft. The radiator upgrade is extremely useful in combating overheating. Other manoeuvrability upgrades are useful for turn fighting.

The Spitfire Mk Vb is armed with:

The Spitfire Mk Vb fills the role of an aerial superiority fighter in the British tier III lineup. It cannot fulfil any ground attack duties due to its low ammunition count and the absence of any heavy machine guns which can penetrate a tank's thin roof armour. In addition, the aircraft cannot carry any bombs or other air-to-ground ordnance. Like most Spitfires, the Spitfire Mk Vb is meant to be used as a pure aerial superiority fighter, while fighter-bomber duties are relegated to other aircraft, such as the Beaufighter series.

The Spitfire Mk Vb is a well-rounded fighter that can turn excellently. When the plane is not fully upgraded, the Spitfire Mk Vb's Merlin-45 engine has less power than the Merlin-XII engine of the Spitfire Mk IIb. However, once all engine upgrades have been acquired the Merlin-45 is easily a superior engine with better cooling and power, blessing this variant of the Spitfire with better energy retention, better energy retention and better cooling than the Mk I and II Spitfires. The Spitfire Mk Vb has outstanding energy retention and easily gains speed in a dive and retains it after pulling out into more level flight. In addition, it does not lose speed too quickly in a turn and thanks to outstanding acceleration from the Merlin-45, the aircraft easily accelerates after pulling high-G turns that initially bled large amounts of speed. However, the newer, more powerful, and heavier engine and airframe means that the aircraft cannot turn as tightly or as fast as its predecessors.

The Spitfire Mk Vb/trop is armed with two pairs of British .303s with 350 rounds per gun and two Hispano Mk.II cannons with 60 rounds per gun. With such a low ammo count, the cannons should be used sparingly, and at close range. The lower-calibre machine guns may be fired independently of the cannons in order to range the enemy and determine the necessary lead.

Experienced Spitfire Mk Vb pilots use close convergence ranges. Generally, the best convergence range for a Spitfire is 300 metres, since the plane fights best at close-range. The basic strategy that many Spitfire pilots use is a tactic whereby they bait head-ons from enemy aircraft, before evading, and turning around to put shots into the target at close range while the enemy is pulling away. When the Spitfire has the initiative in the engagement and has successfully manoeuvred onto a six-o-clock aspect, it is nearly impossible for the enemy to regain the advantage. Using clever management of the throttle and manoeuvres to gain or bleed energy, an experienced pilot can stay on an opponent's six o'clock indefinitely.

This Spitfire has a good turn time compared to its opposition and cannot be out-turned by anything save for the Japanese Zero. However, the plane has low manoeuvrability at low speeds, and a tendency to lock up in high-speed dives.