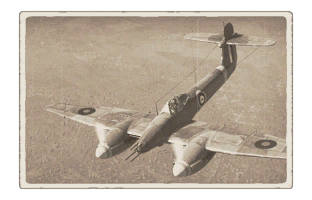 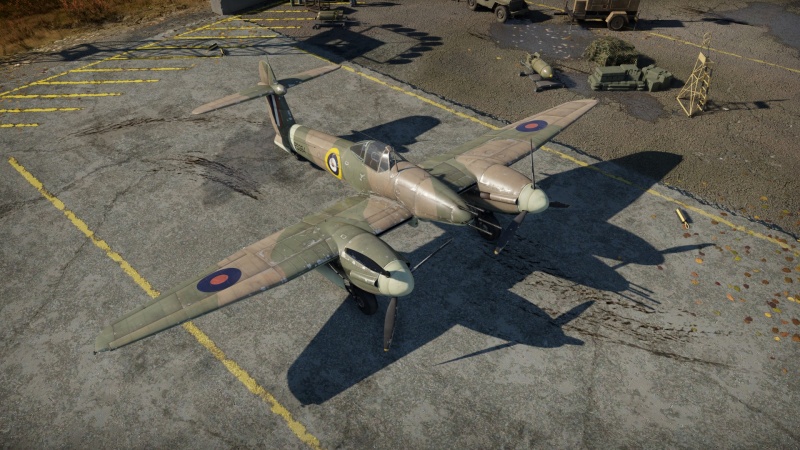 The Whirlwind Mk I is armed with:

The Whirlwind Mk I can be outfitted with the following ordnance:

The Whirlwind Mk I should be used similarly to other heavy fighters. The flight characteristics are very similar to the Whirlwind P.9 with the main difference being significantly less ammo.

The Whirlwind Mk I is very effective in a boom and zoom role due to its good climb rate and powerful armament. However, the relatively low wing break speed in RB does limit you in this role. The Whirlwind Mk I has a good turn rate for a heavy fighter, but will be easily out turned by single-engined fighters. The use of combat flaps will help to balance out this disadvantage. Care must be taken when using the combat flaps, however, as they are prone to snapping off at a relatively low speed.

At this BR you will see many BV 238s and Me 264s. Heading on these bombers will usually guarantee you a kill, but you still need to be careful of the powerful defensive armament of them. The Whirlwind Mk I has relatively little ammunition with only 60 rounds per gun. It is important to be accurate to be successful with this aircraft. To help with accuracy try to get very close to the target before shooting.

The Westland Whirlwind was designed after a specification was issued by the British Air Ministry. The specification called for a cannon-armed day and night fighter. The Air Ministry wanted a top speed of at least 530 km/h at an altitude of 4,600m. Out of five designs offered by the companies. The Air Ministry decided to go with Westland's design for several important reasons. The cannon was mounted on the nose so that the recoil does not affect the accuracy of the gun. There were also no convergence problem as compared to other single-engine fighters with wing mounted guns. The requirements also led to the world's first bubble canopies on a plane. However the decision to arm the Spitfire with cannon and the development of other twin engine fighters such as the Bristol Beaufighter has led Fighter Command to use the Whirlwind less and less as the war progressed. The first batch of Rolls-Royce Peregrine engines were also delayed. It was also found that the engine was severely under-powered and the drum magazines used to feed the cannons were small in capacity. All of this has resulted in the Whirlwind's cancellation and resulted in the plane only equipping two RAF squadrons.

The Shooting Range #81 - Pages of History section at 08:13 discusses the Whirlwind.