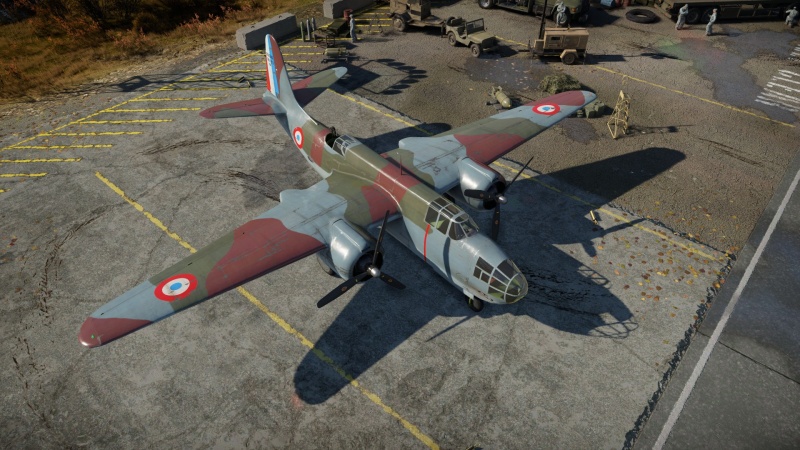 The ▄DB-7 is a premium gift rank II British bomber with a battle rating of 2.3 (AB/RB/SB). It has been in the game since the start of the Open Beta Test prior to Update 1.27. It was a reward for the 2014 War Thunder birthday and was later made available as a battle trophy vehicle in the Warbond shop from April 2018 to August 2018 and from the Battle Pass: Season I, 75th Anniversary of the Great Victory until the end of the Battle Pass: Season IV, "Fearless Voltigeur".

The DB-7 (Great Britain) can be outfitted with the following ordnance:

The DB-7 is a very fast aircraft for its rank, it can outrun most aircraft it faces in level flight. The DB-7 has four 7.5 mm light machine guns in the nose that are fixed and controlled by the pilot. Two additional guns are located in turrets facing the rear, one above and one below the fuselage. The upper turret has better coverage than the lower. Although the defensive armament may seem underwhelming, they are more than capable of dealing with planes of a lower BR. They can still be made to work against higher level planes if AP-T or AP belts are used. As always, one should aim for the pursuer's engine.

The Douglas DB-7 was an American-built light bomber and attack aircraft used by the French, American, Soviet and British Commonwealth air forces during WWII. The French air force was the first air force to order the DB-7 (designated Boston at the time): as a result, the French DB-7s were the first to see service, fighting German units during the Battle of France. The DB-7 would later serve in the air forces of multiple air forces as an attacker, bomber and night fighter.

The original design of the DB-7 (Douglas Bomber 7) featured a pair of 450 hp engines, but after the Spanish Civil war proved that such an aircraft would be highly underpowered, the design was cancelled. However, in 1938, the Douglas Aircraft Company recommenced the development of the aircraft, now powered by a pair of 1100 hp Pratt & Whitney twin wasp engines; this aircraft was faster and carried a larger 2000 lb (900 kg) bomb load. The French immediately took interest to the aircraft and observed the development and testing process; even after a testing crash that killed a French observer, the French buying commission was sufficiently impressed to order 100 aircraft for use with the French Air Force.

The 100 DB-7 Bostons ordered by the French Air Force were delivered beginning from October 1939. The French were responsible for delivering the aircraft to France; as a result, the aircraft were shipped to Casablanca, where they were re-assembled and handed over to French units. By the start of the Battle of France, France possessed 70 of the 100 ordered aircraft, enough to equip three squadrons.

Following the beginning of the Battle of France, the DB-7 squadrons were relocated to France, where they were used against German units, flying ~70 sorties against German ground forces and losing eight aircraft. With the fall of France looming ahead, the aircraft were transferred back to North Africa to avoid capture by German Forces. For a short time, the aircraft were under the control of Vichy France and flew sorties against Allied forces; after the French forces in Africa rejoined the Allies, the aircraft were relegated to second-line duties, being replaced by B-26 Marauders in the frontline attack role. Several aircraft would be relocated to France in the waning days of the war to fight against the Germans, but most of the French DB-7s would see no further combat service.

Note: while this aircraft is in the Great Britain aircraft tree, it is actually a French DB-7 with French markings.

The aircraft's defensive armament consisted of six 7.5 mm Chatellerault MAC 1934 machine guns of French manufacture. Four of these belt-fed machine guns, with 500 rounds each, were located in the nose section on each side of the navigator's glazed cockpit. One machine gun was mounted in the radio operator/gunner's cockpit in the rear upper gun position, and another one in the lower hatch. Both machine guns had 500 rounds each (5 pan magazines with 100 rounds). The DB-7 had an enlarged bomb bay, with its payload increased to an 800 kg capacity.

The American aircraft were designated DB-7B3 (B3 meaning "three-seat bomber") by the French Air Force. In the summer of 1940, DB-7s participated in combat operations in Southern France, where they suffered serious losses assaulting German tank columns without fighter cover. After the French surrender, these aircraft were used in the service of the Vichy French government who collaborated with Nazi Germany. In November 1942 the same aircraft were used to strike the British-American landing forces in Algeria during Operation Torch.