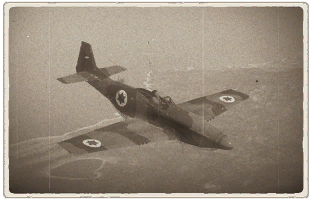 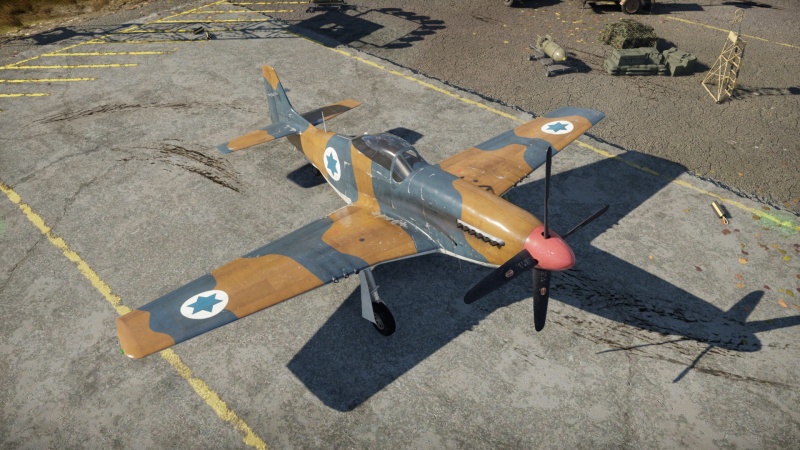 The P-51D-20-NA (Israel) can be outfitted with the following ordnance:

In the summer of 1948, Israeli agents looking to acquire aircraft for the newly founded Israeli Air Forces smuggled four P-51s into Israel to bypass the United States Arms Embargo, in crates labelled "Agricultural Equipment". The first two, No. 190 and 191, arrived in September of 1948, entering Israel's first fighter squadron. They served in Herzliya and Castina (Hazor) during the War of Independence in 1948. The planes dominated the skies, due to its long range that could reach across the entire Middle East, as well as better performance than the aircraft of the Arab side.

The first shootdown by a P-51 was on November 20th, 1948, when an RAF Mosquito was shot down during a mission to collect intelligence on Israel. The first combat was against Egyptian C. 205s on January 5th, 1949. On the last day of fighting, two days later, the two P-51s encountered six Egyptian C. 205s while on an escort mission, and shot three down.

The P-51s were used as the primary fighter of the IAF, performing bomber escorts, ground attacks, and maritime patrol. However, in the early 1950s, the IAF started to arm itself with jets such as the Meteor, Ouragan, and Mystere. During the 1956 Suez Crisis, the P-51 was brought back into action due to the international circumstances. IAF command refused to let the P-51s fly before achieving air superiority, only being active by the end of the war.

Due to the proliferation of jet fighters, as well as advancements made in anti-aircraft weaponry, the P-51 was retired on January 15th, 1961. It served the historical purpose of using multi-role fighters of both ground attack and interception roles to maximize capabilities with a limited fighter arm.