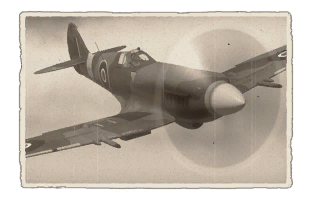 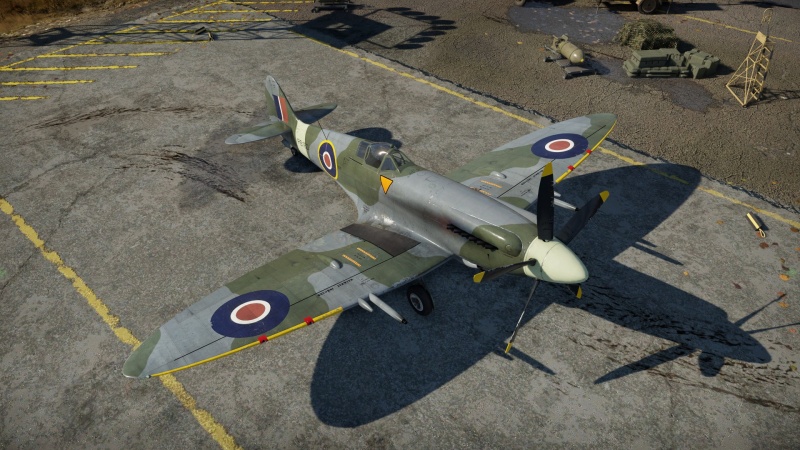 While it does have the older wing and body type of pre-Griffon Spitfires, this aircraft takes the best of both worlds and becomes a monster at its rank. Utilizing the powerful Griffon engine, this plane has amazing acceleration and climb rate, even better than the Merlin variants. This aircraft does not compromise on manoeuvrability as it can still turn on a dime. Beware of the brittle wing construction as taking hard G turns at 600 km/h and beyond can break its wings.

The Spitfire F Mk XIVc is armed with:

The Spitfire F Mk XIVc can be outfitted with the following ordnance:

The Spitfire F Mk.XIVc is the pinnacle of dogfighting at mid to high altitude. Primarily a fighter, this plane excels at catching unsuspecting pilots still climbing to altitude and amazing at the spitfire trademark of dogfighting.

American aircraft can really outdo this plane in speed and energy retention, but cannot dogfight this plane very well. German planes are even more dangerous due to their high top speed and energy retention. This plane can adequately fight Japanese aircraft, but Zeroes can turn faster than you can, though they don't accelerate in a straight line as fast. If you stay up above 4,000 m, you can deal with most Soviet aircraft effectively.

Booming and zooming and pure energy fights are this plane's weaknesses, it does not hold up well in drawn-out fights of speed.