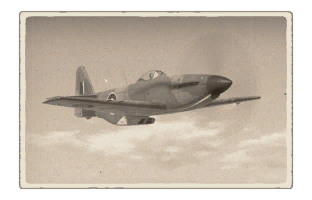 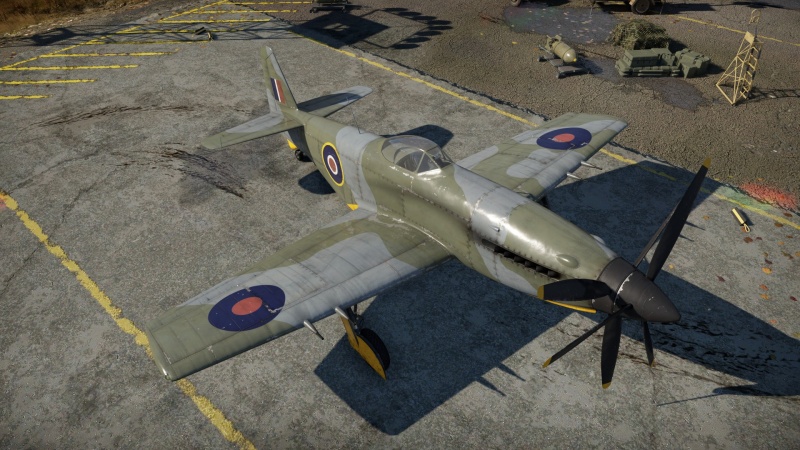 The MB.5 is a premium rank IV British fighter with a battle rating of 5.0 (AB/RB) and 4.7 (SB). It was introduced as a premium pack in Update 1.77 "Advancing Storm". It was removed from the store after the 2019 Victory Day Sale, but was reintroduced briefly for the 2018 "Royal Air Force Centenary" and purchasable in-game with Golden Eagles

The MB.5 is an unusual plane by the standards of British aircraft. It seems like it should be an American aircraft due to its shape, but yet it is not. In fact, it behaves almost as your average P-51D Mustang would- it even looks like a Mustang, only with the nose of a Spitfire. What sets it apart from most Rank IV planes is the presence of a contra-rotating propeller, which is also found on the Wyvern S4. The MB.5 is different than the Mustang in the armament it carries- four 20 mm Hispano Mk.II cannons rather than six .50 cals. The MB.5 has a high climb rate, as is expected of most British planes, which is nice for competing with same-tier German and Soviet fighters. In short, the MB.5 is a sort of symbiosis of a Spitfire and a Mustang, which can be a match-deciding plane in the right hands. Though the turn rate is generally below average, at high speeds the MB.5 can conduct shockingly quick turns to catch even dogfighters by surprise. The huge power of the engine also allows for lower speed bleed in vertical manoeuvres.

Despite being a combination of the Spitfire and the Mustang, the MB.5 is not a great dogfighter. Although it can turn sharply at high speed (especially with Immelmann turns), due to its short wingspan, it will bleed a lot of energy away.

Therefore, the player should strictly stick to Boom-and-Zoom tactics as the MB.5 has a high climb rate, high thrust power, and very high dive speed.

It is important to note that the MB.5 does not get an aerial spawn as your true interceptor does, so it is vital that you side-climb until you reach 18,044 feet (5,500 meters) to effectively intercept most enemy heavy bombers. Once you have reached altitude, keep your speed and energy up while continuing to slowly climb in search of targets. When you have found a target, always be sure you have the altitude advantage, otherwise, you risk losing your best asset- speed. Important - Before you begin your attack, be sure you have angled your attack run properly before attacking a bomber to present the smallest possible window for the enemy gunners. Once you have set up you run correctly, make a quick pass and fire a moderate-sized burst, then pull away immediately. Be sure that you are certain you are out of range of the enemy gunner's, otherwise you risk becoming a flying fireball.

Just about every German aircraft at battle rating 5.0 and up will have the most dangerous ammunition in the game- the Minengeschoß, or "mine shell." The round is designed with thinner shell casing, allowing the shell to carry bigger explosive load per shell. The most common enemy you will be facing is the Bf-109 G series. The 109 G is an excellent energy fighter and can mount external gun pods. The adversary that will give you the most problems is the Focke-Wulf Ta-152, which has heavy armament to punish any plane in its path. Another adversary to take into account is the Messerschmitt Me-410 B-6/R-3, which can rip through any opposing aircraft.

Any aircraft bearing the prefix "Yak" is an aircraft not to be taken lightly, as their nose-mounted weaponry and high manoeuvrability will give you a run for your money. The most dangerous adversary you will face here is the La-7B-20, which consists of three nose-mounted cannons. In addition, the La-7B has extremely good energy retention and the "Ground Target" ammunition for the cannons are notorious for tearing apart enemy aircraft. In addition, the most underestimated opponents on the Soviet side are the IL-10 and the Su-6, which have murderous primary armaments. Under no circumstances are you to engage these attackers head-on.

While you are better than most American aircraft in respect to climbing, some American aircraft are feared universally in War Thunder and deserve special note. The P-38L-5-LO Lightning will be one of the most dangerous opponents that are less common. The nose-mounted .50 cals and 20 mm cannon act like a buzz saw that tears apart anyone foolish enough to head-on or expose themselves to this plane. In addition, the P-38L has a better climb rate and has a phenomenal roll rate that will dance around you. The P-38K Lightning has some of the same aspects, only the P-38K is faster. The other heavy fighter that will give you a run for your money is the F-82E Twin Mustang, which not only has a better roll-speed that the Lightning, but it can mount the gun-pod that carries 8 additional .50 caliber machine guns, which make this plane the most dangerous in any head-on engagement. Another plane to take into consideration is the P-51D Mustang, which is an excellent BnZ fighter that carries the feared M20 API-T Tracer rounds that turn it into a flamethrower. The P-47N Thunderbolt has the same principle, only it gets the "Interceptor" spawn and carries 8 .50 cals, making it the deadliest opponent on this list. Another American aircraft to take into consideration is the A-26B-50 Invader, which has 14 x .50 cals, and two turrets, each with two .50 cals. The A-26B-50 is also frighteningly fast for its type and will give even fighters a run for their money. Avoid any frontal engagement with this attacker and do not tail it. The AD-2 and AD-4 Skyraiders are also surprisingly manoeuvrable for their type. While it is unlikely, you do have the possibility of facing the F8F-1 Bearcat, which boasts amazing manoeuvrability.

Italy has among the most manoeuvrable aircraft, more manoeuvrable than most German planes. However, the Italians fighters from rank II and up to rank IV feature the German MG 151 20 mm cannons, which utilise the very effective Minengeschoß rounds. One of the two most plausible adversaries you will face will be G.56, which has good energy retention and powerful armament. The other is the Bf-109 G-14/AS, which can mount MK 108 30 mm cannons in external gun pods. The additional firepower will tear the MB.5 apart, due to the MK 108s getting access to the Minengeschoß rounds. It is important to note that both of these planes have a significantly better climb rate than the MB.5, so take care when facing the Italians.

By the early 1940s, Martin-Baker's powerful MB-3 prototype —the M.B.5's predecessor— took to the skies for the first time. It achieved good speed (668 km/h) and aerial agility while carrying an unprecedented primary armament of six 20 mm cannons.