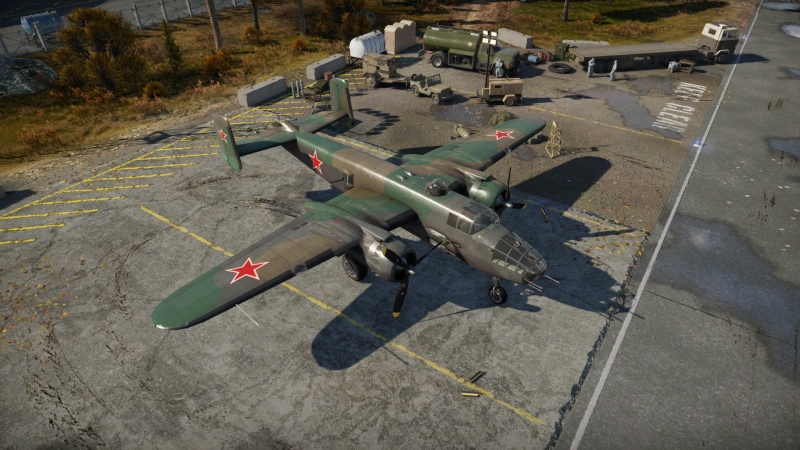 The B-25J-30 is a lend-lease vehicle for the Soviets and is essentially identical in-game to the USAAF B-25J-20. The minor differences are the reinforced steel pilot seats and extra armour for the dorsal gunner.

New armored pilot seats appeared in the B-25J-25 series. Also, the wing leading edge was reinforced. Beginning with machine No. 44-30111, additional armor was fitted to the upper fuselage to prevent the turret-mounted machine guns from inadvertently hitting the bomber.

From aircraft No. 44-30309 on, the Americans provided for the mounting of chemical spray tanks, similar to the Soviet VAPs, on external bomb racks.

A total of 4,318 B-25J aircraft were delivered. 72 more bombers were practically ready when their production was discontinued. Some of those machines were nevertheless completed later. 800 B-25Js of the total number were assembled directly as the ground-attack aircraft version. In addition, North American produced so-called conversion kits, which allowed the aircraft to be quickly converted on a front-line airfield. Thus, the real number of machines flying as the ground-attack aircraft version significantly exceeded the original eight hundred.