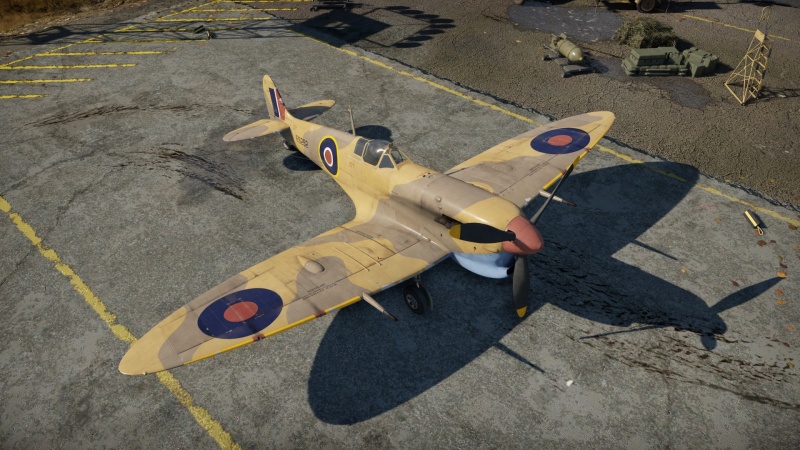 The Spitfire Mk Vb/trop is a rank III British fighter with a battle rating of 3.7 (AB/RB) and 3.3 (SB). It has been in the game since the start of the Open Beta Test prior to Update 1.27.

Having picked up experience from the previous Mk Ia, IIa and IIb, most players will welcome the Spitfire Mk Vb. The Vb sports a new and more powerful Merlin-45 inline compared to the previous Merlin-XII engine giving it an extra 100 horsepower when upgraded, which provides better high altitude performance and faster top speed than the IIb. Unfortunately, the Vb still has similar problems as experienced with the early Spitfires such as a very weak airframe, weak wings, bad roll rate at high speeds and lack of combat flaps to help with dog-fighting. Experienced Spitfire Mk Vb pilots use close convergence ranges. Generally, the best convergence range for a Spitfire is 300 m, with 20 minutes of fuel. Once you arrive on the battlefield you should generally have between 12-15 minutes of fuel. The Spitfire manoeuvres best with this load of fuel. The Spitfire fights best at close-range. The basic strategy that many Spitfire pilots use is a tactic whereby they bait head-ons from enemy aircraft, before evading and turning around to put shots into the target at close range while the enemy is pulling out. When the Spitfire has the initiative in the engagement and has successfully manoeuvred onto a six-o-clock aspect, it is nearly impossible for the opponent to regain the advantage. Using clever management of the throttle and manoeuvres to gain or bleed energy, an experienced pilot can maintain the initiative in the engagement and stay on an opponent's six o'clock.

All Spitfires have similar research paths, where the first upgrade that should be researched is "Radiator" or cannon belts, and then "New 20 mm cannons" or "Airframe". The Spitfire Vb does not need the "Radiator" upgrade due to the good thermodynamics of the new engine, so pilots should research the "Offensive 20 mm" belts first, and then "New 20 mm cannons". Pilots should leave Mk.II mod 1942 & 1943 until last, and instead prioritise performance first. Research "Airframe" to make the plane a bit lighter so it turns faster, and then research "Engine", "Wings repair" and finally "Engine injection". Once you have received "Engine injection", go back and research "Radiator", and then finally research "Cover", then 1942 cannons, then "Fuselage repair" and finally 1943 cannons.

The Spitfire Mk Vb/trop is armed with:

The 7.7 mm machine guns seem ridiculous to have at this rank. At this BR, you need to keep either one long burst or a series of shorter bursts on a target to cause enough damage for it to fall and hit it many times (50-100 bullets need to hit critical modules such as wing spars) to secure a kill unless you are lucky and manage to set fire to a fuel tank, mangle the engine, or kill the pilot of the enemy. Going by sheer damage and fire chance, the best belt is the Tracer belt. The incendiary tracer and armour-piercing incendiary bullets are able to crit pilots, shatter wing spars and spark fires in fuel tanks with ease. Coincidentally, the belt is also good for "walking" in the 20 mm guns onto the target.

The Hispano Mk.II has the third-most damaging World War II HEFI round in the game, with an explosive power coming in behind the MG 151/20 and the AN/M2. The best belt is the stealth belt, as it contains 75% useful rounds (HEF-I, HEF-I, AP) and 25% selective-use rounds (HEF-SAPI). Since the tracer rounds are just ball-point ammunition with a tracer element, and you only have 60 rounds per belt, you should load the stealth belt and aim with the 7.7 mm machine guns in the method described in the "Using The guns" section.

The Spitfire Mk Vb/trop fills the role of an angles-fighting aerial superiority fighter in the early British tier III lineup. It cannot fulfil any ground attack duties due to its low cannon ammunition pool and the absence of any heavy machine guns which can penetrate a tank's thin roof armour. In addition, the aircraft cannot carry any bombs or other air-to-ground ordnance. Like most Spitfires, the Spitfire Mk Vb/trop is meant to be used as a pure aerial superiority fighter, while fighter-bomber duties are relegated to other aircraft, such as the Beaufighter series of aircraft. Further details on the aircraft are as follows: 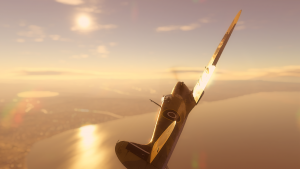 Spitfire Mk Vb/trop turning into the sun over Sicily.

The Spitfire Mk Vb/trop is a well-rounded fighter that can turn excellently. When the plane has not been fully upgraded, the Spitfire Mk Vb/trop's Merlin-45 engine has less power than the Merlin-XII engine of the Spitfire Mk IIb. However, once all engine upgrades have been acquired the Merlin-45 is easily a superior engine with better cooling and power, blessing this variant of the Spitfire with better energy retention and better cooling than the Mk I and II Spitfires. The Spitfire Mk Vb/trop has outstanding energy retention and easily gains speed in a dive and retains it after pulling out into more level flight. In addition, it does not lose speed too quickly in a turn and thanks to outstanding acceleration from the Merlin-45, the aircraft easily accelerates after pulling a high-G turn that initially bled a large amount of speed. However, the newer, more powerful, heavier engine and airframe only has more energy retention capability due to being heavier than the Spitfire Mk IIb. This means that the aircraft cannot turn as tightly or as fast as its predecessor. The extra weight comes from the new cannons, which are slightly longer than the older Hispano Mk.Is, and the extra weight of the more powerful Merlin-45 engine. 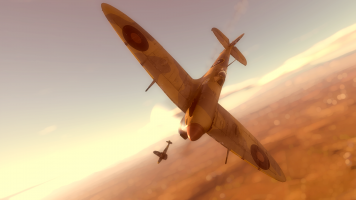 A Spitfire Mk Vb/trop breaking out of its attack run after a successful kill. Note the large Vokes Sand filter on the bottom of the engine, which is a distinctive feature of this plane.

The Spitfire Mk Vb/trop has a quoted rate of climb of 17.8 m/s at around 255 km/h in a moderate climb, however, when factoring in 20 minutes of fuel reduces is capability and it can manage around 22.7 m/s in a climb at 251 km/h IAS, or around 20.6 m/s in a climb at 270 km/h IAS. In addition, by alternating between shallow and sharp climbs, one can make the Spitfire climb much faster in the initial stages of the match. Through practising these techniques, it is possible to achieve an end result of an average of around 20-21 m/s in a single, steady climb to 4,000 m. The aircraft's nose was kept pointing between 15 - 20 degrees during this climb.

Experienced Spitfire Mk Vb pilots use close convergence ranges. Generally, the best convergence range for a Spitfire is 300 m, with 20 minutes of fuel. Once you arrive on the battlefield you should generally have between 12-15 minutes of fuel. The Spitfire manoeuvres best with this load of fuel. The Spitfire fights best at close-range. The basic strategy that many Spitfire pilots use is a tactic whereby they bait head-ons from enemy aircraft, before evading, and turning around to put shots into the target at close range while the enemy is pulling out. When the Spitfire has the initiative in the engagement and has successfully manoeuvred onto a six-o-clock aspect, it is nearly impossible to regain the advantage. Using clever management of the throttle and manoeuvres to gain or bleed energy, an experienced pilot can maintain the initiative in the engagement and stay on an opponent's six o'clock.

This Spitfire has a good turn time compared to its opposition and cannot be out-turned by anything save for a Japanese Zero. However, its 16.8 second turn time and slightly wider turn radius are a far cry from the Spitfire Mk Ia's outstanding turn radius and turn time. Don't expect to out-turn everything. While you have good energy retention, you have low manoeuvrability below 280 km/h, and the plane has a tendency to lock up above 450 km/h. A prime tactic used by enemy pilots is entering a steep dive, and then cutting speed near the ground, resulting in you ramming into terrain. Don't let that happen. If the target's too slow, then pull out into a quarter-loop, before rolling 180 degrees and inverting. They'll have lost a lot of speed by cutting the throttle and nearly nothing rivals the acceleration of a Spitfire Mk Vb/trop under 4,000 m save for high-performance Soviet aircraft and the Fw 190s.

The Spitfire Mk Vb/trop begins to lose its edge below 280 km/h IAS. It begins to slow down, become sluggish, and starts to show its weaknesses. Although it has good energy retention, it will lose a lot of speed turning above 400 km/h and loses speed slowly but steadily in a turn below that speed. Beginning at 270 km/h IAS, the aircraft begins to lose speed and agility until it becomes heavy and unwieldy beginning at 250 km/h. A favourite tactic of Fw 190 A-1 pilots to use against Spitfire Mk Vb/trops is to keep the Spitfire turning until it loses speed, or to utilize their outstanding agility and acceleration to turn the fight into a vertical manoeuvring fight that moves upwards. They utilize a series of loops & Chandelles to force the Spitfire to lose energy, bait it into a turnfight and then attempt to use their superior acceleration and energy retention to force the Spitfire to lose speed and either crash or become a sitting duck. Spitfire pilots are advised not to engage in an extended turn-fight with an Fw 190 A. Should you be able to gain the initiative on an Fw 190 by diving on him from a higher altitude, then you will have the upper hand and defeat him easily.

Use the cannons sparingly. Use the cannons when in the aircraft's most effective convergence range and envelope, and use the machine guns to 'sight' the cannons. Fire the machine guns' tracer belts for maximum AP-I and tracer ammo, using the similar muzzle velocities to get an idea of where the cannon rounds will go, and then fire cannons once you are getting consistent hits. If your cannon ammo drops to 20 rounds or below, try and return to base quickly. That way, if you get bounced on the way back, you can at least have some cannon ammo left to surprise any raider looking to kill you. Generally, the stealth belt works best, as it contains a high percentage of HEF-I rounds (50%), especially seeing as you don't have the ammo capacity to use belts with functionally useless ammunition such as the tracer and ball-point rounds, which do nearly nothing.

Go for deflection shots against enemy aircraft. These shots are side-on shots where you "lead" an enemy aircraft in front of you, and get off a burst when you're not directly behind them, but instead when they're turning. While this may be difficult for newer players, it provides valuable training and is a good learning experience for later tiers. In addition, should you use this technique, you can easily cause enemy planes' wings to completely fall off if you pull it off right and hit a wing spar. Bf 109s, with their single-wing spars, are especially vulnerable to a well-aimed side-on shot.

An example of an attack made using the machine guns to "aim" the cannons. This attack was done with a Spitfire Mk IIb, but it should be actively used in any Spitfire with .303s coupled with cannons (Spitfires IIb through LF Mk IXc)

On takeoff, switch on manual engine control. Set the prop pitch to 100% immediately, and the radiator to 100%. 120% mixture may be used below 1,000 m, but above that altitude, use 60-78% mixture for optimal performance. Should you be looking to conserve fuel, a good cruising engine setup is 90% throttle with 40% mixture.