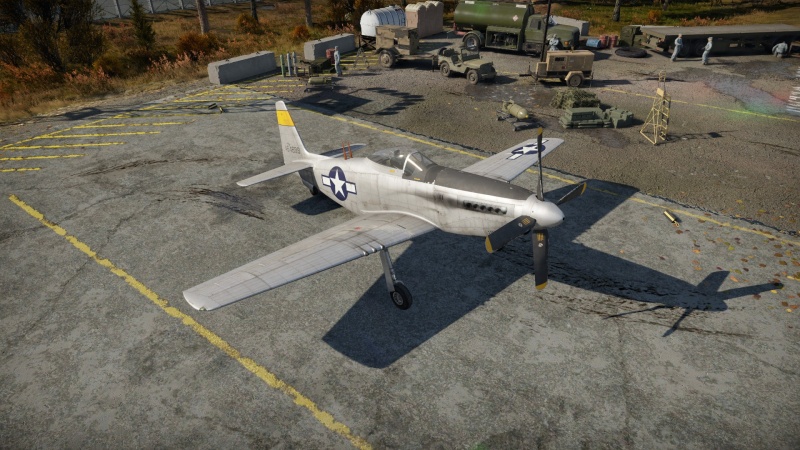 The P-51H-5-NA is the last propeller plane in the USAAF fighter line. While retaining all features the earlier versions may offer, its powerplant is upgraded.

The P-51H-5-NA handles much better than its predecessors. It has a noticeably improved rate of climb that is one of the best in the game when it comes to propeller-driven aircraft. It is also an extremely fast aircraft and can outrun and outclimb almost all opponents in most situations. Its turn rate isn't as good as some other aircraft at its rank so don't get into long turning battles that take up large amounts of energy. However, it can turn well at higher speeds, but doing so is more risky considering that other aircraft can dogfight better by turning at lower speeds at a greater rate. The best way to use the advantages of the aircraft's speed and climb-rate is to use boom and zoom tactics. Handling and speed are diminished when bombs are loaded, which is the same for all aircraft. The key to winning in this aircraft is to stay fast, stay high, and pick your battles. It can be an extremely deadly aircraft if flown by an experienced pilot.

The P-51H-5-NA can be outfitted with the following ordnance:

The P-51H-5-NA is a high altitude turn fighter. It has impressive performance against most props it may face and it can put a considerable fight against earlier jets. Compared to its German and British counterparts, it outperforms them by a fair amount in engine performance. The P-51H-5-NA can also be used as a strike fighter, as it can have great loadouts of combinations of bombs and rockets for this purpose.

Whilst having great engine performance, the P-51H-5-NA can turn impressively as well, out-manoeuvring most of its German counterparts. It has good ordnance, capable of shooting any aircraft down with relative ease, as well as being able to dodge incoming attacks by jets. It has a good climb rate which also gives it an option to put up a fight against jet encounters, being able to perform boom and zoom attacks as its energy retention is good. It has a tendency to break its wings while zoom climbing at speeds higher than 550km/h. It also uses high octane fuel, which means it has considerable susceptibility to fire.

At low altitude, fighting with a turn fighter mindset will mostly work. If jets are present, try not to drop your speeds too much, as you may need to dodge multiple shots. The P-51H-5-NA will not perform as good against jets, as it does not have comparable speeds. Boom and Zoom attacks are the most effective against jets, as this manoeuvre mostly removes the speed out of the equation.

Most enemies faced by the P-51H-5-NA will be easily taken down, but unfortunately it also faces jets from time to time. Me 262 and Ho 229 are the biggest predators of this plane. The Ho 229 will out-turn you while the Me 262 will outrun you.

Since the P-51H-5-NA has a good engine and fast climb rate, you should be higher than ALL the enemies since it's going to be hard for allied planes to turn fight with both German and Japanese planes. This is one of the main advantages of American planes: powerful engines, to out-climb and out-speed most of their German counters, because most of the time, even a 1v1 turn-fight with a Bf 109 and Fw 190 will result of you being defeated assuming the pilot knows how to fly, in order to avoid this, Boom and Zoom is the best way to get a kill with a P-51H-5-NA.

The US Army approved a contract with North American Aviation to design and build a lightweight P-51 Mustang in July of 1943. The project was designated as the NA-105, and the contract specified five functioning prototypes for testing.

North American's chief of design, Edgar Schmued, visited the Supermarine and Rolls-Royce factories in England in February 1943. There, he sought to discover how the Supermarine Spitfire was so much lighter than the Mustang, and also to choose a version of the Rolls-Royce Merlin engine to be used in the lightweight Mustang. At the Supermarine factory, they did not have the data he was looking for so they simply weighed all the parts needed to build a Spitfire. It turned out that the British had lower design standards for the Landing gear, angle of attack and side engine design loads. At the Rolls-Royce factory, Schmued discovered the RM.14.SM - a new variant of the Merlin that improved the horsepower to 2,200. The RM.14.SM was not significantly heavier than the earlier engines, so Schmued chose it for the lightweight Mustang design.

Upon returning to the United States, Schmued initiated the design process for the lightweight Mustang. The engineers attempted to reduce the weight on every part they could, and the result was an aircraft 600 pounds lighter than the earlier Mustangs. There were several prototypes, designated as the XP-51F, XP-51G, and XP-51J, which were thoroughly tested. The production model (NA-126) was designated as the P-51H, and it most closely resembled the XP-51F. 1,000 P-51H Mustangs were ordered on 30 June 1944.

Despite being originally based on the earlier P-51Ds, the P-51H shared little in common with the earlier models. In fact, almost no parts used on the P-51H were compatible with the P-51D. It differed visually in having smaller landing gear, there was no leading edge kink in the wing, the airframe was longer but thinner, and the belly air scoop was square like on the early Mustang variants. Additionally, the chin scoop for the engine was smaller than on previous versions.

The wheels had new disc brakes, the oil cooler was moved from the belly scoop to in front of the oil tank, and the oil used a heat exchanger for cooling. The production version of the P-51H did not end up using the RM.14.SM engine, but instead the Rolls-Royce Merlin V-1650-9 was used. The -9 gave less takeoff power than the V-1650-7, but with a water/alcohol mixture injection the wartime emergency power could be upped to 2,000 hp at 10,200 feet. The P-51H was the last major production variant of the P-51 Mustang, and it was also the fastest; it could go 487 mph at 25,000 feet.

The propeller used was the Aeroproducts 11' 1" 4-blade Unimatic, which was much lighter than the propeller used on the P-51D despite having wider blades. The fuel amount in the fuselage tank was increased to 55 gallons. The fuselage skin was made to be thinner than on the earlier Mustangs, but also was made from a lighter alloy. The cockpit was redesigned with simpler controls, the canopy was redesigned and moved forward, and the pilot sat higher up in order to better use the gunsight.

The armament of six .50 cal machine guns remained unchanged, but the ammunition stowage was modified. Removable ammunition boxes were added, and new ammo doors were included as well. This sped up the re-arming process and also helped to improve the laminar flow of the wing, which had been impeded by the earlier ammunition door design.

By VJ Day, 370 P-51H Mustangs had been delivered, and production ended in November 1945 with a total of 555 P-51Hs produced. Despite having ordered more P-51s, only the 555 were completed because of the end of World War 2; all P-51H Mustangs were built at the Inglewood plant in California.

Despite a large number of P-51H Mustangs being delivered before the end of the war, no P-51Hs saw combat in World War 2. During the Korean War, the P-51D was chosen for combat instead of the P-51H, despite having less performance. This was because there was a larger amount of P-51D Mustangs available. The P-51H was used heavily by the Air National Guard units after that period of time, and the last Mustang (a P-51D) was retired in 1957.