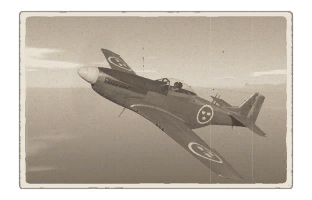 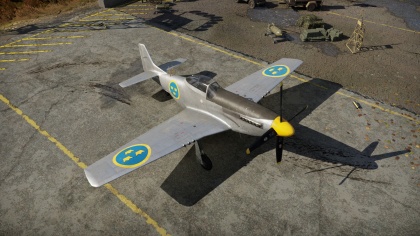 The J26 is a very fast and quite agile plane, it is one of the fastest fighters at its Battle Rating. Thanks to the higher engine settings and the use of the 150 octane fuel, it can easily reach 610 km/h at the sea level and 710 km/h at the optimal altitude. By average it is 20 km/h faster than the D-5 and, just like that variant, it has a really high dive speed limit. The climb rate, while not being as good as in the German interceptors, is quite good compared to previous planes from the American tech tree, climbing from the sea level to 5000 m altitude in over 4 minutes. Acceleration in a level flight is quite decent, it is comparable to the P-38 series and better than in any P-47. The addition of the dorsal fin makes the P-51D-10 more stable in yaw axis compared to the previous variant. Turn rate of both those planes is still almost the same. At low speed it is quite bad, but as soon as the plane gets faster it also starts to turn tighter, even at a really high speed near the maximum allowed speed.

The stall characteristics in the Mustang depends a lot on its fuel load, it is really hard to stall out while turning at the lowest one and is able to fly at almost full elevator deflection. On the other hand, it stalls quite fast with full fuel tanks, also it gets less stable after loading it with more than 30 minutes of fuel. The plane reaches its critical angle of attack near the half of elevator deflection below 500 km/h. The J26 stalling speed is very similar to those of the P-47 or P-63 series, and so has a high stall speed compared to other planes it can meet. Therefore, the J26 pilot should do their best to not fly at a low speed in order to stay above stall speed and also to make the most of the plane's performances in the skies.

The J26 is the breakout fighter from the original P-51 design with some major changes which include the beefier Packard V-1650-7 inline engine, bubble canopy for increased pilot visibility and replacement of four 20 mm cannons for six 12.7 mm M2 Browning machine guns. While not the refined thoroughbred compared to Mustangs of later in the War, the D-5 comes into its own as a multi-purpose fighter depending on the theatre of operation and mission requirements.

For the D-5 Mustang to work properly as a fighter/interceptor, it needs to maintain its speed to catch enemy aircraft off-guard or to get away when the odds start to look grim. Immediately after spawning, this aircraft should begin its climb to higher altitudes where it can then capitalize on its potential energy, however, side-climbing is recommended otherwise the Mustang will end up in the middle of two layers, lower and slower aircraft which don’t climb well and those like the Spitfire, J2M or Bf 109s which will easily out-climb the J26. Side climbing affords the calculating pilot the opportunity to reach a good altitude from which targets can then be selected and taken out. Here, options will include bomber hunting and Boom & Zooming. Keeping the aircraft’s airspeed around 400 km/h (248 mph) will allow the pilot to play more on the offensive than running on the defensive.

The J26 is agile enough to dogfight around larger fighters, attackers and bombers, however, it does lack when going against other single-engine fighters around its rank. To counter this inherent weakness, the Mustang should maintain its speed and concentrate on utilising Boom & Zoom tactics allowing it to flee the scene and set up for another attack on its terms. Even missing the target (or not fully destroying it) should not tempt the pilot to chase it down to finish it as this will ultimately bleed of crucial energy and even though successful in chasing down the enemy aircraft and finishing it off, the J26 is left in a vulnerably slow position where it then has to scrape back up to altitude as a potential easy pickings for any patrolling enemy aircraft.

While this version of the Mustang is not outfitted with 20 mm cannons, having six 12.7 Akan m/45 heavy machine guns can still result in devastating damage inflicted on the enemy. There are several options of ammunition which can be outfitted with this aircraft and they all have their purpose, however, utilising the "Tracer" belt can be truly effective. The tracer belt is composed entirely of the extremely effective M20 API-T rounds which when concentrated on a bombers engine or fuel tank can produce some spectacular shows of colour as flames erupt out of the defending aircraft. One thing the pilot must keep track of is the amount of ammunition left after firing because two of the six guns have more ammunition than the other four; at one point damage output will decrease, however, the decrease in weight from the firing of the rounds will increase the aircraft’s performance until the reload timer resupplies the aircraft or the pilot returns to base for a reload. Alternatively, for an even more effective method of downing enemy aircraft, use the "Stealth" belt.

The J26 has many strengths and weaknesses compared to other aircraft in which it will face, the key is to know these limitations and to know which ones you can push and be successful and others which will leave you an easy enemy target. The key point to remember is speed is key, staying around 400 km/h (248 mph) will keep many options open to either run or attack and can be the deciding factor when facing an aircraft with superior qualities and still come out the victor and be credited with the title “rank does not matter.”