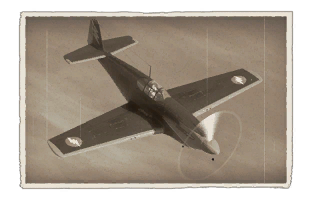 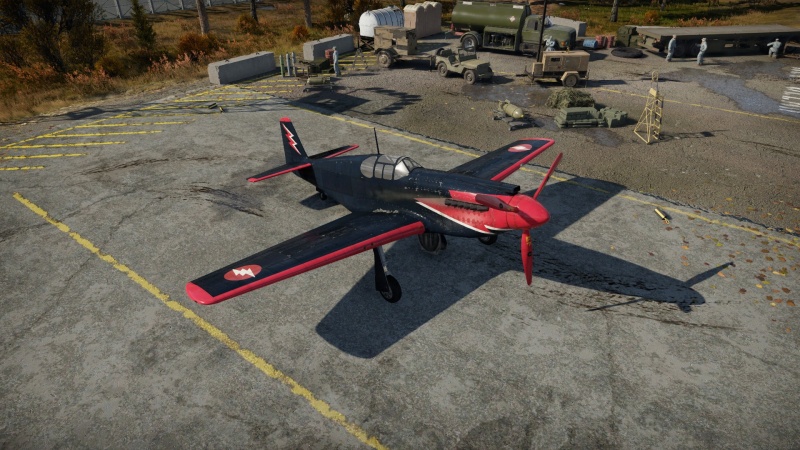 The P-51A Mustang is a premium gift rank II American fighter with a battle rating of 3.0 (AB/RB/SB). It was a special vehicle offered during the 2015 Thunder League as a reward for completing five Air challenges. The P-51A comes with a high-powered engine and with four 12.7 mm Browning machine guns.

A faster, but lesser armed successor to the P-51, best used as air-superiority fighter utilizing BnZ tactics. The A-36 is the up-gunned attacker variant featuring ground ordnance.

"The Need for Speed" is a worthy credo for all Mustangs. This initial iteration boasts a significant speed advantage over all Rank II aircraft, but sacrifices are obvious. On the upside, the good maximum velocity greatly benefits the energy retention coming out of dives and for staying out of trouble.

This version features the Allison V-1710-81 Engine with improved performance at altitude at a small cost to horsepower output on the ground. However it is also, by a small margin, the lightest variant and more aerodynamic, off-setting this loss.

In terms of weapons, there aren't many to speak of. Nearly all US fighters from this point on feature at least six M2 Brownings. Thus the burst mass is quite light. A detriment for quick attack passes. Use the tracer belt or the omnipurpose belts, as they contain the most incendiary bullets. For Realistic and Simulator battles the ammo count is quite miniscule, controlled bursts are in order.

The start of each battle can be quite similar, thus in general proceed as follows: WEP and climb until you are higher than most enemy aircraft. Then proceed to destroy fighters. Do NOT turn fight with any aircraft except for bombers, though the latter is an ill-advised target with the lack of heavy firepower. If someone is on your tail, proceed in a shallow dive. The plane's exceptional top speed should allow it to outrun almost everything. Note that while this Mustang variant features improved high altitude ability, it is still not comparable to true altitude fighters like the MiG-3.

In Arcade Battles the option for in-air reloads may tempt the pilot to spray & pray and dump all the ammunition. However, a more deliberate and aimed approach is often more succesful. Waiting outside a furball or dogfight for the right moment to intercept is key. Due to the lack of climb rate and firepower bombers should not be sought out. In general the P-51 plays akin to the He-100.

In Realistic Battles the combat role is a tricky game. Lacking climb rate and good high altitude performance the Mustang pilot needs to wait for the combat to come down to about 4,000 m (13,000 ft). Climbing should be done away from the expected combat zone (a.k.a. side-climbing) . At this point initial combat should be Boom & Run, utilizing the superior top speed to avoid combat while the enemy is focused on other team mates. Once the hostiles have dropped to a lower altitude Boom & Zooming can be engaged in. With only four HMGs and 1260 rounds, ammo can run sparse after three kills. Keep to 30 min of fuel minimum and returning to base will be a rare occurrence. Overall this is a support fighter, as in the current climbing meta engagements against higher flying interceptor-fighters are often deadly, as the Mustang then lacks the critical ability to choose the time of engagement.

Simulator Battles is where the P-51A truly shines. Flying at top speed with military rated power (100%) keeps the engine cool and enemies usually far away at one's tail. Most of all combat happens slightly below the Mustang's preferred altitude and the cockpit view is great, albeit with limited rearward view. Only the lack of acceleration in prolonged dogfights is a trap that even experienced pilots still fall into. An emergency dive to top speed will however fix this, if the pilot remembered to keep some altitude. And one should, for the greatest advantage is the ability to disengage any unfavourable battle and like with many things, the early Mustangs do not disappoint.

Unlike the A-36 Apache variant of the Mustang, the P-51A was designed purely as a fighter rather than as a ground attack aircraft. As such, no dive brakes were fitted. Two under-wing pylons were mounted with the capability of carrying bombs or drop tanks. The maximum weight of the P-51A was an increased 10,600 lbs, while the average load was 8,600 lbs.

The P-51A first flew in February 1943, with deliveries beginning in March of the same year. They were delivered with olive drab paint on the upper portions and grey paint on the underside.

The P-51A was used heavily in the China/Burma/India theater (CBI), seeing service until 1945 - long after improved variants had entered service.