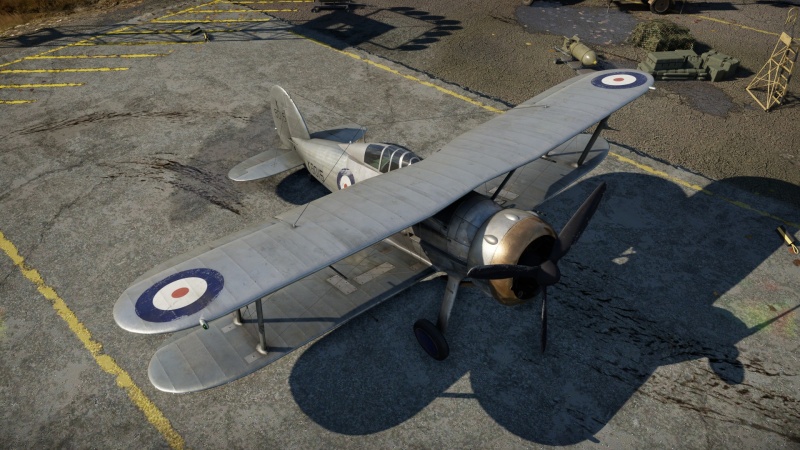 Tuck's Gladiator Mk II performs identically to the regular Gladiator Mk II. This means it has good speed an acceleration for a biplane, and like most other biplanes is far better at turning than the monoplanes it faces; it is also one of a limited number of biplanes with flaps, which are hard to break off and can be used to further improve turning performance.

The Gladiator is extremely weak and vulnerable to enemy fire. It does not sport any armour protection, and thus the critical components (engine, pilot, fuel tanks, etc) are unprotected, even from low-calibre machine guns

Try to avoid enemy monoplanes if you are at an altitude disadvantage since you will bleed a lot of speed in combat. Instead, begin climbing up to 2,000 - 3,500 m and only attempt to assault enemy aircraft when they are flying below you and are alone. Another reason to fly high is the engine temperature. When diving, turn your engine off ('I' key by default) which will not only prevent the engine over-revving, but also cool your engine rapidly and fly silently, making the enemy unaware of your presence.

Do 17 Z-2 This early twin engine plane always shows up as an AI controlled recon aircraft that you have to down, which is a good news as AI won't manoeuvre aggressively. However this plane is extremely durable for the Gladiator's weak MGs. When it shows up as an AI, deflection shots are not recommended as the small shooting windows really does nothing. Instead, try disabling its 2 gunners first, then just sit behind it and burst on its wings and engines. When attacking the gunners try to not get your engine damaged by pulling evasive manoeuvres as soon as the bullets come close, since the Do 17 might outrun the Gladiator in a level flight if your engine is damaged.