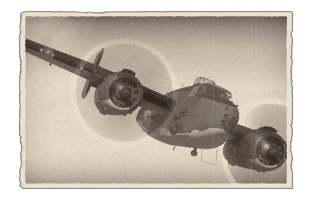 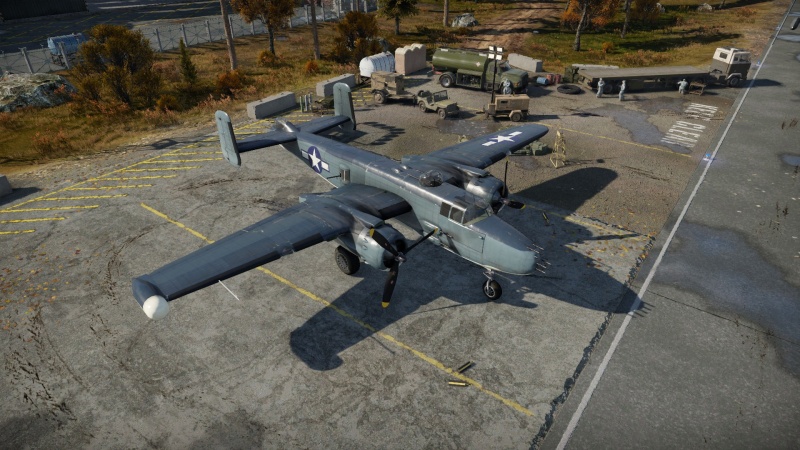 The PBJ-1J is a rank III American strike aircraft with a battle rating of 4.0 (AB/RB/SB). It was introduced in Update 1.41.

Rugged, sturdy, though, the PBJ-1J is all of those things. Featuring crew armour protection that outclasses the B-17 Flying Fortress in a handier, smaller design, the PBJ-1 is a though nut to crack and even harder to devoid of crew. Calibres above 20 mm are a must for a quick kill, otherwise the PBJ-1J will repay in kind. For going all defence is good, but all offence, too? It is called overkill, of the pursuit fighter.

The two Wright R-2600 air-cooled radial engines are themself hard to destroy and with dropped payload the PBJ will just keep flying on a single damaged one. Denying underarmed fighters the ability to lethally cripple it. Yet this aurcraft has got one downside: Fuel tanks. While present in all planes, the armour, crew and bomb bay take up all the fuselage. Leaving only space in the wings. A common cause of crash is hence a fire and thus a structural failure of the wingspar.

The PBJ-1J is armed with:

The PBJ-1J can be outfitted with the following ordnance:

The PBJ-1J is defended by:

The PBJ-1J is the U.S. Navy version of the B-25J-1 Mitchell, however, these aircraft were assigned to U.S. Marine Corps marine bomber squadrons (VMB) as land-based bombers or ground attackers. This aircraft is virtually identical to its cousin, the PBJ-1H Mitchell, which is also just ground attack variant of the U.S. Army Air Corps/U.S. Air Force B-25 Mitchell bomber. The only notable difference between the 1H and 1J model aircraft is that the 1J removes the 75 mm cannon and replaces it with an additional 4 x 12.7mm Browning machine guns in the nose. Otherwise the same strategy and tactic for the 1H apply to the 1J. Fly almost at treetop levels in order to demotivate high altitude fighters from diving on you, and attack enemy ground targets. Ensure to use ground targets belts in order to maximize the effectiveness against light and medium tanks. Keep in mind that medium tanks will require precise aiming at the rear armour or roof from optimal angles in order to be effective. Reserve bombs for targets the 1J's machine guns under any circumstance cannot deal with (like heavy tanks and pillboxes, this is especially critical in Realistic and simulator battles as it is necessary to land on an airfield in order to retrieve new bombs).

While the PBJ can be effective at engaging other bombers, only engage enemy fighters if a good opportunity appears where an enemy is already engaged with another plane or is in low energy state (like stalling, taking off or landing). In these situations, the twelve 12.7mm machine guns will make short work of virtually all single-engined fighter aircraft even at long range with ground target belts. That said, under no circumstances should the plane be used to actively pursue enemy fighters since any remotely competent pilot will be able to outmanoeuvre you once they become aware of your presence. Ideally, a PBJ-1J should operate in close proximity to friendly fighters who can support it if it is engaged.

In addition to the USAAF's army aviation, В-25s of various versions were also used by American naval aviation, both in the USN's aviation forces and in the US Marine Corps, under the designation PBJ-1.

The version code usually coincided with the USAAF's code. For example, the В-25J bomber was re-designated the PBJ-1J. There were two exceptions to this rule: the В-25В was named just the PBJ-1, and the PBJ-1G was a torpedo bomber based on the В-25С or the B-25D (since the B-25G version was never in service with naval aviation forces).

So, the PBJ-1J generally corresponded to the B-25J bomber; only its radio equipment differed from that of the army machine.

The aircraft used for anti-submarine patrolling were often equipped with an AN/APS-2 radar scanner (AN/APS-3 later), whose antenna was located under the fuselage in the extendable housing, in the area of the lower turret. The antenna would extend into the air and be withdrawn before landing. There were also machines with AN/APS-3 radar housing protruding out of the upper section of the bombardier/navigator's cockpit or located on the right wing tip.

Some PBJ-1J bombers were produced with the AN/APS-3 radar mounted in a container in the right wing panel. But the mounting of a radar antenna in the aircraft's forward fuselage was considered better by the USMC's aviation units, and so the Marines often shifted it to the nose section on their own.

All naval PBJ-1s operated only from land-based airfields.

Navy PBJ-1s entered service with the USN's aviation fighting units in March 1943. The planes were used for the first time in combat in December 1943, on the island of Espiritu Santo, as anti-submarine warfare patrol aircraft.

The USMC began to use PBJ-1s in March 1944. Marine Corps PBJ-1s participated in the Battles of the Philippines, Saipan, Iwo Jima, and Okinawa. 15 USMC squadrons armed with PBJ-1 aircraft took part in military operations.