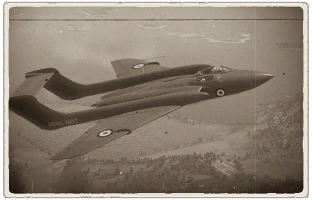 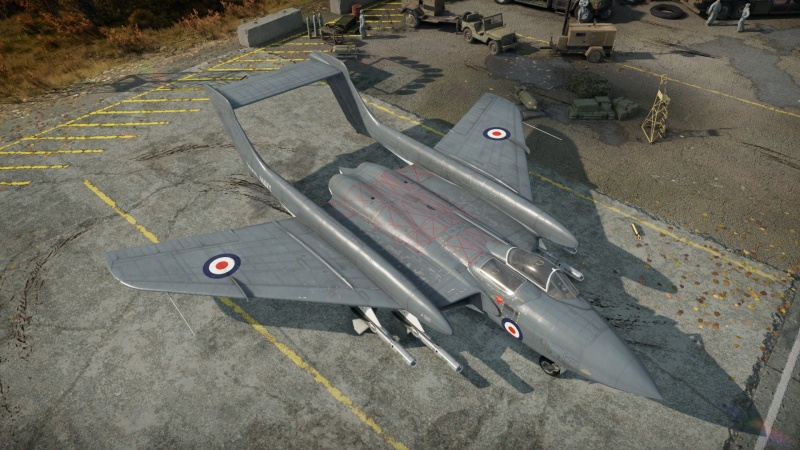 The Sea Vixen FAW.2 has no armour plates or bulletproof glass. The engines are both mounted in the centre of the airframe, with fuel tanks mainly in the wings. The tail overall is fairly weak and can be blown off easily by large calibre cannons, however the flap on the rear of the elevator can sometimes absorb shots, protecting the main elevator from damage. Unfortunately the Sea Vixen generally handles poorly when damaged, performance is reduced fairly significantly by damage to the wings and asymmetric damage can make control very difficult.

The Sea Vixen F.A.W. Mk.2 can be outfitted with the following ordnance:

Development of the Sea Vixen began in 1946 when de Havilland entered talks with the Admiralty on designing a future radar-equipped naval jet fighter with all-weather capability. Official requirements were drawn up in January 1947, by which time however de Havilland was already working on a design based on the preceding Vampire and Venom fighters designated DH 110.

Despite decreasing interest in the project by the late 1940’s, in September 1951, the first prototype conducted its maiden flight. However, only a year later, the same prototype crashed during an air show, thus further impeding the project’s progress. While the RAF abandoned the idea of purchasing the DH 110 by the mid 1950’s, the FAA gained a renewed interest in the aircraft and placed an order for 110 machines to be built in February 1955. Along with the order, the DH 110 received its official designation ‘Sea Vixen’.

As the Sea Vixen entered service with the FAA in 1959, de Havilland took note of the feedback gained from operational use of the aircraft and continued working on the Sea Vixen in an effort to improve its design. As a result, the Sea Vixen FAW.2 made its debut in 1962 which featured a number of improvements, of which one of the more notable ones was the ability to carry the Red Top air-to-air missiles. Over 140 Sea Vixens were built, most of which were converted over to the FAW.2 modification after its commissioning into service.

Although the British Sea Vixens never took part in any wars, they were still involved in a number of different combat operations primarily in Africa and the Middle East where they provided fire support for ground troops and flew patrols.