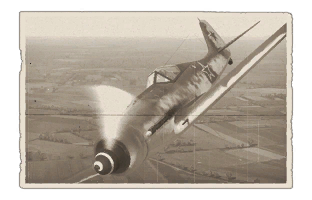 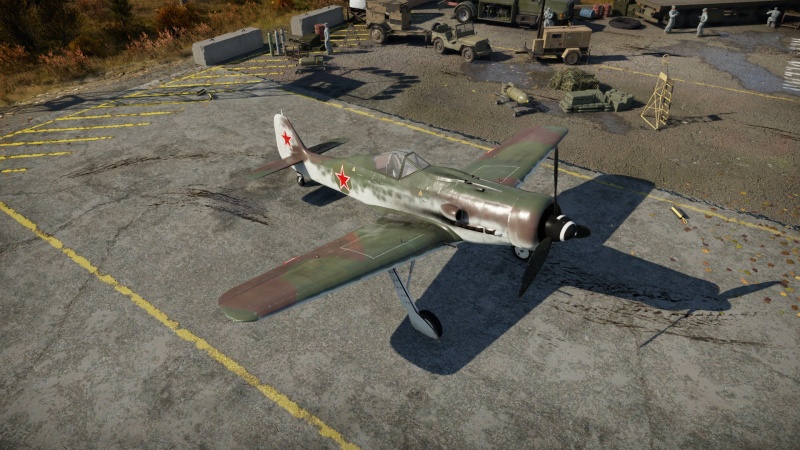 The ▂Fw 190 D-9 is a premium rank IV Soviet fighter with a battle rating of 5.0 (AB/RB) and 5.7 (SB). It was introduced in Update 1.37 as a premium vehicle purchasable in-game with Golden Eagles

The engine and airframe characteristics are the major area where the new inline engine of the 190 Dora series benefits. Not only is the Jumo 213A smaller and more aerodynamically clean than a BMW radial, it also has more power. Acceleration is extremely good across the entire speed range, but most notably at low-medium speeds and likewise for altitudes, being competitive with the vaunted La-7B-20 at low altitudes. The D-9 goes a blazing 621 km/h at sea level, which is 20 or so km/h faster than the Bf 109 K-4. Maximum speed at 2,200 m is 660 km/h (TAS) and rises from there, at 5,500 m it is 710 km/h, and at 8,000 m it's 680 km/h, steadily dropping off from there. Those are all extremely competitive numbers, beating out most of its opposition. Climb rate is equally good, taking 90 seconds to hit 2,000 m, 192 to 4,000 m, 297 to 6,000 m, and 430 to 8,000 m. Again, this is outstanding performance that is better than most aircraft it faces. Dive acceleration and maximum diving speed are both extremely strong traits of the D-9. This plane red-lines at about 880 km/h IAS, which is absolutely insane! I have yet to snap the wings off both in manoeuvring and extended dives. At the start of a RB match you can WEP for about 5-6 minutes before engine heat will give you trouble. The engine overheats at 120°C and the oil at 90°C. Engine heat decreases at a relatively slow rate while at 100% throttle and the MW-50 lasts for a total of 30 minutes.

It is widely considered that manoeuvrability is how well a plane can turn, which is the D-9's case its turning is generally poor. The D-9's turn rate is at its best above 450 km/h, where it can swing its nose around at alarming speed. at speeds below 320 km/h, the D-9 is one of the worst turners in the game. It is important to keep speeds relatively high to maximize your turn rate and manoeuvring potential. Energy conserving manoeuvres like yo-yos should be utilized to make the most out of your precious energy reserve. Never get in sustained turning engagements, always disengage early if you find yourself losing too much speed. While the D-9 may be a bad turner, it more than makes up for it with its extremely responsive and high rate of roll. The Fw 190s have always been known to dominate in this area, and the D-9 continues the 190 traditions of crushing the opposition here. Rate of the roll is sadly best utilized by more experienced pilots, but it is one of the most important traits for fighter aircraft. Try to think of manoeuvres that best utilize your roll rate advantage when on the defensive. The 190's manoeuvring traits suit a more Boom & Zoom/slash attack style of play; keeping crisp controls up to breakneck speeds combined with the roll rate and instantaneous turn ability makes it one of the best Boom & Zoom planes in the game. It is for this reason the D-9 is the preferred ride for veterans and newbies alike.

The Fw 190 D-9 carries a strong weapon set with two 20 mm MG 151 cannons in the wing root and two 13 mm MG 131 in the cowling. Like all 190s, the D-9 has a very generous ammunition load, packing 250 rounds per cannon and 475 rounds per MG. Do not be afraid to take low percentage shots, and feel free to pelt stationary targets at long distance. A good belt setup would be air targets for the cannons and stealth for the MGs. The bulk of the firepower here are the cannons, so maximizing your Minengeschoß count is important. Stealth belts for the 13 mm make your 20 mm rounds easier to track and make it more difficult for your enemy to see your fire due to the low amount of tracers the cannons spew. The MG 151 has a comparatively slow rate of fire and muzzle velocity if you are used to Hispanos and allied .50 calibre, so lead more than you are used to. As a whole, the D-9's weapons allow good snapshot ability while retaining a lot of firing time, making it a well rounded yet powerful package.

At the start of the battle, take the Fw 190 D-9 first out of your line up. Climb at a 30-45 degree angle while holding WEP (make sure you don't stall out). This plane should out climb everything it sees. Your priority targets are the highest enemy fighters. Bombers are fine too, but watch out for escort aircraft. Be careful when attacking heavily armoured bombers, as the MG 151 cannons sometimes take a while to bring down your target. Do not attack enemy aircraft under 1,000 m unless the match is near a close. If you do not have much energy and there is an enemy fighter less than 1,000 m higher, perform a head-on attack, but don't commit. Break about 600 m and dive. Once you reached 400 km/h, start climbing. Unless the enemy is flying an Fw 190, you will not be caught. Once you achieved air superiority above 3,000 m, look for climbing aircraft and aircraft tunnel-visioned on a target, as these generally result in easy kills. As for ammunition belts, use the Mine belt of the MG 151s and stealth for the 13 mm. These belts pack a punch and don't have much tracer ammunition, perfect for the surprise Boom & Zoom attacks. For the last tips, DO NOT TURN in combat under any circumstances (you will not out turn anything smaller than a B-17 and lose precious speed in the process). Also, always maintain at least 2,000 m of altitude (if you are caught at low altitudes, you will be caught and killed). In conclusion, this is one of the most OP planes in arcade. It has better top speed and climb rate than 6.0 BR aircraft and has a great armament. In the hands of even inexperienced pilots, this plane is almost invincible. This is possibly the best and most forgiving Boom & Zoom aircraft.

Kurt Tank, the designer of the venerable Fw 190 lineup quickly realized by 1943 that the field of aerial warfare was changing rapidly. The world had moved on beyond dive bombers, and the allies had begun forming massive, four-engine bomber wings that devastated Axis ground troops and factories. At the time, Fw 190s played similar roles to the American P-47 Thunderbolts, serving as ground attack planes and low altitude interceptors. Fw 190s retained air superiority over allied forces all the way up to the introduction of the British Spitfire Mk. IX. Despite this impressive service record, Fw 190s had one flaw, which would soon usher in the need of the "Dora" Line-up. Their performance was hindered drastically at higher altitudes, where aerial warfare was now moving towards. Germany, in desperate need of fighters to engage and stop these massive bomber raids had turned to Messerschmitt and Focke-wulf to produce a high altitude interceptor, and Kurt Tank's response was the Fw 190 D-9.

Unlike previous models, the "Dora" series boasted an improved engine. Specifically, a Jumo 213A bomber engine, more commonly used in the Ju-88. This much larger engine required for the hull of the Fw 190 to also be extended in the front, and for balancing reasons, the tail as well. The D-9 also sacrificed its 4 x 20 mm MG-151 cannons previously used in previous Fw 190s for two 20 mm MG-151 cannons, and a twin set of 13 mm MGs over the previous models' MG-82s. With an impressive 700+ km/h speed, the D-9 proved to be one of the fastest interceptors to be rolled off a German assembly line. Despite this, the D-9 was instead used for ground attack rolls and fighter interception, using its speed to drop its payload and vanish long before enemy Flak had the time to line up a shot.