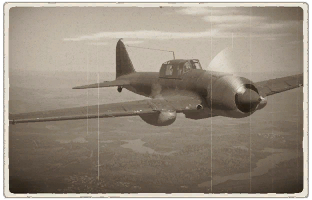 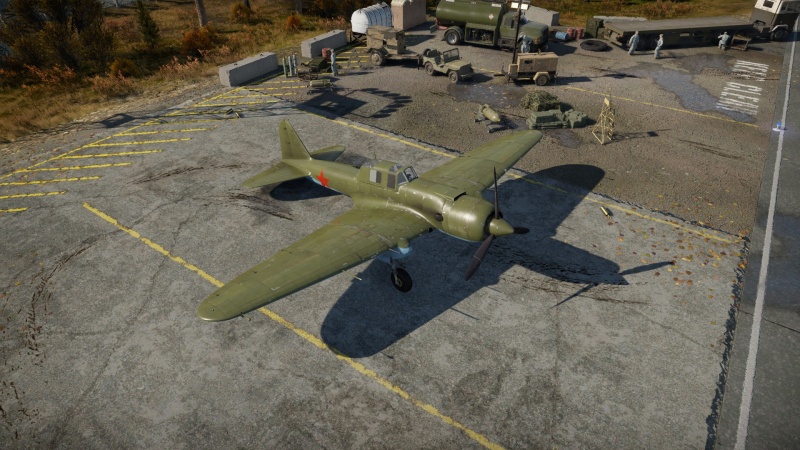 The IL-2 M-82 is a premium gift rank II Soviet strike aircraft with a battle rating of 2.7 (AB/RB/SB). It was introduced during Update "Starfighters" as a reward for World War Mode Season 3: Road to the West. This unique IL-2 variant is fitted with a Shvetsov M-82 engine rather than the standard Mikulin AM-38, and also benefits from having a rear gunner. Its poor flight performance and low top speed make it lacklustre in an air-to-air role, but its effective weapons and great secondary payload options make it a highly effective ground attacker in both air and mixed battles.

The IL-2 M-82 has characteristics relatively in-line with those found on other variants of the IL-2 family. It has a very slow top speed, meaning that almost every fighter at its BR can catch up to it. It also has a slow climb rate, especially in RB. On the plus side, the Sturmovik actually has a very good turn rate and can even out-turn some fighters when flown correctly. However, this should not be used excessively as the aircraft has horrible energy retention and will lose speed ferociously in extended turns.

The Shvetsov M-82IR engine found on this IL-2 variant produces almost 2,000 hp at takeoff, much more than its original AM-38 powerplant. This gives the IL-2 M-82 a slight performance advantage over other IL-2 variants at low altitudes, where its engine performs the best. However, this engine will quickly suffocate at high altitudes as it was not designed for high-altitude performance.

(Note: the gunner is rear-facing)

The IL-2 M-82 can be outfitted with the following ordnance:

The IL-2 M-82's effective frontal armament and excellent loadout options make it an excellent ground attacker in both Air and Mixed battles. Its lacking flight characteristics and slow top speed make it unsuitable for air-to-air engagements, as it will be quickly shredded by enemy fighters.

The IL-2 M-82 differs from earlier IL-2 variants by having the Shvetsov M-82 engine in place of the standard Mikulin AM-38 engine. This new engine provides greater power, giving the IL-2 a slight performance boost, but lacks armour protection, unlike the other IL-2 variants. As a result, greater care must be taken to avoid soaking up too much ground fire, as any stray flak could easily damage the aircraft's engine or set it on fire.

However, this aircraft also benefits from having a rear gunner, equipped with a 12.7 mm Berezin UB machine gun. This weapon is highly effective and can easily set enemy aircraft on fire with several bursts. However, it lacks the punching power of heavier cannons, meaning that more hits will be necessary to deal the same damage.

In Air AB, the IL-2 M-82 can be very well utilised as a ground attacker. Its RS-82 rockets are well-suited for destroying soft targets while the larger RS/RBS-132 rockets and bombs (100+ kg) can be used against harder targets like pillboxes and tanks. In particular, the 2 x 250 kg FAB-250 loadout is very effective against hard targets, and will often destroy medium/heavy tanks or light pillboxes with even a near miss - a direct hit guarantees a kill. This aircraft also benefits from an excellent initial turn rate in AB, giving it some air-to-air capability. However, its poor energy retention prevents it from performing well in a dogfight, so it is recommended to only engage enemies that are already distracted or dogfighting. As well, the IL-2 M-82 inherits the strong fuselage of prior IL-2 variants, meaning that it is quite capable of soaking up enemy fire. However, the wings, tail, control surfaces and engine are all rather vulnerable, so it is not recommended to engage too many bogies at once.

In Air RB, the IL-2 struggles with its manoeuvrability. As a result, it will fare much worse in any air-to-air situation. If being pursued by enemy fighters, perform evasive manoeuvres and bait them onto the aircraft's six, where the tail gunner will be able to fight back. As well, never engage fighters with a higher energy level, as they will be able to force the IL-2 into a energy/turn fight where the plane's speed will bleed rapidly.

The IL-2 does very well in air RB as it can use its payload options to its full potential. Diving attacks are ideal for engaging harder targets as it makes it easier to aim bombs and rockets - however, be aware of airspeed, as the IL-2's control surfaces tend to lock up at speeds above 550 km/h.

In mixed battles, the IL-2 M-82 can be used effectively as a CAS aircraft with its large payload options. The RS and RBS 132 rockets are effective against armoured targets, though it is worth noting that the RBS-132 rockets have no explosive splash, meaning that only direct hits will do damage. The smaller RS-82 and RBS-82 rockets can also be effective, though they have far less punching power. The 20 mm ShVAK cannons can be used against soft targets, but are inadequate against harder targets due to their low max penetration of 26mm when using Armoured vehicles Belts. A great strategy for mixed is to dive on an enemy tank, fire rockets/bombs/guns at a high angle, then pull out and disengage, followed by a second bombing run.

In Air RB, a team of IL-2s can easily win a game if left alone, so ensure to destroy them quickly. An effective option for dealing with the IL-2 is to dive on them while they are engaging ground targets - a 600 km/h dive at a 20-30 degree angle allows for plenty of time on target without giving the tail gunner much time to engage. As well, the IL-2's tail gunner has very limited lateral (left-right) range, so engaging the aircraft from the side will also be effective.

The Il-2 has a sturdy airframe, meaning that it can tank hits very well. This means that any machine guns will take a while to destroy it. However, the aircraft's wings and tail are quite flimsy, and kills can often be achieved by destroying the aircraft's tail control.

In early July of 1941, due to the rapid advance of German troops into central Russia, there was a threat of a reduction in the supply of IL-2 AM-38 aircraft engines. Anticipating possible issues, Sergey Ilyushin suggested adapting the Sturmovik engine to the more common M-82 engine to the Soviet military aviation authorities. In a very short time, the aircraft engineers in the Ilyushin design bureau built a prototype attacker aircraft for testing with the new engine. The prototype also featured a much anticipated defensive turret with a position for an air gunner, the need for which became evident after the first IL-2 sorties in WWII. Unlike the production version, the IL-2 with the M-82 engine did not have engine compartment protection - the armored capsule was shortened and ended with an armored plate between the pilot and the engine. The new engine also required the installation of an updated propeller. The gunner's seat was positioned to the rear of the cockpit, where a blister turret with a 12.7mm UBT machine gun with armored glass was located. Tests of the new version of the attack aircraft demonstrated that such a design does not have critical problems despite its inferior speed to the regular IL-2. By the spring of 1942, a prototype with the M-82IR engine appeared, which was better suited for low altitudes, from which the attack aircraft was operating most of the time. Flight characteristics have been improved, but by that time the production of native AM-38 engines was normal and there was no need to modify the IL-2 with M-82 engines any more.