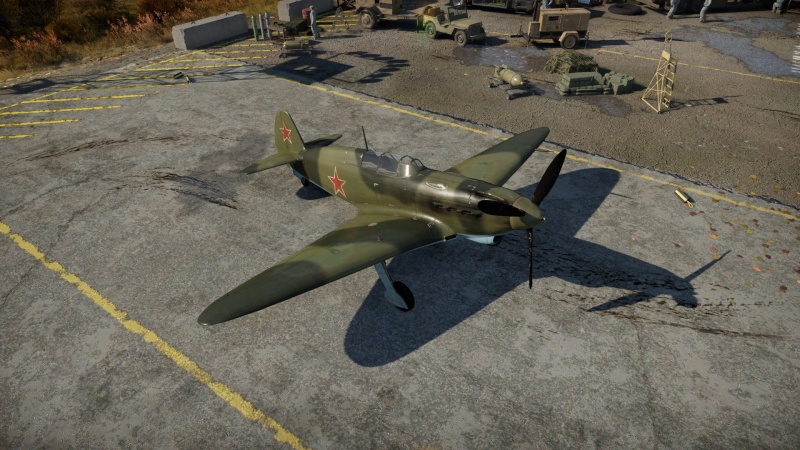 The aircraft has a lightweight body and a good engine making it very capable of dealing with any kind of enemy. It has decent manoeuvrability for its battle rating, although not as good as the other Yaks. It is most efficient up to 4,000 m (13,123 ft). It's not recommended to use in a turn fight, but if necessary extending the flaps helps a lot. It can climb well making flying away not so difficult. The Yak 7B can withstand from 10 G to -8 G.

The aircraft can take a few hits in the engine and in the hull. It's not fantastic, like the P-400, but is OK. It has 8 mm (0.31 in) of steel on the seat. You can avoid most of the enemy aircraft but stalling this fighter is a death wish. Any Bf-110 or the other Boom & Zoom type aircraft will kill you. It's effective to gradually reduce your speed and make circles clockwise to make enemies overshoot.

The Yak-7B is a versatile aircraft that can destroy both ground or air targets.

It is easiest to destroy anti-aircraft artillery or lightly armoured vehicles with your cannon, MG-s or suspended armaments. If you can aim your rockets good enough you can even destroy a tank. The easiest tactic for pounding ground targets is flying low and fast.

For destroying air targets you can get rockets and go head-on with light aircraft like: I-16, Japanese zero-s and biplanes. If encountering heavily armoured airplanes fire rockets from a safe distance and turn away. There are Boom & Zoom options for bombers and ground attack vehicles that come near the ground. Your most common targets should be: Beaufighters, IL-2 s, F-4U-s, Bf 109-s and Hurricanes. To deal with less manoeuvrable aircraft, force them into a turn and take your time. You have a very limited ammo storage and you should fire precisely.