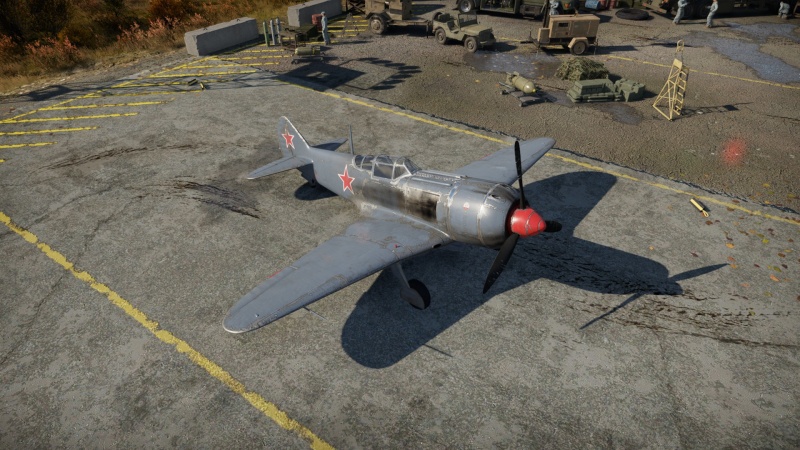 The La-7B-20 is placed quite low in the Battle Rating spread, which means that you will still engage Rank III aircraft, the majority of which you will out-perform at low altitude.

The key to staying alive in the La-7 series lies in deceiving the enemy. By flying at around 4,500 m (15,000 ft) altitude, you present yourself as an easy target for Boom & Zoom aircraft that are flying at higher altitudes. When you spot someone diving at you, break off and evade his burst, while slowly luring him to lower altitude, then engaging in manoeuvre combat - this way you will start gaining the edge while the enemy loses his speed and momentum in the turn. Another habit worth developing in the La-7B-20 is ammo conservation; because the available load per gun has decreased compared to the La-7, combined with the quicker fire rate of the cannons, you can very quickly run out of ammo if you aren't careful. Thus, it is crucial to only take shots that you know will hit. By following these rules, you will soon find yourself efficiently researching the final Lavochkin piston fighter: the La-9.

One strength that you will want to take advantage of is the excellent low-altitude performance. Ideally, you want to engage your enemies at altitudes lower than 4 km. Higher up, the power output of the engine reduces drastically, making you an easy target. Aside from its speed, the La-7B-20 possesses very good turning capabilities - while it is not as good a turner as some British and Japanese designs, it can give many German and US aircraft a run for their money. Because of this manoeuvrability, good energy retention and speed, the La-7B-20 is very capable when engaging in defensive manoeuvres and duels, the latter being the ideal combat situation for the La-7.