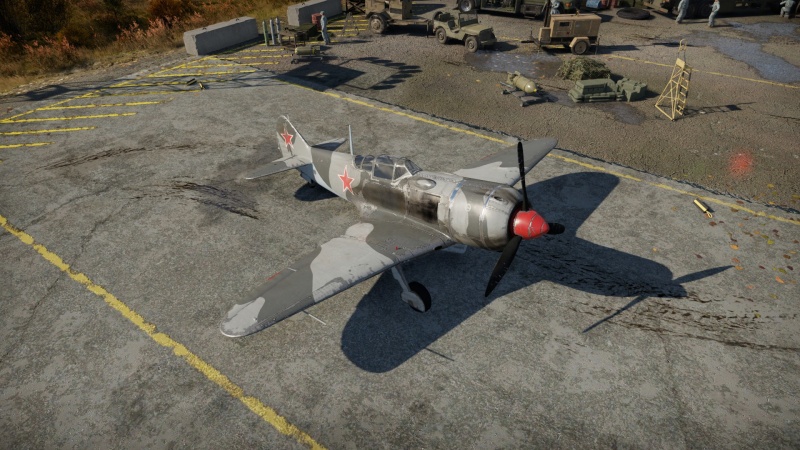 The La-7 is an effective mid-low altitude interceptor. It has many unique capabilities that make it an exceptional fighter. As the successor of the La-5, it has improved aerodynamics.

One habit you have to take to heart is aiming strategies/skill. The 2 cowling-mounted ShVAKs are quite ineffective in side-on approaches as well as longer range fire due to the fact that there is little spread to the cannons and low damage and hit detection compared to comparable 20 mm cannons such as the Hispano and MG-151. The low spread allows for greater damage upon hitting your opponent - if used correctly, the cannons can be extremely lethal.

The aircraft is placed quite low in the Battle Rating spread, which means that you will still engage rank III aircraft. Do not underestimate them. If flown up to their respective strengths, planes such as the Bf 109 G-2 and Spitfire Mk Vc are superior to the La-7. The strengths of both La-7 variants lie in very good low altitude performance - ideally, you want to engage your enemies at altitudes lower than 4 km - higher up, the power output of the engine reduces drastically, making you an easy target. Aside from the speed, the La-7 possesses very good turning capabilities - while it is not as good a turner as some British and Japanese designs, it can give many German and US aircraft a run for their money.