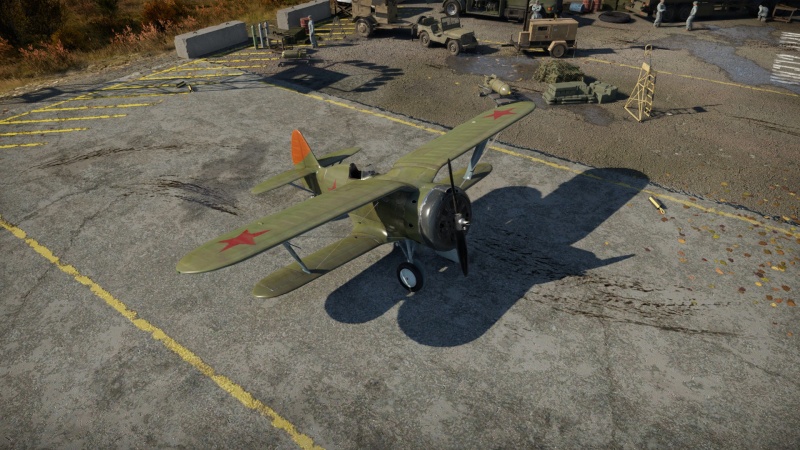 There is one thing you need to know about the I-153; you will out turn everything it fights. Not a single plane the Chaika fights will win against the I-153P in a turn fight. At a BR of 3.0, however, the Chaika's once moderate speed is now very bad. Nearly every plane will be faster; especially due to how the Chaika locks up at high speed, making it extremely difficult to manoeuvre at high speed. However, plenty of people underestimate the lowly Chaika, and attempt to turn with it. If you notice someone is trying to turn fight you, simply out turn them and light them up with 2 x 20 mm. However, bear in mind the Chaika is also more fragile than most planes in the game; a single 20 mm shot on it is almost always death.

The I-153P can be outfitted with the following ordnance:

Ki-27 otsu, N1K1, He 51, Gladiator, etc. - Those commonly seen planes are equally good at turnfights and will be a hard target to down since they are very small and agile. To deal with them you need to practice leading and deflection shots, plus manoeuvres like barrel rolls and scissors. Fortunately they can be damaged easily by your ShVAK.

Do 17 Z-2 - This early twin engine plane always shows up as an AI controlled recon aircraft that you have to down, which is good news as AI won't manoeuvre aggressively. However this plane is extremely durable even for the twin ShVAK. When it shows up as an AI, deflection shots are not recommended as the small shooting windows really does nothing. Instead, try disabling its 2 gunners first, then just sit behind it and burst on its wings and engines. When attacking the gunners try to not get your engine damaged by pulling evasive manoeuvres as soon as the bullets come close, since the Do 17 can outrun the I-153 in a level flight.

He 111 H-6 - This bomber is not only quite durable, but also pretty fast. In level flight it can outrun the I-153 rather easily. Avoid being on its six as it will have at least 2 x 7.92 mm MG facing its tail, and their rapid rate of fire and good penetration is a big threat. Either go for a head-on or use deflection shooting and aim for its engines. If you cannot keep up with it, disengage. If it flies far higher than you, change your target.

Sunderland Mk IIIa - This flying boat is like a low-tier Be-6. Its huge fuselage is very spacious and can absorb lots of bullets and shells. It also has lethal defensive firepower: two 7.7 mm in the nose, four forward-facing, two on the top and four at the tail, so attacking from behind, in front or above aren't the best options. Dive under it and suddenly pull up to shoot its defenceless underpart. Aim at the large wings and engines, avoid shooting the fuselage.

Should you be facing an I-153P, whatever you do, do not attempt to engage in a turn fight. The little biplane is more than capable of out turning even the A6M2 Reisen. Calmly deploy Boom & Zoom tactics against it; fly in from above, light it up, and fly away. Try not to keep yourself level for too long, as there is a chance it will be able to hit you if you speed away. It has a moderate climb rate too and will climb after you with relative effectiveness if you fly back up after the "zoom".