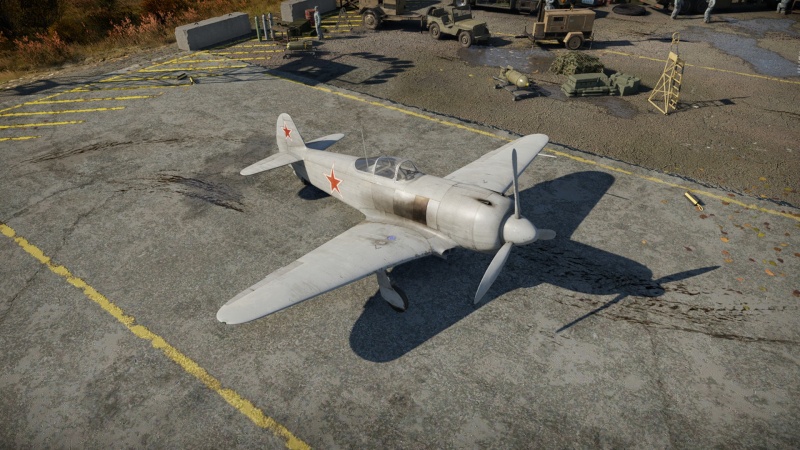 Being an improvement on the Yak-3P, one can expect a similar playstyle to the feared Red Soviet Menace, but with more versatility thanks to the improved engine providing a large increase in speed. The -3U provides quite a unique experience, as it can out-turn the enemies it can't out-run, and it can outrun the enemies it can't out-turn, so a smart pilot will use this versatility to their advantage. One should stick with energy fighting for the most part, but can certainly turn-fight with less manoeuvrable opponents, which include the P51 line.

The main drawbacks of the 3U are its poor armament and poor performance above 2,000 m. The two B-20S cannons provide lacklustre stopping power at this tier and have a nasty habit of sparking, and to top it off, they have a low ammunition count of 120 rounds per gun. Due to the lack of a supercharger, the engine's output greatly decreases above 2,000 m; it is recommended to entice opponents (mainly Germans & Americans) down to altitude in order to engage them. The solid performance combined with the weak armament makes the -3U a very volatile plane. A newer or inexperienced player may find the performance enticing, but will struggle to do well if they're too trigger happy and have not used to the Soviet 20 mm very much. However, a good pilot will be able to use the upsides to these cannons (accuracy, high rate of fire and ability to start fires) to their advantage. Also worth noting is that "Armoured Targets" belts from these cannon tend to set fuel tanks on fire quite easily, so aiming at them and at the engines of enemy aircraft will likely yield bright, warm results. The Tracers belt is also a noteworthy option, as it is only IAI ammunition, and will easily take off control surfaces with one hit, as well as help someone who is not so confident with the ballistics of the cannons aim.

The Yak-3U is based on the Yak-3 VK-105PF 2 variant, with some major modifications. A Yak-3U is also referred as Yak 3U/Ash-82FN. It was first flown on the 29th of April 1945, it was developed by Yakovlev design bureau and powered by the almighty Ash-82FN engine. It was one of the best power plants in the world at that time. Created by Design Bureau No. 19 and manufactured by Factory No. 478, it provided 1,850 BHP. This is the same engine as used on other legendary & iconic Soviet fighter and attacker aircraft, such as the Tu-2, La-5 & La-7 planes.

The engine was designed in the Soviet Union (Russia) by Design Bureau No. 19 it was a technological innovation based on its licensed built version Wright R-1820 cyclon power plant. The Ash-82FN featured direct fuel and afterburner injection systems to give it an additional output of 250 BHP, bringing it up-to 1850 BHP. Giving it a top speed of 705 km/h (438 mph) over its western counterpart Wright R-1820 which only provided 1,600 BHP. The Ash-82FN allowed the Yak-3U, to hit 5 km in 3 minutes.