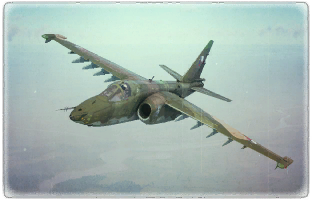 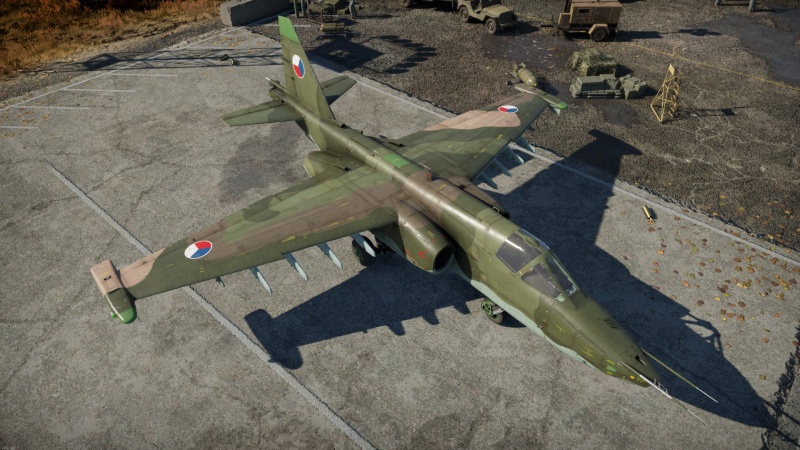 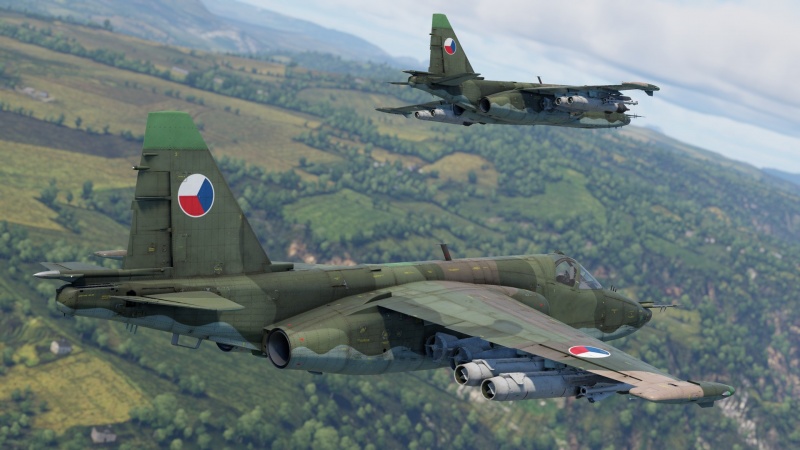 The Su-25K (NATO: Frogfoot; unified for all variants) is a premium gift rank VI Soviet strike aircraft with a battle rating of 9.7 (AB/RB/SB). It was introduced in Update "Drone Age".

The export version of the base model Su-25 for Warsaw-Pact countries and overseas customers with minor differences in terms of certain equipment in Czechoslovakian delivery ; with the extensive options for ground attack ranging from bombs, rockets and AGMs, as well as self-defense AAMs, the Frogfoot will prove extremely deadly to ground units without anti-air support and sometimes rotorcrafts of its tier.

Same as the base model in Soviet service, Su-25K is equipped with a pair of Tumansky R-195 turbofan engines on the sides of the airframe and being one of the last jets of Sukhoi with a straight wing. Since Su-25K is designated as an attacker and low-altitude maneuverability is one of the key of the jet, therefore it will have a better time at such altitudes and the power output of the engines will make sure it could retain its energy; another feature of Su-25s are the extensive protection all-around for the pilot and critical components of the jet, although this means it could survive gun strafes or even sometimes near-miss missiles, this also means the jet is heavier and therefore affects its maneuverability when facing certain jets.

The Su-25K is known for its survivability, anecdotally being able to take a few missile hits without suffering any damage compromising its airworthiness, though this ability is inconsistent and should not be relied upon. The airframe is able to sustain rear hits from missiles with a small warhead, especially the FIM-92 Stinger. Occasionally the Su-25K is able to sustain continued hits from Stingers and Roland 1s.

128 flares/chaff launched two of each at a time provide the Su-25K with the chance to evade missiles, which should be the primary form of defense. A lack of afterburner increases flare effectiveness, only very modern missiles such as aim-9L are able to track the aircraft from behind. Chaff only defends against radar locks from behind the aircraft.

The fuel tanks are self-sealing and the aircraft has an engine fire extinguishing system. A single section of fuel tank is protected by 18 mm of steel.

The Su-25K can be outfitted with the following ordnance presets:

The Su-25K is a support plane. It is a slow plane compared to most other planes, therefore altitude is important since you are likely to Boom and Zoom. You need to look around constantly to prevent unexpected attacks. Your main worries will be planes like the A-5C or the F-5C. Those planes are fast and can dogfight you. Gain altitude and pick on unsuspecting targets. Your R-60MK missiles are very good but shooting them at 3 km distance will be the most efficient. You can also save your missiles if you're caught in a head-on, or you can spray your guns. If you see tough enemies which are alert of your presence, try engaging them first.

As one of the export jets of Soviet Union then later Russia and Georgia (the Tbilisi Aircraft Plant), the Su-25K has been exported to every major continents of the world in different amounts with some victories against their enemies; with most of the users being Eurasian countries.

Records showed that Czechoslovakia, one of the Warsaw-Pact countries until late 1980s, received their batches of 36 Su-25Ks and 2 UBK trainers from Soviet Union in 1984 as the composition of the 30th Attack Air Regiment in Pardubice Airbase then later 1st Mixed Air Corps in 1990; after the dissolution of Czechoslovakia, the succeeding Czech Republic and Slovakia split their inventories with Czech receiving 2/3 (24 25Ks and an UBK) of these jets while Slovakia received the remaining ones in 1993. Both countries didn't used their Frogfoot in any combat operations or intended for any further service in respective air forces where Czech decommissioned their Frogfoot in December 2000 while Slovakia sold most of their Frogfoots to Armenia in mid-2000s.[1] [2]

Su-25K Frogfoot FULL Review - Should You Buy It? - Tankenstein