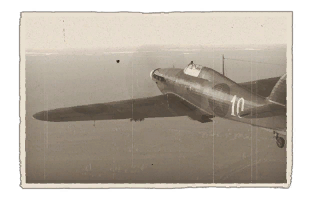 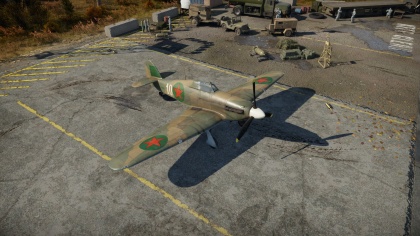 The ▂Hurricane Mk IIB is a premium rank II Soviet fighter with a battle rating of 3.0 (AB/RB/SB). It was introduced in Update 1.51 "Cold Steel".

The Hurricane Mk IIB (USSR) is armed with:

The Hurricane Mk IIB (USSR) can be outfitted with the following ordinance:

Although a highly successful and popular fighter, by 1940 the Hurricane Mk I was already showing itself to be inferior to enemy fighters such as the Messerschmitt 109. Experience from the Battle of Britain had also proved that the Hurricane’s rifle-calibre 0.303 machine guns were inferior to larger calibre weapons being operated by enemy aircraft.

The Hurricane II was developed by adding the 1,280 HP Rolls Royce Merlin XX engine and slightly lengthening the fuselage. This Hurricane Mk IIA was further modified by adding the ‘universal wing’ to allow the use of underwing ordnance such as rockets.

The aircraft arrived via Lend-lease in Russia during the early stages of the Great Patriotic War (1941-1942). Before putting the Hurricane into service, the Soviets replaced the 7.7 mm Brownings with their indigenous 2 x 12.7 mm Berezin-UB MGs and 2 x 20 mm ShVAK cannons. This armament proved to be much more powerful, even surpassing its contemporary rivals, such as the Bf 109 F, in weight of fire. The Soviet Hurricane had far more weight of fire than its Commonwealth counterpart and this is why it resides at its rank position, much like the Sea Hurricane Mk IC and its four Hispano 20 mm cannons.

In battle, the Hurricane does not have sufficient performance to beat such formidable enemies as the Bf 109 F-4 or P-63C-5 in a 1 vs 1 duel, particularly when in an up-tier situation. The pilot should climb at an angle between 250-270 kph IAS, while slightly side climbing. This will almost always prevent you from being the first person engaged and leave you above the ball of dogfighters mixing it up at the lower altitudes. From here pick on targets of opportunity, those low on energy or wounded. Here you can benefit your team by using your heavy armament (double that of a typical Russian fighter at this rank) to quickly dispatch these targets before escaping. Bear in mind your low ammo count; only 100 RPG on the machine guns, half of most fighters. While the Hurricane can outturn many other fighters if forced into a 1 vs 1, against both Allied (Spitfire) and Axis (A6M, Ki-44, Ki-43) there will almost always be another plane which can outturn it. Here you want to pick your battles while turning with some and with others extending away to reclaim an energy advantage and try again.

Right after Hitler invaded the Soviet Union in June 1941, Britain offered immediate assistance and send a wing with two Hurricane equipped squadrons to Murmansk in September. The Brits were happily welcomed near the front-line by their Russian Hosts. Flt Lt. Jack Ross, who recently gained ace status, wrote in his memoirs: "The whole wing passed out completely after drinking vodka. I was so bad I completely missed the concert given in our honour."[1] During the deployment, No. 151 Wing got quite some action, before defensive patrols and training duty became predominant. Many Russian pilots were trained by the Brits, before the Hurricanes were handed over to the Soviets on 18 October. The Wing has scored 15 kills for the loss of one aircraft.

In late 1941, Hurricanes started to arrive in the Soviet Union as a key part of the first batch of lend-lease aircraft supplied by the Western Allies, together with Curtiss Tomahawks IIs and Kittyhawk Is and Bell P-39 Airacobras. They joined the latest generation of Soviet fighters - LaGG-3 and Yak-1 -at a time when production of the MiG-3 had been discontinued. Each type had advantages and disadvantages. Indifference to the other aircraft, the Hurricane had been developed and combat proved since its creation: the other aircraft were still operational and design defects. The main drawback for the Hurricane was its lack of speed, although all the fighters in the Russian inventory lagged behind their main rival, the BF-109 F, in speed and rate of climb. However, in the turning fight, the Hurricane was superior to any BF-109."[2]

Most combats between Soviet and German fighters in 1941-42 began with a head-on formation attack. Usually, a ‘defensive circle’ would then be formed in which pilots would protect the tail of the aircraft flying in front of them. In a defensive circle, the parameters of maximum speed and rate of climb had no practical significance, which nullified the advantages of the Luftwaffe fighters. Firepower was often the decisive factor, and the Hurricane in Soviet service had no equal in this respect. The Soviet Hurricane, with its two 20 mm ShVAK guns and two 12.7 mm large calibre UBK machine guns producing a weight of fire of 3.84 kg (8.45 lb) per second, surpassed not only all single-engine Soviet fighters but also its German opponents. The Bf 109 F, armed with just one 20 mm MG 151 cannon and two 7.92 mm MG 17 machine guns, produced a weight of fire of 1.99 kg (4.38 lbs) per second. Consequently, its pilots declined to engage Hurricanes in head-on attacks. The British fighter’s sturdy construction and relative bulk also made it a stable gun platform, being able to pour a concentrated stream of fire onto its target.[2]

In 1942 the Hurricane was the most numerous Western Allied fighter in the inventory of the Soviet Union’s Red Army and Naval Air Force units serving on the large Soviet-German front. A major expansion of Red Army Air Force fighter regiments had been made possible by the monthly shipments of equipment from the Allies under lend-lease, which had been arriving since December 1941. In the winter of 1941-42, these shipments were needed more than ever. The halting of the German advance on Moscow in January 1942 encouraged the Soviet command to build on this achievement with a series of offensive operations along the western, northwestern and Kalinin fronts. Many of the fighter regiments equipped with the Hurricane were the first to be mobilized along these fronts. The Hurricane’s contribution to the Soviet war effort has tended to be overshadowed. Its performance was considered inferior to that of the Messerschmitt Bf 109 Fs and Gs opposing it. Many reports from this period, when Soviet fighter units suffered heavy losses, characterized the Hurricane as obsolete, bulky and slow. It was almost considered to be a burden on the fighter units operating it. And the Hurricane was unlikely to be the mount of an ace fighter pilot. Of course, there is a grain of truth in this. It was difficult to measure the Hurricane’s strengths against the latest Messerschmitt fighters, and it was hardly surprising that the more highly trained pilots tried to get themselves transferred to units operating faster and more manoeuvrable fighters at the earliest opportunity.

The highest scoring ace of the Northern Fleet Air Force, twice Hero of the Soviet Union (HSU) Boris Feoktistovich Safonov, led the first Soviet fighter air regiment equipped with Hurricanes. He flew 44 sorties between October 1941 and February 1942 with the type. Although he encountered enemy aircraft only twice during this time, on each occasion, he was able to increase his personal score. He was credited with shooting down a Bf 109 and a He 111 for his 15th and 16th aerial victories. But when more modern Kittyhawk I's arrived in-theatre Safonov immediately transferred from the Hurricane to the American fighter, which, until his death in combat on 30 May 1942, enabled him to account for four more aircraft (three of these were Ju 88s downed on his final ill-fated mission).[2]

Another reason for the negative attitude towards the Hurricane was that Soviet fighter regiments equipped with imported aircraft quickly lost their operational readiness during the intense combat of 1942. The continued negative attitude was due to inadequate flying training and a lack of replacement pilots and aircraft in reserve to make good losses suffered after just two or three weeks of combat. Units had to be pulled back to the rear to be re-equipped, as a rule, with another aircraft type. It was factors such as these that left bitter memories of the Hurricane with many Soviet pilots, who flew the fighter for such a short period that there was no possibility of them becoming aces.

To sum up this analysis of the Hurricane, it was a fighter whose combat, and flying characteristics enabled it to stand above its contemporaries in the Red Army Air Force inventory during the first half of 1942. Thanks to these traits, most combat reports from Soviet fighter regiments of the period highlighted the aircraft’s positive combat characteristics. The Hurricane can, therefore, be described as a fighter that fully met the demands of the air war being fought in the complex circumstances of the Soviet-German front in 1942. It was simple to fly, did not require special training and was able to operate from airstrips in the field. Pilots with little training not only became rapidly familiar with the aircraft but could also fly it confidently, and were able, with the improved Soviet armament installed in the Hurricane IIB, to shoot down enemy bombers. They could also successfully engage any hostile aircraft.[2]

The RAF’s first eight gun monoplane fighter, the Hawker Hurricane was revolutionary when it first entered service in December 1937. The Hurricane was the result of Hawker Aircraft Ltd’s efforts to create a monoplane fighter based on one of the best biplane fighters of the time, the Fury. The fuselage required minimal changes to install an enclosed cockpit; the tail unit was taken from the aircraft’s predecessor and the landing gear was made retractable using a hydraulic drive. The engine selected was a 1030 HP Rolls-Royce Merlin II, and the new fighter was armed with eight 0.303 inch Browning machine guns.

The Hurricane was a robust, reliable, easy to maintain and agile fighter with a good rate of turn at low level. Its survival rate was high, and it became well-loved by its pilots. By the outbreak of the war, the Hurricane’s original two blade fixed pitch propeller was replaced by a three bladed variable pitch design; early combat experience in France also highlighted a requirement to replace the fabric covered wing with a stressed metal skin, plus the addition of a bullet proof windscreen and armor for the pilot and the more powerful Rolls Royce Merlin III. The Hurricane Mk I achieved legendary status during the Battle of Britain, where it equipped 32 of RAF Fighter Command’s squadrons, compared to only 19 squadrons of Spitfires. Whilst not as fast or agile as the Spitfire, the Hurricane had a greater ability to tolerate battle damage and possessed a more stable firing platform for its armament; for this reason, a standard Fighter Command tactic was, where possible, for Spitfires to deal with German fighters whilst the Hurricanes tackled the bombers. RAF Fighter Command’s sole Victoria Cross was honoured upon a Hurricane pilot; on 17th August 1940, Flt Lt JB Nicholson of 249 Squadron received severe burns when he gallantly remained at the controls of his blazing Hurricane to shoot down a Messerschmitt 110.

Pages of History: Hawker Chariton - War Thunder Official Channel
The Shooting Range #74 - Pages of History section at 08:08 recounts the destruction of a large Ju 87 formation by a few Hurritons in 1942.