From War Thunder Wiki
Jump to: navigation, search
I-301 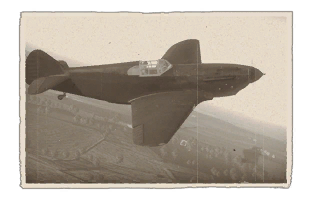 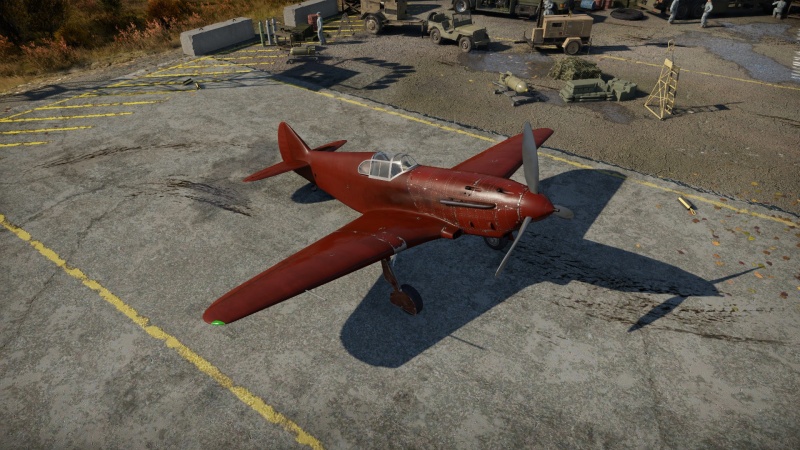 The I-301 is a gift rank II Soviet fighter with a battle rating of 4.0 (AB) and 3.0 (RB/SB). It was introduced during Update 1.43 as part of a giveaway in the 2014 Winter Holiday event. Currently you can only acquire an I-301 coupon in a trophy or buy one at the Gaijin market to unlock this aircraft.

The I-301 construction is similar to that of the LaGG-3 fighters, not too surprising considering the I-301 is the prototype of the LaGG-3 fighter series, and as such, the flight characteristics are also similar to the other planes in the family. There is almost no difference between the I-301 and the in-game LaGG-3-8. Besides being only marginally faster than the rank II LaGG-3-66 in level flight and in a climb, the tactics proposed in the article for the LaGG-3-8 hold true, with the exception of the massive increase in firepower.

The most distinctive feature of the I-301 is its complete dark red coat; given there are no other camouflage options, the I-301 is permanently linked with its red paint.

The I-301 construction was wood and polymer, which contributed to its flying capabilities. Contrary to beliefs, the wooden construction was quite resistant to catching fire, but all the fuel tanks in the wings and fuselage are quite combustible. If one looks at the I-301 and compares it to other Soviet aircraft, there are some similarities due to features taken from other aircraft models. The fuselage was a similar construction of the MiG-3 fighters. The wings are similar to that of the Yak-1, the only difference being the I-301 wings are built in two parts, as evidenced by the bands in the middle of the wings.

The I-301 firepower is a step above the other LaGG-3 fighters due to the extra machine guns and powerful cannon. The cannon is not the usual ShVAK (20 mm) seen on the production LaGG-3, but is a 23 mm PTB-23 cannon, which in-game is similar to the 23 mm on the IL-2 attackers, meaning they have great stopping power when it hits and can even be used against ground targets. As for machine gun armaments, all other LaGG-3 fighters had a single 12.7 mm UB machine gun as their secondary, the I-301 has two 12.7 mm and two 7.62 mm machine guns for a total of four.

With four machine guns and a cannon mounted in the V of the engine, the I-301 is a well-armed fighter for its battle rating. In the hands of a skilled pilot, this plane can and will destroy anything it goes after with near-impunity, its speed and climb rate being fairly well-suited for Boom & Zoom tactics. However, because it is essentially an up-gunned LaGG-3, it is still vulnerable to being set on fire pretty easily (with all the fuel tanks in the wings), the engine overheating rather quickly (a critical factor in Realistic and Simulator Battles), and it can't turn-fight for long before slower, more manoeuvrable aircraft can catch up to it and shoot it down. Similar to the Yak-3P, its only camouflage has a red finish, which can make it stand out in the sky, though unlike the Yak, the red finish is darker and less eye-grabbing from a distance in certain environments.

In short, the I-301 is the grandfather of all the Lavochkin fighters. Its general flying style is almost identical to the production LaGG-3s, but with its five guns, it is very well suited for a more aggressive playstyle. As such, going after more armoured targets like four-engine bombers and attacker-class aircraft is viable in this aircraft, and dispatching enemy fighters even in full up-tiers will be easy.

A good tactic for flying the I-301 is to climb above all your enemies, using your good rate of climb. Once at altitude, you can pick and choose whichever target you want to pursue. Once you pick out a target, dive on it and demolish the enemy with your deadly armament. It is very important to note that if your target turns, do not turn with it. Convert your speed back into altitude, and then dive back on the enemy aircraft. If you are playing in an Arcade Battle, you will want to reload your cannon whenever your ammunition runs below about 25 rounds. Optimally you will be at bomber altitude, where you can take your time, reload and regroup.

If you are flying in Realistic or Simulator, you will usually not have to worry about breaking up in a dive, tearing your flaps, or ripping your wings; due to its construction, the I-301 is exceptionally tough. The I-301's roll rate and pitch authority are about average, but it has above average yaw authority. However, as you approach and go beyond 650 km/h (400 mph) your control surfaces will stiffen up.

Unlike the LaGG-3, the I-301 is equipped with four machine guns and a cannon that fires through the propeller hub, which gives this plane the high burst mass. The massive amount of firepower can take down any fighter if one is unlucky enough to have one on their six. As for ammo capacity, it carries a fair amount for its machine guns, carrying more ammo for its twin Berezin machine guns than the total ammo capacity of any of the LaGG-3s (cannon and machine gun combined); carrying enough ShKAS machine gun ammo equal to half the load of planes equipped with four of them such as the I-153 M-62 and the I-16 Ishak. However, the PTB-23 ammo load is abysmal compared to a load of a single VYa-23 cannon, in which it has only 81 rounds before it needs to be reloaded.

As with other planes with a multiple gun arrangement, Trigger discipline is the key to getting as many planes as you can before you run out of ammo for each gun. Since all the guns are centre-line mounted, it is critical that your aim is on point before pulling the trigger in short, controlled bursts. In the end, the full salvo of five guns can quickly dispatch lightly armoured fighters with ease, along with tearing through larger aircraft like bombers and attackers at a rather alarming rate. It is very comfortable at punching well above its rank, but because it is a prototype, it does not have any options for suspended ordnance such as rockets and bombs.

There are a select few enemies to be concerned about, one of which are enemy P-47s. Unless catching one in a level altitude, the P-47 can maintain a very high speed and firepower to use when attacking. They come in a Boom & Zoom style onto the aircraft and even if they miss, they zoom away with its speed, with the I-301 unable to catch it under its own speed. If they make the mistake of engaging in a turn fight, the I-301 will dance all over the slowed P-47 and a good burst into the fuselage can still tear apart a P-47.

Due to the previously mentioned firepower and flight performance, the I-301 can be a beast in the air. If trying to down a I-301, try to catch one when it is engaging with another aircraft, namely when it is swooping onto a target or turning against a fighter. While it is preoccupied with trying to destroy the enemy, pounce on it and take it out quickly before the I-301 can react.