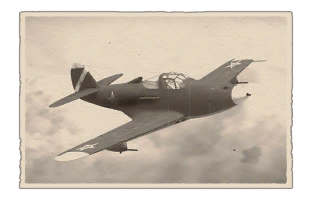 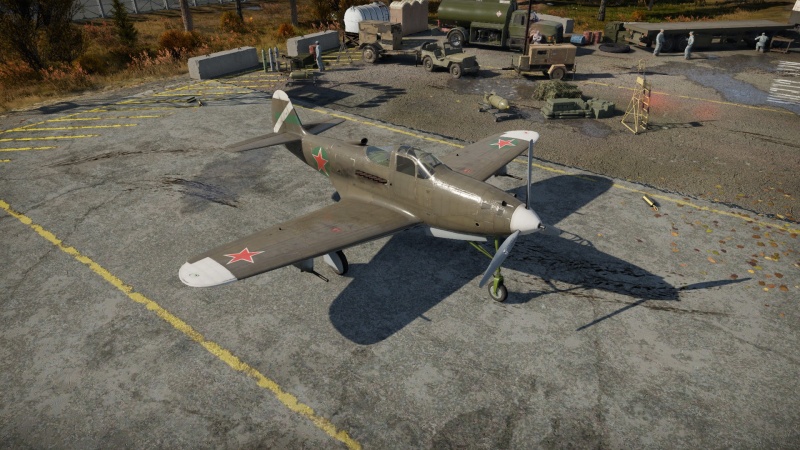 The ▂P-39Q-15 Airacobra is a premium gift rank III Soviet fighter with a battle rating of 3.3 (AB/SB) and 3.7 (RB). It has been in the game since the start of the Open Beta Test prior to Update 1.27. It was gifted to players who participated in the alpha test for a year or more.

Regarding flight performance for its rank, the P-39Q is, for the most part, an excellent aircraft. While not necessarily as manoeuvrable as spitfires of comparable battle rating. Its speed and climb rate can give experienced pilots the upper hand in a lot of fights, if they can utilise it correctly. Ideally, a player should try to avoid turn-fighting as the P-39Q shares a structural design flaw much like its predecessors, namely that the location of the fuel tanks are in the wings. With the fuel tanks situated where they are, this makes them much easier to hit and makes fuel fires more common on the P-39Q, which becomes fatal for the aircraft if the fires cannot be put out.

Note that due to the engine being center mounted in the P-39Q, the plane has a habit of going into horizontal spins in realistic/simulator battles, as the center of gravity has been shifted towards the center of the aircraft rather than tip, so try to avoid low speed manoeuvres while flying with the wings perpendicular to the surface.

The P-39Q represents the epitome of development in the Airacobra fighter series and has finally replaced all of the small calibre machine guns with 12.7 mm machine guns, giving the plane's machine gun fire a much tighter grouping due to a similar trajectory. This weapons give the fighter a much-needed accuracy boost to its secondary armament and makes it a much more viable back up to the 37 mm cannon.

While the 37 mm cannon is indeed effective against all types of aircraft and usually dealt out critical amounts of damage, the pilot must take care to use it only under optimal conditions. The 37 mm projectiles are both slow and inaccurate and firing at targets further than 0.5 km away is optimistic at best, as the shot will not connect. Furthermore, if going against other fighters, the 37 mm tends not to detonate its explosive filler and glance off if it comes in contact with a fighter wing if flying straight behind the aircraft. Always try to fire the 37 mm against fighters only when they expose as much of their plane profile as possible (i.e. in a turn), or when you are close enough to shoot their tail off.

The P-39Q-15 (USSR) can be outfitted with the following ordnance:

The general strategy at the start of a match for a P-39Q pilot should, in general, be to climb up and face enemy bombers as a priority, as the P39-Q has an excellent climb rate and will be able to intercept bombers before they can reach their targets. Get in close from a weak spot in the bombers gun coverage and use the 37 mm to destroy them, as bombers are huge targets and easy to hit the 37 mm. When the bombers are no longer a threat, engage enemy fighters. Be mindful of engaging them in direct head-ons as the 37 mm won't be of much use due to low velocity and accuracy.

The Q series became the most numerous and advanced of all the Airacobra family. It was a direct successor of the N series. The whole propeller-engine group remained unchanged: the Allison V-1710-85 engine, the reduction gear, the elongated shaft and the Aeroprop type propeller. Because of this, the flight characteristics remained virtually unchanged. However, a more efficient four-bladed propeller was fitted to the series from Q-21 to Q-25. As for the alterations, they mainly concerned the armament. The inefficient wing machine guns of rifle calibre were removed and usually replaced by two 12.7 mm Brownings in pods under the wings. But these were not always fitted. Most of the aircraft sent for export to the USSR had no wing machine guns. The 120-gallon suspension tank replaced the standard 87-gallon tank. A tank of 110 gallons (416 l) capacity was used in the Q-5 series.

The differences between the various Q series consisted mainly of the search for the optimum combination of armour protection and internal fuel tank capacity. Takeoff weight, range and load varied from version to version. Altogether, beginning with Q-1 and ending with Q-30, eight series of the fighter was built, to a total number of 4699 aircraft. Of these, 3291 became exports to the USSR. Furthermore, a few reconnaissance versions of this aircraft, fitted with photo-cameras, were built by the Q series.

This aircraft was not used at all in Great Britain, because the high-altitude speed characteristics of the Cobra were considered unsatisfactory. The US Army Air Corps used the fighter mainly in the Pacific, in places in which it was impossible to use any aircraft other than the Cobra because of the condition of the airstrips, where the P-39, because of its tricycle landing gear, had no difficulties. Nevertheless, the American pilots feared and disliked the aircraft, calling it "Iron dog" because of its rear-mounted engine and rear centring. Documented cases told of the aircraft being deliberately crashed to speed up re-equipment with the more popular P-38. 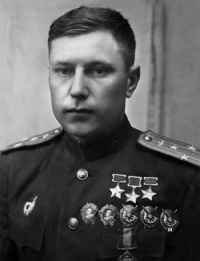 Alexander Pokryshkin flew the ▂P-39Q-15 Airacobra once in which he landed on a stretch of German autobahn for a propaganda stunt in 1943.