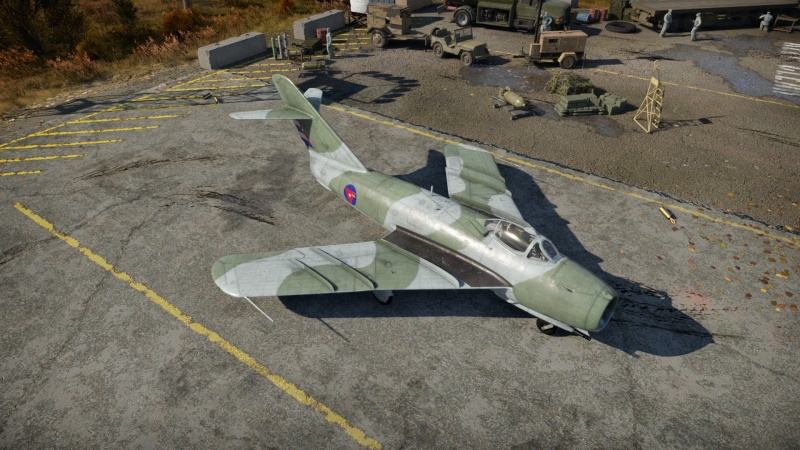 The MiG-17AS is a premium gift rank V Soviet jet fighter with a battle rating of 9.0 (AB/RB/SB). It was introduced in Update 1.91 "Night Vision". It was removed from the Gaijin store after the 2022 May sale and is currently unobtainable in-game.

As a MiG-17AS flying in Cuban colors, the plane represents a fighter-bomber version of the MiG-17 series that was exported to Cuba in 1964.

The MiG-17AS is powered by the Klimov VK-1 jet engine, the same as the engine found on the MiG-17. This engine performs well at higher altitudes, and affords this vehicle much better high-altitude flight characteristics than its American counterpart, the F-86. This also means that the MiG-17 performs much better in vertical manoeuvres than many other aircraft. The engine also gives this vehicle very good energy retention and a high climb rate. At high speeds (>900 km/h), the aircraft experiences compression and loses roll and pitch authority. 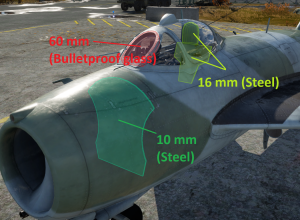 The armour plates on the MiG-17AS.

The MiG-17AS armour around the pilot is a bit more substantial than that seen on F-86 Sabres. With a large 10 mm steel plate in the nose, this armour protects both the pilot and the fuel tank from any glancing frontal shots from going through and causing damage. A 60 mm bullet proof glass is also present in front of the pilot, which may also offer some ballistic protection against machine gun rounds. However, the glass and steel armour are not substantial enough to take a head-on attack from a similar aircraft, so don't use these as a safety net from head-on attacks. 16 mm steel plates cover the pilot's seat, which will protect the pilot against any glancing shots approaching from the rear, but it does not protect the fuel tank.

The MiG-17AS structure overall is minimal, with the a lot of empty spaces in the fuselage and tail, but the control surfaces all over are still vulnerable to being cut and driving the MiG-17AS out of control. Although there are two self-sealing fuel tanks on the MiG-17AS, the largest one is seated right behind the pilot and so can be prone to being hit. This means an enemy that misses an attempt at a pilot snipe can still have a chance of hitting the fuel tank and igniting it, causing crippling damages to the overall MiG-17AS structure.

Like the MiG-15 before it, if the tail vertical stabilizer gets knocked off the plane, so are the elevators, leaving the aircraft helpless if not already determined a victory by the score system to the offending enemy.

The Nudelman-Rikhter NR-23 was a 23 mm autocannon which was widely used on many Soviet aircraft. The NR-23 has a faster muzzle velocity over the N-37D by 200 m/s, firing them at the same time will not result in them landing in the same place as the N-37D will begin to drop sooner. Firing at around 900 rounds per minute, the NR-23 can unload a good amount of ammunition downrange, however, with a limited supply of only 80 rounds per gun, it is best to fire in small bursts when the pilot has a good gun solution. Firing in "hopes" to hit the target will result in many missed and wasted shots and may very well cause the MiG-17AS to go dry just when those rounds are needed the most.

For fast-paced air-to-air combat, the MiG-17AS can be outfitted with two R-3S missiles (reversed engineered AIM-9 Sidewinder also known as the Vympel K-13 or NATO AA-2 "Atoll"). This missile works best when flying behind the target aircraft to allow the system enough time to gain a lock. Once the lock is achieved, the missile can be fired. It is best to fire between 1 and 1.5 km from the target to allow for the least amount of reaction time and potential for evasive action on the enemy aircraft's part. Firing a missile from a greater distance is possible, however, the more that the enemy fighter can react to the missile launch, the better the odds are that they will be successful in evading the missile. If the missile is evaded, all is not lost, many times the enemy fighter had to perform several energy bleeding manoeuvres to evade the missile which may ultimately set them up for the MiG-17AS pilot to close in and eliminate the target with their 37 mm and 23 mm autocannons.

As for cannon armament, the MiG-17AS has three high-calibre cannons. This may sound perfect at first glance, but the armament setup on this plane does create difficulties on further consideration. First of all, these cannons are all slow-firing, and it is not uncommon that a fast-moving enemy will slip between cannon shells and avoid destruction. Also, the shells have a fairly low muzzle velocity compared to that of other jets at this rank, and have quite a noticeable drop. Combined with the slow firing speed, this makes aiming difficult at the best of times, and extremely challenging at ranges over 400 m. But as if all of that wasn't enough, the cannons are mounted below the nose of the plane, making aim difficult for players inexperienced in flying with this gun positioning. Furthermore, all three cannons have quite low ammo counts, so trigger discipline is key. All in all, this vehicle's guns are certainly not its strong point, but keep in mind that the aircraft's admirable flight characteristics can more than make up for this weakness: when the enemy is stalled out in front of this aircraft, its guns are more than enough to guarantee the kill.

The MiG-17AS has the option to mount 2 x 250 kg bombs. However, these bombs considerably harm the vehicle's flight performance, and have quite low destructive power. Using them against armoured ground targets is often difficult.

In most cases, a better option is to use the 2 x S-21 air-to-ground rockets available to this aircraft. These each contain a very good 9.95 kg of TNT, and may be fired separately. They also have quite respectable penetration, and will be able to penetrate the roof armour of many of the tanks that this vehicle might face in ground RB. They also have a decent velocity, and are easier to aim than bombs.