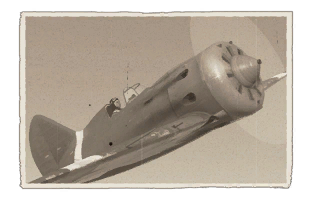 The I-16 Type 10 is equipped with four ShKAS machine guns chambered with the 7.62 x 54R cartridge, a cyclic rate of fire of 1,800 rpm. Two of them are mounted above the engine cowling and carry 650 RPG while other pair are mounted on the wings and have ammo load out of 900 rounds each. Historically the cowling mounted machine guns were synchronized to propeller spin resulting in a rate of fire of 1,460 rpm, the preliminary analysis seems to suggest that the synchronization gear is not modelled in the game and all four guns fire at 1,800 rpm.

While the increase of the armament by double may seem already quite an upgrade it has to be remembered that the extra pair of light machine guns are fitted in the cowling, which means that convergence range is not quite as important for effective fire when compared to the wing mounted only armament of the Type 5. Of course, it is still not to be neglected, and as with any light machine gun armed vehicle, a relatively close gun convergence range of 150 to 400 meters is generally more effective. As with any other ShKAS machine gun armed aircraft, jamming due to overheat can be a serious threat although not quite as crippling as it is with the Type 5's (losing a machine gun in Type 5 means losing 1/2 of your firepower, losing one in Type 10 mean losing "only" 1/4 of your firepower). Unlike the I-16 Type 5, Type 10 is equipped with a PAK-1 reflector sight making overall aiming at close range easier than with a telescopic sight. It has to be kept in mind that in spite of the increased weight and more powerful armament, the lack of trimmer control and plane's inherent stability make it a rather lousy gun platform compared to latter heavier aircraft.

Unlike the Type 5 that precedes it, Type 10 does have the ability to mount armament on its external pylons. This armament in-game is limited to six wing-mounted RS-82 rockets, unfortunately these rockets had a somewhat lacklustre performance against armour (although they are a still a considerable upgrade compared to just light machine guns) and can be somewhat effective against exposed ground targets and enemy aircraft with the use of good aim and a bit of luck. Still, this armament is overall unreliable and it should only be taken in very specific situations if air combat is expected.

The I-16 type 10 can be outfitted with the following ordnance:

Like its predecessor the strength of Type 10 depends to some extent on its versatility, being able to outspeed most biplanes and outmanoeuvre most monoplanes it faces. However, because of the plane's higher BR in all game modes the Type 10 will face high-performance monoplanes like the Spitfire Mk I/II, the Bf 109 E/F, the C.202, the P-400 and early Yak's and LaGG's in mixed battle matchmaking a lot more often than its predecessor. This can be quite problematic since the aircraft's overall performance isn't much better than the Type 5's and is actually inferior in some regards. The Type 10 however somewhat makes up for it due to the increase in firepower which allows it to take much better advantage of split-second firing opportunities since while its four light machine gun armament is generally not enough to kill in a quick burst it can at least hit and damage enemy aircraft a lot more efficiently than just two wing-mounted machine guns.

The defensive and offensive tactics that work best for the I-16 Type 10 are similar to the ones that can be employed in Type 5, mainly the use of scissors and short vertical manoeuvres, the main difference is that the Type 10's lower roll rate makes the use of roll rate alone as an evasive tactic a lot less feasible than with its predecessor while the increased weight may prove decisive while using vertical manoeuvres as a way to avoid light fighters like the A5M4 or the Ki-27. The plane is still very far from more modern aircraft like the Yak-1, the Ki-44, the Bf 109 E/F and the Spitfire Mk I in speed and vertical manoeuvrability forcing the Type 10 to stick to the defensive if facing a competent pilot in any of those high speed aircraft. The climbing, speed and diving acceleration receive a timid upgrade when compared to the Type 5 with particularly the former still proving a rather good asset (even much faster aircraft like the Bf 109 F or the Spitfire Mk I aren't that much better at climbing than the Type 10 at low attitudes meaning that even when facing them there's still hope to do so at a similar energy state). The plane has a rather nasty habit of starting to bank side to side and even sometimes turning upside down while trying to pull out too sharply from a high-speed dive, its occurrence can prove deadly at low attitudes.

One area in which Type 10 is a clear upgrade over the Type 5 is the ability to intercept bombers and attackers, while the plane is still very slow and quite fragile and its armament isn't exactly overwhelming it is still quite an improvement over the Type 5 in this task. The ability to mount rockets also helps to increase the aircraft's effectiveness for ground attack and secondarily the possibility of taking down bombers with a good enough aim.

The I-16 Type 10 was the next step in the development of the I-16 series after the Type 5 following the lessons learned by previous combat experience in Spain. Development of the aircraft started in December 1937 with the plane being tested and entering production through the winter, by March 1938 it was already being put into operational service. The main changes when compared to its predecessor are an increase in machine gun armament as well as the ability to mount light ground attack armament, paired with a slight increase in climb rate and speed through the addition of a new M-25V engine (early production models employed the M-25A instead), the addition of flaps, the removal of the closed cockpit and the addition of the PAK-1 reflector sight in place of the OV-1 telescopic sight (note that the later modifications were already seen in late Type 5 production models). Some models were mounted with non-retractable skis in place of the standard retractable landing gear. A total of 934 I-16 Type 10 were built by the time production ended in 1939.

The I-16 Type 10 was first deployed in combat in March 1938 in Spain becoming the backbone of the Spanish Republican Air Force through the remaining half of the conflict. While only a modest upgrade in a lot of performance parameters over earlier I-16's, it was seemingly enough to overcome the previous advantages held by the Condor Legion Bf 109 B causing the replacement of this aircraft by the upgraded Bf 109 C's and Bf 109 D's. Like its predecessor, the Type 10 was capable of facing off against its rivals not only at low altitude but also at high altitude, the Jumo Powered Bf 109's still held a significant advantage. In an attempt to counter this advantage several I-16 were retrofitted with supercharged Wright Cyclone R-1820-F-54 engines which allowed for an increase of the plane's practical service ceiling and overall performance at high attitude. The Type 10 would only be completely surpassed by the Bf 109 with the arrival of the Bf 109 E in 1939. After the war, several dozens of I-16's passed into service with the Spanish Air Force until 1953.

The I-16 Type 10 was also one of the most important VVS fighter during the air engagements over Khalkhin Gol and Finland in 1939, in the former conflict the arrival of this model in big numbers, as well as experienced aircrews, played an important role in allowing the VVS to achieve air superiority in the latter half of the conflict. The I-16 Type 10 was also supplied in big numbers to Chinese Nationalist Air Force where it proved quite effective against the early A5M's and IJN bombers and attackers but fared very badly against the modern and much better performing A6M2 Zero. By the time of German invasion of the Soviet Union and in spite of its obsolescence a lot of I-16 Type 10 remained in service with the VVS (although a lot of them had been converted to Type 18/24 standards), a lot of them were destroyed during the initial phases of the conflict but those that survived were used as fighters and light ground attack aircraft until early 1944.