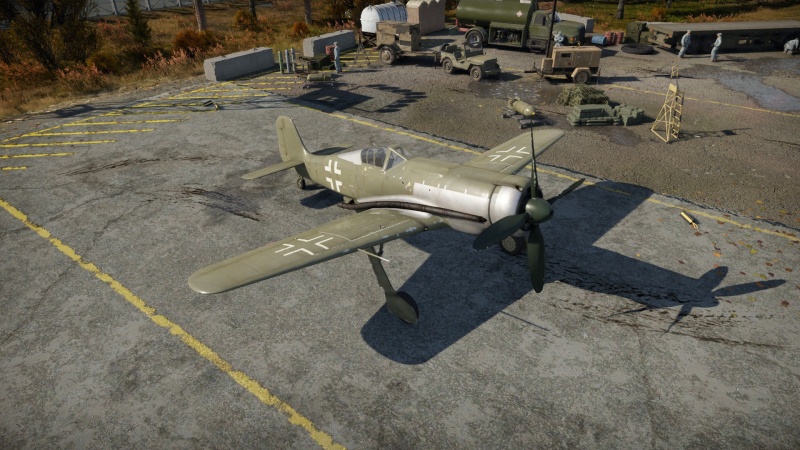 The Fw 190 C is a premium gift rank IV German fighter with a battle rating of 5.3 (AB) and 5.0 (RB/SB). It was introduced during Update 1.85 "Supersonic" as a reward for the 2018 Festive Quest for ten Christmas toys for pilots earned during the event. This variant receives a high altitude supercharger meaning it will exceed in performance at higher altitudes, this is complimented by its decent climb rate. But this plane sacrifices 2 wing mounted cannons for enhanced flight capability.

This aircraft has a very unique play style in regards to the other 190s.It can turn reasonably well at most speeds, having turning capabilities akin to that of the 1st 190 in the tech tree, albeit at a major cost in energy. This fighter has a mediocre climb rate, around 15.6 m/s (RB/SB) which is below average for the BR range it sits in. The most unique feature this aircraft possesses is its supercharger allowing it to perform at altitudes well above 7km.

This 190 has a fairly slow top speed at sea level, so you won't see it running away from most planes but at high altitudes, it is reasonable fast.

Like any other 190, the roll rate is exceptional allowing for good firing solutions during dives and good defensive flying capabilities. As mentioned before, the turning capability of the 190 is fairly decent and not something to glance over. Although, it can't function as a dedicated turn fighter, it can perform very well in dogfights. In addition, the 190 has a very low stall speed which is a good asset to have in vertical dogfights. Another point to mention is that this 190 has an off-centre off mass (possibly due to the intake at the bottom of the plane) which is very noticeable during low speed maneuvers.

This plane is not suited for close quarters dogfighting, but despite its low mass excels at energy fighting. It will not last long in a turn fight. The front armoured glass plate of the cockpit is 57 mm thick, and the pilot is protected from the rear by 2 plates, 8 mm and 12 mm thick respectively. The engine is prone to damage in head-ons due to the lack of armour protection around the engine cowling.

The Fw-190 C receives 2 MG 151 20 mm cannons mounted in the inner wings behind the propeller, and 2 MG 17 7.92 mm machine guns mounted in the nose, the standard for German aircraft at this point in the tree. The 20 mms get 500 rounds of ammo with their respective belts making them considerably deadly and optimal for longer battles. The MG 17s get 1,800 rounds of ammo but do lesser amounts of damage, best used in combination with the 20 mms, but can be used to effectively peck damage lighter aircraft.

The Fw 190 C is an experimental high-altitude fighter powered by the DB-603 engine, developed from the same project that yielded the highly-effective Fw 190 D series aircraft. Designed to be a high-altitude interceptor, the Fw 190 C was designed with a unique power plant consisting of the DB 603 engine mated to an underslung turbocharger. While moderately successful, the Fw 190 C was never ordered into production, being superseded by the Fw 190 D and Ta 152 programs.

Following the success of the Fw 190 A series, Focke-Wulf pursued the development of several variants which would be capable of high-altitude flight, as the Fw 190 A’s radial engines suffered at higher altitudes. The first such design was the Fw 190 B series, which were essentially converted Fw 190 As with a pressurized cockpit and engine boosting. However, Focke-Wulf soon pursued the development of new inline-engined variants of the Fw 190 A, using the Daimler-Benz DB 603 and the Junkers Jumo 213 powerplants. The Junkers-powered Fw 190s would later be spun off into the highly-successful Fw 190 D series, while the DB 603 engine was given to the experimental Fw 190 C.

The Fw 190 C featured a DB 603 inline engine mounted in an extended engine cowling; despite this, the Fw 190s retained the cowling of the Fw 190 A. The aircraft featured a huge underslung Hirth TK 11 supercharger designed to boost engine performance at higher altitudes. The aircraft first flew in this configuration in December of 1942. In the same month, the German Air Ministry (or RLM) ordered 727 Fw 190 Cs; however, this order was soon cancelled in favour of the more-successful Fw 190 D and Ta 152. As a result, the Fw 190 C would never enter serial production and remained a prototype aircraft project.