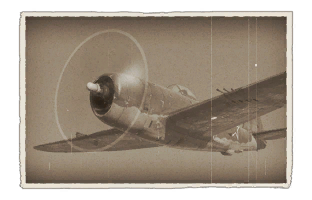 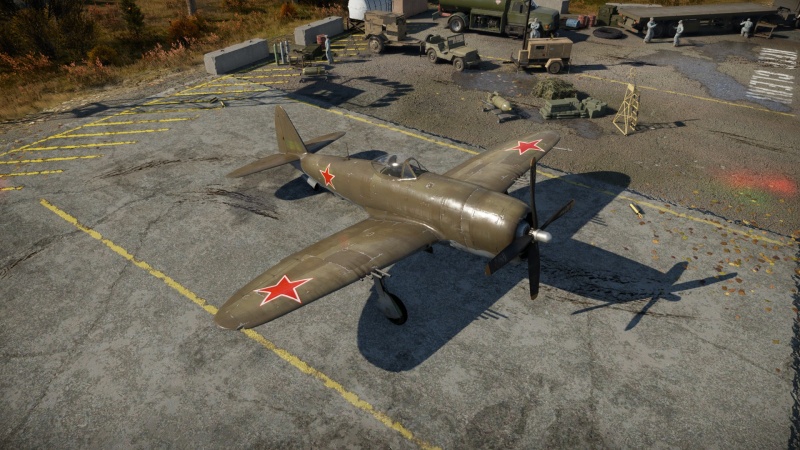 The ▂P-47D-27 Thunderbolt is a premium rank III Soviet fighter with a battle rating of 3.7 (AB/SB) and 4.3 (RB). It was introduced in Update 1.43. This aircraft is a Soviet lend-lease version of the iconic American P-47D-25, with only minor differences including a camouflage colour scheme and Russian forged and welded FAB bombs weighed in kilograms instead of the American bombs AN-M series bombs weighed in pounds.

The fighter does, however, retain the eight deadly 12.7 mm M2 Browning machine guns which this fighter is renowned for, easily ripping off wings and also setting fuel tanks ablaze. The fighter's overall good energy retention makes this an excellent Boom & Zoom fighter but is restricted by its slow initial climbing ability. To counter the slow climb, side climbing at the start is recommended if looking for an altitude advantage to make the most use out of Boom & Zoom. This fighter also doubles as a great ground attacker, mounting an impressive payload (1,250 kg total!), unfortunately, the US did not include HVAR rockets with the lend-lease package, thus they are not available for the Soviet version.

The P-47D-27 (USSR) can be outfitted with the following ordnance:

As with the normal P-47D-25, the D-27 can be used one of two modes, first as an excellent Boom & Zoom fighter, using its great energy retention and amazing armament against high flying bombers and fighters. Another option is as a fighter bomber, utilising the impressive payload and adequate diving characteristics of the P-47 (be aware of dropping order of the bombs, the 500 kg bombs drop first and then the 250 kg under the fuselage is dropped). The 500 kg bombs are able to make short work of any tank whether light or heavy in its tier, but the 250 kg bomb can only provide enough explosive power to destroy softer targets, like armoured cars and SPAA. The way both 500 kg bombs drop should either be used against a group of tanks (combined battles) or against large pillboxes. Other than that, the P-47 can be used in multiple roles, unfortunately, using bombs restricts flight to only staying at a low level where the P-47's engine is less effective.

If using it as a high altitude fighter initially side climbing is recommended, as it gains a vast advantage over other enemies. The hit and run tactics work best for the P-47, singling out a lone fighter below the P-47, diving towards them and a 2-second burst from the M2 Brownings will most likely destroy them. Always try to avoid a head-on engagement, as the engine is large and exposed from the front and most likely break down if something manages to hit it. If willing to engage a heavy bomber main targets should be the wings and elevators, as they are easy targets for the P-47.

The Soviet P-47 can provide lethal ground support, but crucial life-saving decisions should be applied by the pilot.

Once in the air, is prudent to scan the air for targets (check six first), if none are present, the P-47 can proceed to the battlefield and find a bombing target. If there's one or more enemy aircraft in the combat zone. The pilot is advised to immediately release all bombs; these bombs will only reduce the manoeuvrability of the P-47 if combat actions are to be taken. With all the altitudes disadvantage and dogfight manoeuvres, a P-47 with full bomb load only will be an easy target. Soviet pilots should keep the discipline of bomb disposing once air combat is about to occur. Pilots could also retain their bombs anyway, but then they would be forced to engage in Boom and zoom tactics due to the weight of the plane.

If there's no enemy aircraft, the P-47 can continue to use the powerful ordnance. Once the payload is disposed of, is recommendable to leave the combat zone and return to the airfield for rearming. If the P-47 stays at low altitude and near the battlefield, is likely to be engaged by the rear, leading to a disadvantageous duel.

Oppositely, the P-47 can be cleared from all drag weight and be used as an interceptor and air defence fighter. Don't forget to get some altitude once in the air; sideclimbing will allow to check the enemy air-spawn zone and plan combat tactics accordingly. The eight Browning machine guns will provide adequate damage, enemy planes regularly won't resist a lot of bullets from them.

Enemy bombers and attackers are amongst the easiest to destroy using this tactic. Which also helps to protect the allied tanks fighting on the ground.

In Simulator / Enduring Confrontation, bulkier planes that suffer in AB & RB shine and that of course includes the P-47. Sitting at BR 3.7, the lowest BR for rank 3 EC, it can respawn infinitely which makes it a great learning platform for new EC players. In Sim, the P-47 has stable control handling, all-round unobstructed vision and fast speed, and it offers a wide range of additional armaments of bombs plus the original 8 x .50 calibre, meaning it is an excellent multi-role aircraft. It can perform base-bombing, ground pounding, bomber intercepting and traditional Boom and Zoom fighting.

For base bombing, choose the maximum setup of 1 x 250 kg, and 2 x 500 kg bombs to maximise the damage. The fastest way to get to a base is to remain at tree-top level upon taking off. This way there is no need to climb so the P-47 can pick up quite some speed like that, even with the full bombload. It is also harder to be seen, since the P-47's dark colour will blend in with the ground for some maps. When approaching the base, check its position with the minimap to ensure it's the right target. When the base fills up the gunsight, pull up to around 500 m and then dive at the base at a rather shallow angle. When the gunsight slices past the furthest edge of the base, release all the bombs, bank to the direction of the nearest friendly airfield, descend back to tree-top level and fly back. If lucky, P-47 might even catch some enemy bombers that just took-off from a nearby airfield; they will be some nice RP. Overall, base bombing is the safest way to get rewards.

For ground pounding, pilots can choose to take the full bombload if desired. Use the bombs and rockets to take out pillboxes and tanks. The aiming method for bombs is pretty similar to base bombing, but there are differences for the 250 kg and 500 kg, as their drop are different and because now the targets are much smaller. Dive at a shallow angle to approach the target, try to get as close as possible but avoid crashing into the ground. When the gunsight slices through and just above the target, drop the 500 kg bombs. When the target is at the centre of the gunsight and fills up around 1/3 of it, release the 250 kg. The 8 MGs are perfect for killing trucks, AA guns and artilleries as they have plenty of ammo.

Be more careful when hunting bombers, since with the Sim control (whether it be mouse joystick or a real stick) the plane will manoeuvre much more gently, making itself a great target for the bomber's gunners. Don't follow behind a bomber's rear unless sure that its tail gunners are unconscious. Chasing behind a bomber makes the P-47 pretty much stationary for the tail gunners, bullets will shower. The big radial engine of the P-47 will usually get damaged. Instead, before launching an attack, get an altitude advantage over the bomber by flying around 2 km above it.

The bomber should only fill up about 1/6 of the gunsight. The best position for an attack is at the bomber's high 6 so the P-47 can adjust the lead much easier. Dive at the bomber, but not directly at it. To maximise the damage it is better to aim for their wings and engines, as the fuselage usually soaks up quite some bullets. Only fire when the bomber is about to pass in front of the guns. This short window might seems inadequate to do anything, but the 8 MG on the P-47 are actually quite destructive, as sometimes it only takes one bullet to set the target aflame.

As for dogfighting, because almost all aerial battles in Sim occurs at below 3,000 m, the P-47 can easily climb to this altitude and gather up lots of speed before engaging a battle. The tactic is similar to the RB one above. If unfortunately, P-47 finds itself being chased , do a large and smooth turn towards the nearest friendly airfield to avoid bleeding too much speed. Then shallow-dive towards allied airfields. The P-47 can quite easily outrun opponents like the A6M2 or Bf-109 E-1, but struggles to outrun Bf-109 F/G, FW-190 A-1or other P-47s, like the German P-47▀. Another way of disengaging is to do a sudden Split-S to dodge under the chaser. The average Sim players will now try and see where the P-47 went. P-47 can then run for to the airfield or shallow climb for another attack.

The Soviet Union received numerous aircraft through the Lend-Lease program, the P-47 being one of them. By the end of the war, the Union had 118 P-47s.