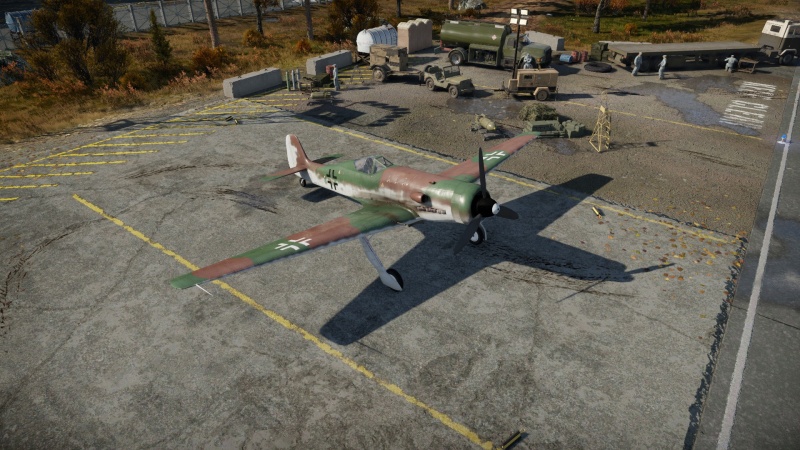 While the Ta 152 H-1 is the ultimate evolution of the Fw 190, the Ta 152 C-3 takes the Fw 190's concepts to their limit. Don't be dissuaded however, the H-1 is a different beast altogether. Fast, manoeuvrable, and stable past 350 km/h, it is more nimble than most enemies at its BR, has a decent climb rate, short turn time (especially with landing flaps), and above average roll rate. The Ta 152 H-1 trades the incredible roll rate of the Fw 190 for a great energy retention and turnfighting ability. You will outclimb most competitors and will usually have an altitude advantage due to the interceptor airspawn. 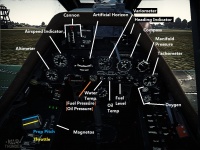 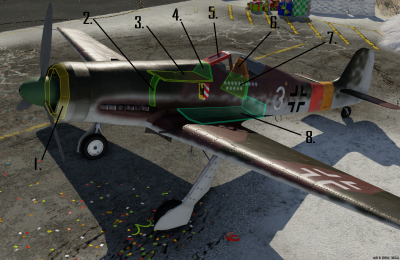 Armour diagram of the Ta 152 H-1, corresponds to the list on the left

The Ta 152 H-1 is a high altitude fighter with a wide wingspan and good manoeuvrability. Unlike its heavier cousin the Ta 152 C-3, the H-1's best performance is reached when flying above 9,000 m (~30,000 ft) altitude as this is where the engine performs at maximum efficiency. A Ta 152 H-1 with altitude advantage is a deadly force to be reckoned with, having a great dive speed and energy retention, making it an efficient Hit and Run plane. With an interceptor airspawn, the climbing phase is shortened. However, the pilot must be aware of planes with a high climb rate like Spitfires or P-51s, as they can absolutely possess an altitude advantage at first contact, despite having to take off from the ground.

Even though the Ta 152 H-1 is an high altitude fighter, it can still perform at medium and low altitudes. Being quite manoeuvrable, it can do well in a dogfight against certain opponents, as you can quickly turn the tide of a dogfight due to your MER and good turn rate with combat flaps. However, some nimbler opponents will outmanoeuvre it easily if they possess an energy advantage. In these situations, it is best for the Ta 152 H-1 to use its primary strengths (speed, turning, and manoeuvring energy retention (MER)), to gain the upper hand. Another role for the Ta 152 H-1 is the interception of heavy bombers at high altitude. Even if the bomber is trying to escape, the Ta 152 H-1 will quickly catch up thanks to its powerful engine.

The armament of the Ta 152 H-1 is fairly powerful: the Minengeschoß-firing 30 mm MK 108 and 2 x 20 mm MG 151 have enough power to inflict heavy damage on most targets it will encounter. Though be aware that the MK 108 only has 90 rounds at its disposal and is most efficient at close range. Meanwhile, the two MG 151 have 175 rounds per gun for a total of 350 rounds, and can be used with much more liberty.

Enemies to be aware of in the Ta 152 H-1 are opponents such as the Spitfire F Mk 24, F8F, P-51H-5-NA, F2G-1 and Ki-84. These foes can intercept and force the Ta 152 H-1 into dogfights on equal terms, trying to gain an energy or altitude advantage is key before engagement with these aircraft.

Answering the call of the German Air Ministry (RLM – Reichsluftfahrtministerium), Focke-Wulf modified their Fw 190 design and branched out in three directions. The three prototypes, in turn, had one to become the new existing Fw 190D (Ta 152A) series (after the D-9), the second prototype would become a dedicated high-altitude bomber (Ta 152B) while the third would become a ground-attack aircraft (Ta 152H).[2] Though adjustments and modifications were made including usage of a different engine, the ultimate results determined these aircraft did not provide enough improvement to continue moving forward and both the Ta 152A and B projects were cancelled. One bright spot from this was that the airframe built for the Ta 152B (the V21 airframe) showed promise and efforts were focused here to create the Ta 152C prototype.

Adjustments to the Fw 190D-9 fuselage resulted in its extension and addition of hydraulics to control the flaps and landing gear. These adjustments threw off the normal center of gravity and made the aircraft off balance, resulting in the lengthening of the nose of the aircraft to normalize the CoG. The length of the wings was slightly lengthened and due to shortages in aluminium, steel spars were utilized aiding to the strength of the wings, but also at a price of extra weight.[2]

The Ta 152 C-3 ended up with wings .5 m (1.25 ft) longer than the standard Fw 190D-9 to aid in supporting the new steel spars and hydraulic hardware in the landing gear and flaps. The 'C' variant did not incorporate a pressurized cockpit. While designed to work at lower altitudes (though above 25,000 ft or 6,100 m), the fighter was outfitted with a single 30 mm MK 108 Motorkanone which was mounted through the center propeller hub with four MG 151/20 mm cannons, two of which were mounted in the upper fuselage and two more with one in each wing.[1] This cannon setup is enough to devastate any aircraft which is on the receiving end of the 20 and 30 mm rounds. The Ta 152 C-3 entered the war too late and in too little numbers to make an effective difference. Shortages in replacement parts became extremely difficult if not impossible to find reducing the ability of the Ta 152 C-3 to be used to the fullest of its abilities.[2]

The Ta 152 H-1 was refined to be more of a high-altitude fighter even so over the Ta 152C. Wings were extended a full length of 14.4 m (47.4 ft), though this lowered its overall speed, it provided substantial improvement with high-altitude handling. To aid the pilots in the higher altitude flights, the H variant was outfitted with a pressurized cockpit. The cockpit was pressurized to approximately a level comparable with 8,000 m (26,250 ft) and the canopy was comprised of two layers of which the outer was a thicker material with a thinner inner pane. To compensate for any moisture which could form between the panes, silica gel was added to aid in stemming any fogging. Unlike the 'C' variant, the 'H' only utilized a single 30 mm MK 108 Motorkanone firing through the propeller hub along with just two MG 151/20 mm autocannons, both of which were mounted in the upper fuselage. Eliminating the two wing-mounted cannons aided in increased manoeuvrability and less weight to make up for some of the additional weight added due to the pressurized cockpit system.

Overall the Ta 152H variant was one of the fastest piston-engine fighters to emerge during World War II, cruising around 750 km/h (465 mph) while at around 10,200 m (33,000 ft). The Ta 152H also employed the usage of GM-1 nitrous oxide boost and MW 50 methanol-water boost to briefly increase performance in the aircraft and if necessary, both could be applied at the same time.[1]