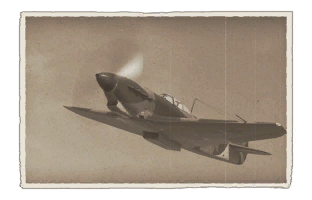 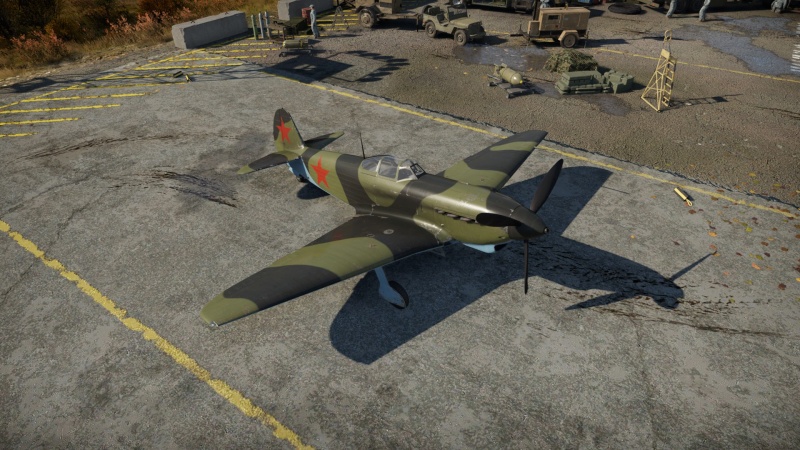 Since the Yak-1B, the Yak-9 is the next notable "Upgrade". While retaining the same great 20 mm cannon, as well as the 12.7 mm MG, the Yak-9 gained a number of minor upgrades such as:

All of this translates in-game to an even better version of the excellent Yak-1 series. The Yak-9 is the first of a number of modifications (the B, K, M, P, T, and U variants are also in-game). While tactics and methods deviate little from the previous Yaks, this plane is like being used to flying a Bf 109 E and then suddenly being given a Bf 109 F... not much, but experienced Yak pilots can feel the difference!

Focus on cooling and engine modifications first! Once the coolant systems and engine is upgraded, flying at 90% power will never overheat the engine! Then focusing on ammo belts can benefit greatly, since the default ammo belt is rather lacklustre. After that, the modifications for new guns should also be considered for firing the guns longer without jamming. Past that, it is pilot preference.

The Yak-9 is armed with:

Both "Universal" and "Stealth" ammo belts for the cannon are effective against all planes, and the "Ground Targets" belt gives the most HE rounds for most targets. The cannon's "Ground Targets" belt is also capable of penetrating light tanks if the player hits them in the rear. Low gun ammo along with no other ordnance of any kind (no rockets and bombs of any kind) make this plane weak against even soft unarmoured ground targets.

In Arcade Battles, the basics of Yak fighting from the previous iterations continue. Unlike Realistic or Simulator battle modes, there is no need to worry about the wooden wings ripping off, engine overheating, or being in the air without ammunition for long, which gives the Yak more liberty in its mode of attack.

It is recommended to climb to 3,000 m as this will allow the Yak to have a altitude advantage over many opponents who will head towards the ground while playing into the Yak's preference for low-altitude fighting. Mind your engine temperature and use WEP sparingly while doing this.

Though a full liberty of targets can be chosen from anything below the Yak, try to pick opponents that are unaware of the Yak's presence. Dive down and gain speed while conducting a Boom-N-Zoom attack. The center-mounted 20 mm and 12.7 mm guns acting together when fired is good enough to sufficiently damage most aircraft with a single a pass. The Yak is free to climb again and regain the altitude advantage, or turn and re-engage the enemy with another pass as the Yak's turning ability is quite good in high energy, at the expense of the pilot's G-force resistance and stamina.

Use trigger discipline when firing the 20 mm and 12.7 mm guns as there is a relatively small ammunition load for the two. However, due to their center-alignment on the Yak's nose, there is no need to adjust for convergence, making fire adjustments much easier for the pilot. Once the crosshair is sighted right onto target, most shots on an fully upgraded gun will hit the mark. It is recommended to hit for the weaker structural parts of enemy aircraft such as the wings, as the ammunition can rip them apart in a good burst.

However, all these require the Yak to have an energy advantage over an opponent. Prolonged turning engagements or other manoeuvres will gradually drain the Yak of its energy and slow it to a crawl. In this state, the Yak is in its most vulnerable to enemy fighters. Once this lower speed is noticed, quickly withdraw from the combat and try to gain speed and altitude, the former especially if an enemy fighter suddenly starts to attack. Where previous Yaks were good multipurpose turn-fighters, the Yak-9 also makes excellent use of energy-fighting tactics, so keep this in mind.

Stay low, watch your ammo, and watch your engine temperature. Avoid excessive diving, since the wings are still made of wood!

Very accurate center-mounted guns are easy to master for the player compared to planes with wing mounted armament. Sadly this benefit is overshadowed by the low ammo load that most of the time enforces strict trigger discipline (especially for the cannon). Long range attempts can be carried out by the 12.7 mm HMG, but rather as a means of luring fleeing enemies into evasive manoeuvres rather than taking it out.

The Yak-9 has some vehicles it needs to consider when engaging.